Warning: Parameter 2 to wp_hide_post_Public::query_posts_join() expected to be a reference, value given in /home/customer/www/annieandthebeast.com/public_html/wp-includes/class-wp-hook.php on line 308
 Through the Rockies to the Alaska Highway – June 2018 – Annie & The Beast
Skip to content 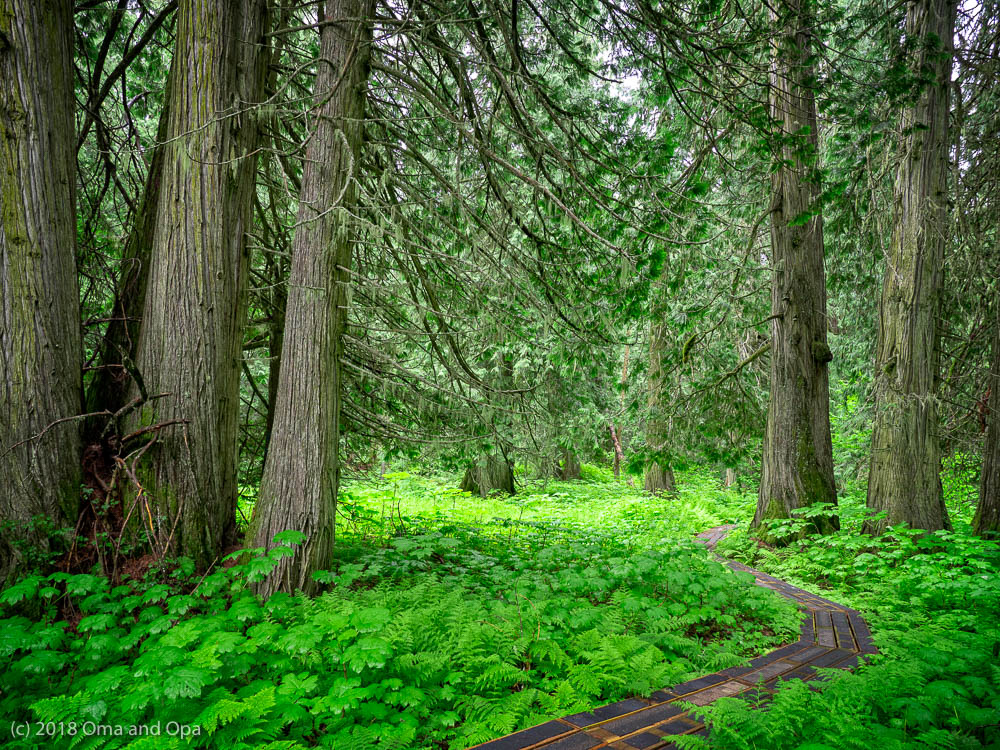 From Jasper, we had two possible routes to Dawson Creek and the start of the Alaska Highway. The “usual” (shorter) route would be to head a bit east and take the Bighorn Highway north. However, we had heard several reports, including from new friends of ours that were just ahead of us, that road conditions were fairly bad.

The other option was to head west along the Yellowhead Highway to Prince George and then take the Hart Highway north-east. This route was 150 miles longer, but kept us in or near the Rockies for most of the journey and allowed us to stop at The Ancient Forest, which had been recommended by someone when we were in Writing-on-Stone Provincial Park. We chose better roads and scenery and took the longer route.

After finishing our exploration of Maligne Lake Road, we left Jasper National Park and headed a short distance to Mt. Robson Provincial Park. Mt. Robson is the highest peak in the Canadian Rockies. Unfortunately, it was partially obscured by clouds both the evening we arrived and the morning we left.

We stopped at the visitor center, where an extremely helpful lady explained camping options and nearby hikes. After learning that we were heading west, she also recommended a stop at The Ancient Forest. From a staff standpoint, it was definitely one of the better visitor centers we’ve stopped at.

Robson Meadows Campground is located across the highway from the visitor center. It is a forested campground with good site spacing and beautiful sites and appears very well maintained. My only complaint was that generator hours in the morning didn’t start until 9:00 am, which is pretty late if you want some morning coffee. We would have liked to stay longer, but we needed to move on.

Fifteen minutes west of the campground and visitor center is Rearguard Falls. The Falls is the farthest point that salmon migrate up the Fraser River to spawn, about 780 miles from the ocean. Only the hardiest salmon will reach this point. There were no salmon in June, but there is a nice walk to an observation area to view the falls from several angles. We enjoyed contemplating the lines through the class 5 falls. (Note that neither of us ever even considered running a class 5 rapid back when we kayaked whitewater, but it is still fun to read the water and imagine the run.)

There are over two miles of boardwalked trails that meander among the ancient cedars. Like walking among the huge redwoods or the monsterous sequoias, photos can’t capture the feelings of being surrounded by these large, old trees. In addition to the trees and rainforest, the trail leads to a waterfall and follows creeks. It was a beautiful walk, one I’d be happy to do again any time I was driving past.

Our next stop was Prince George, a good sized city with a Costco, supermarkets and a Walmart. We replenished our supplies and fueled up. By the time we finished shopping in Walmart, it was long past the animals’ dinner time, so we decided to just overnight in their parking lot and continue our journey in the morning. 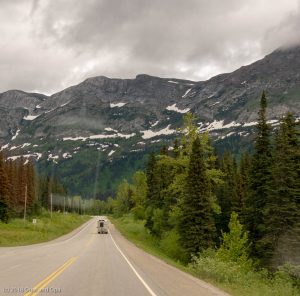 The next morning, while we still had internet, we made arrangements with new friends that we’d met on the Icefields Parkway to meet for dinner in Dawson Creek. Our route took us back across the Rocky Mountains, and while it was not as spectacular as the Icefields Parkway, it was still a very scenic and enjoyable drive. 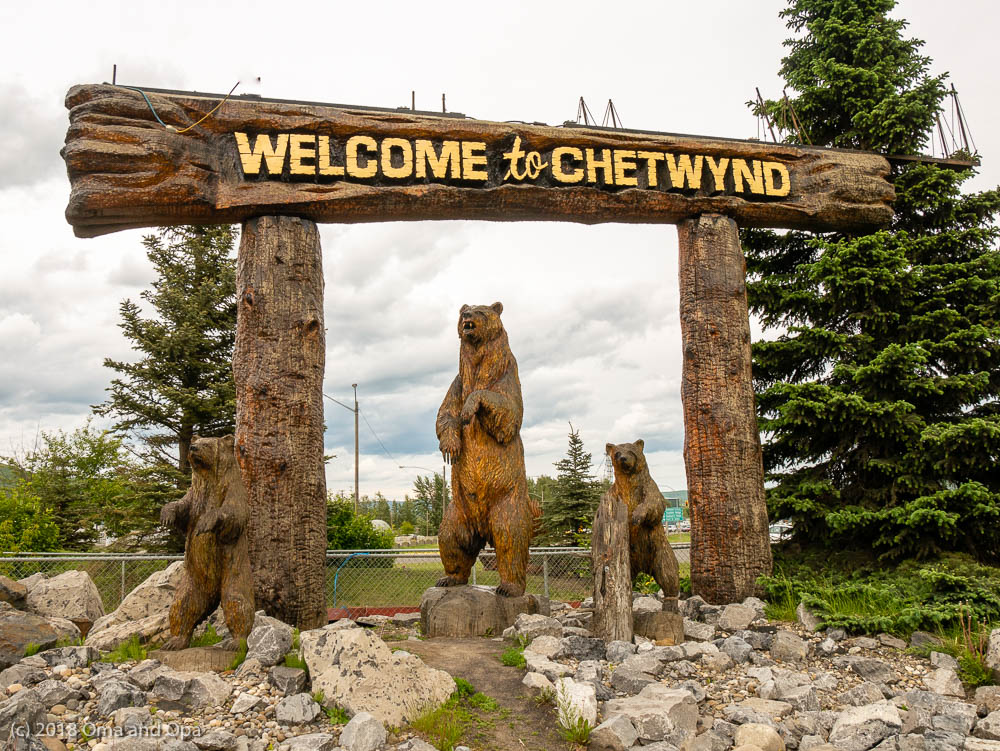 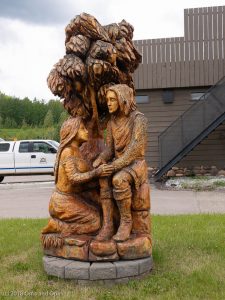 By mid-afternoon, we had reached Chetwynd (pop. 2,600), the only significant town between Prince George and Dawson Creek. Chetwynd describes itself as the “Chainsaw Sculpture Capitol of the World.” Unfortunately, our timing was just off. We rolled into town just as the annual Chetwynd International Chainsaw Carving Championship was wrapping up. Had we been coming through a day earlier, we would have stopped and watched the carvers for a while. Instead, we settled for photographing some of the many chainsaw carvings that are displayed throughout the town. Should we ever come by this way again in June, I’d defintely try to spend a day watching the event. 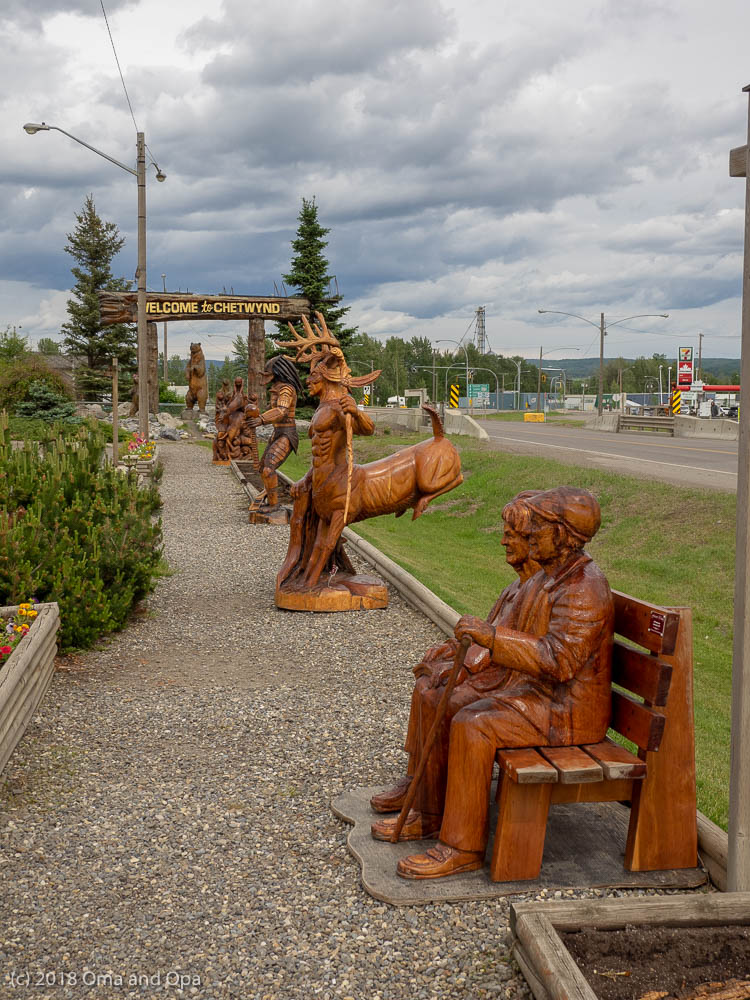 We rolled into Dawson City in late afternoon. After setting up and taking care of the animals, we had a great dinner out with our friends followed by dessert in our motorhome. They gave us more information about their favorite places along the route (they had done the trip in 2012 with a small caravan). They were moving on the next morning, so soon we called it a night and wished them well on their journey. 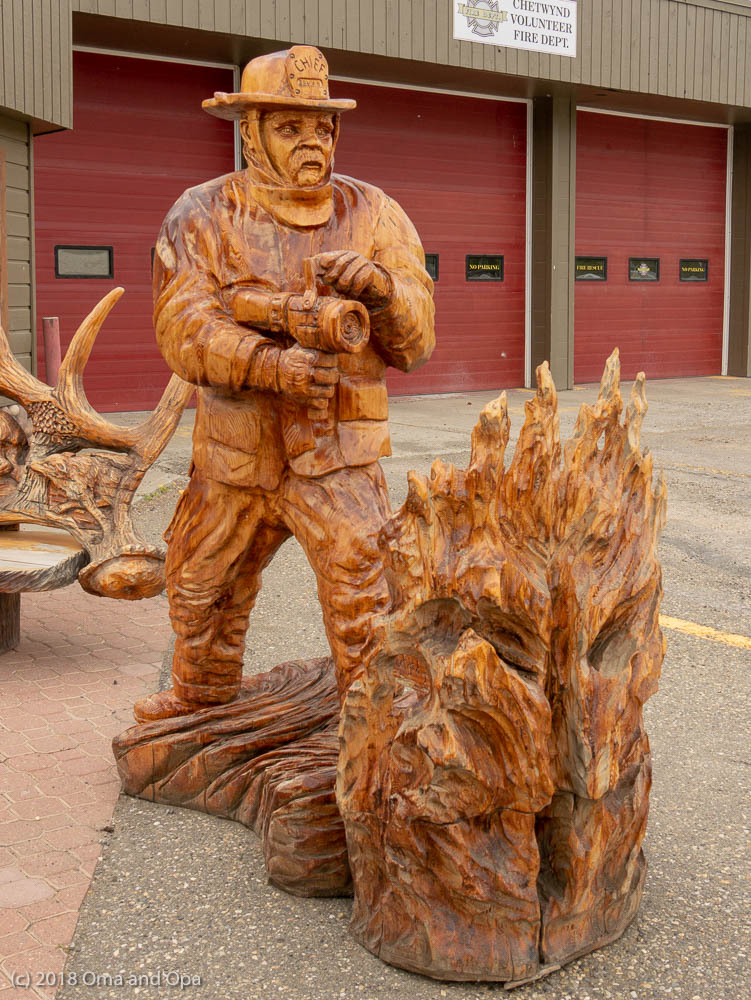 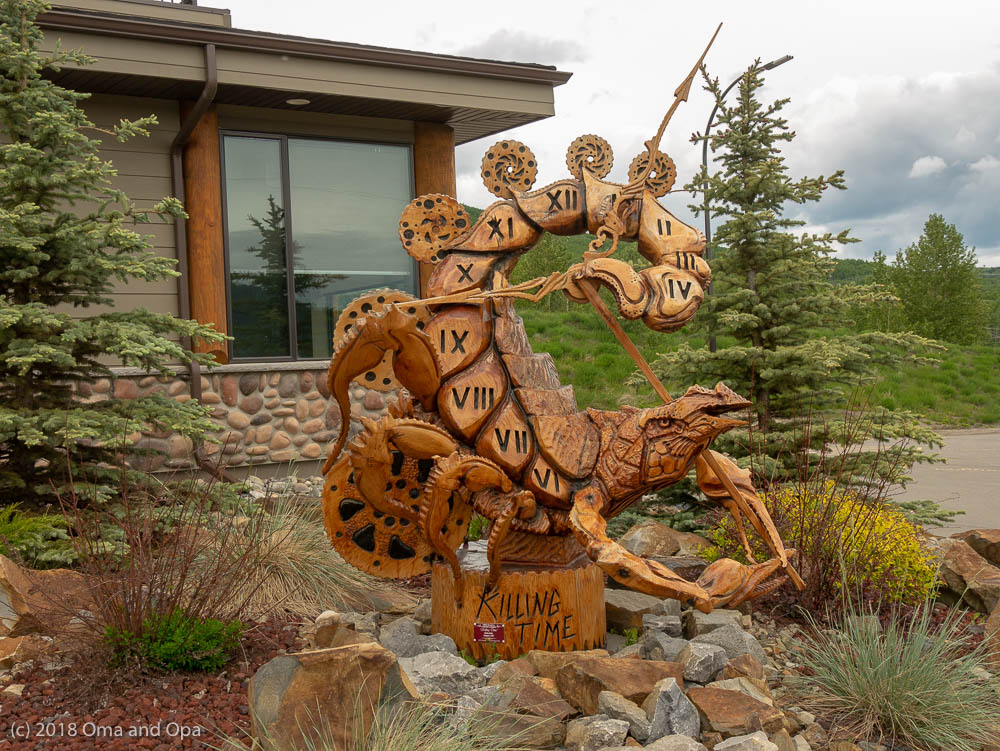 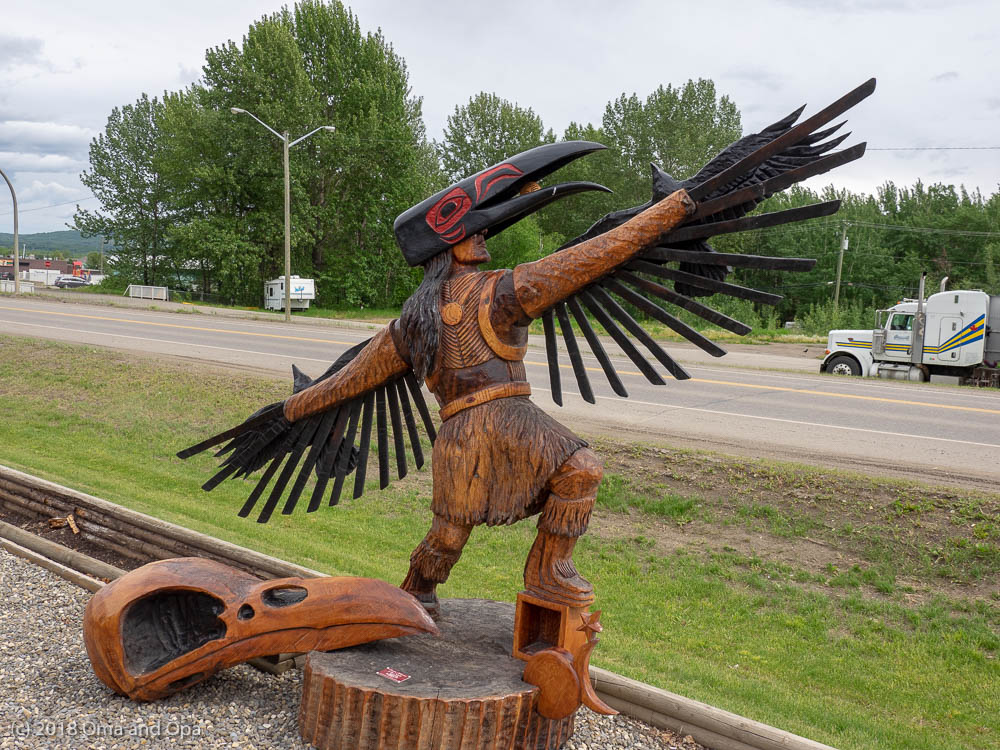 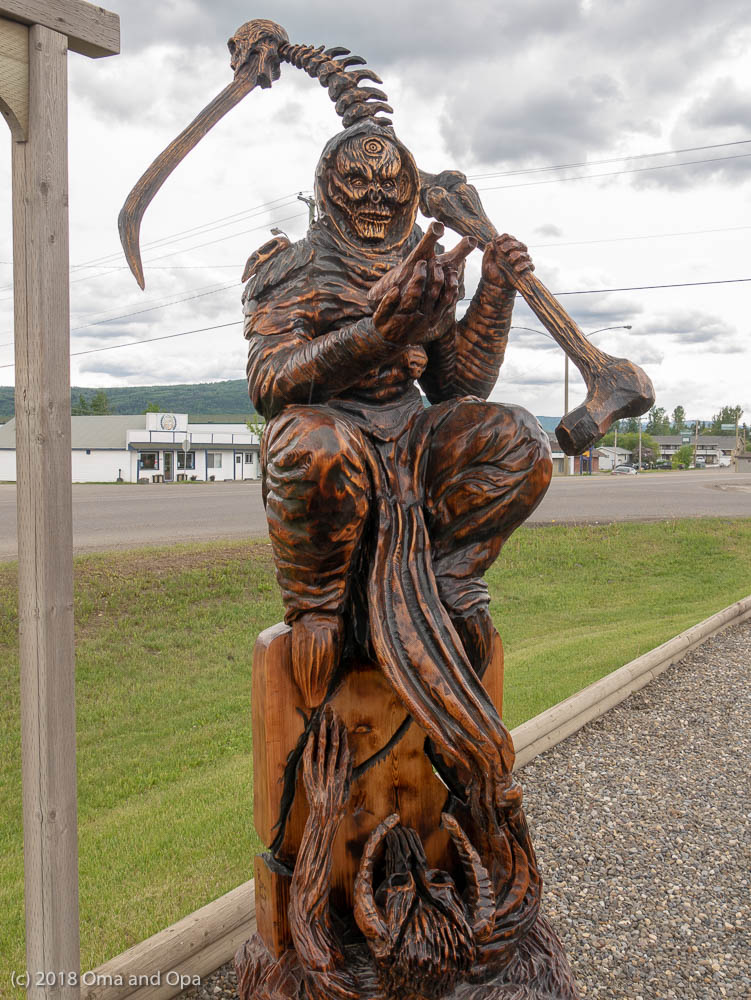 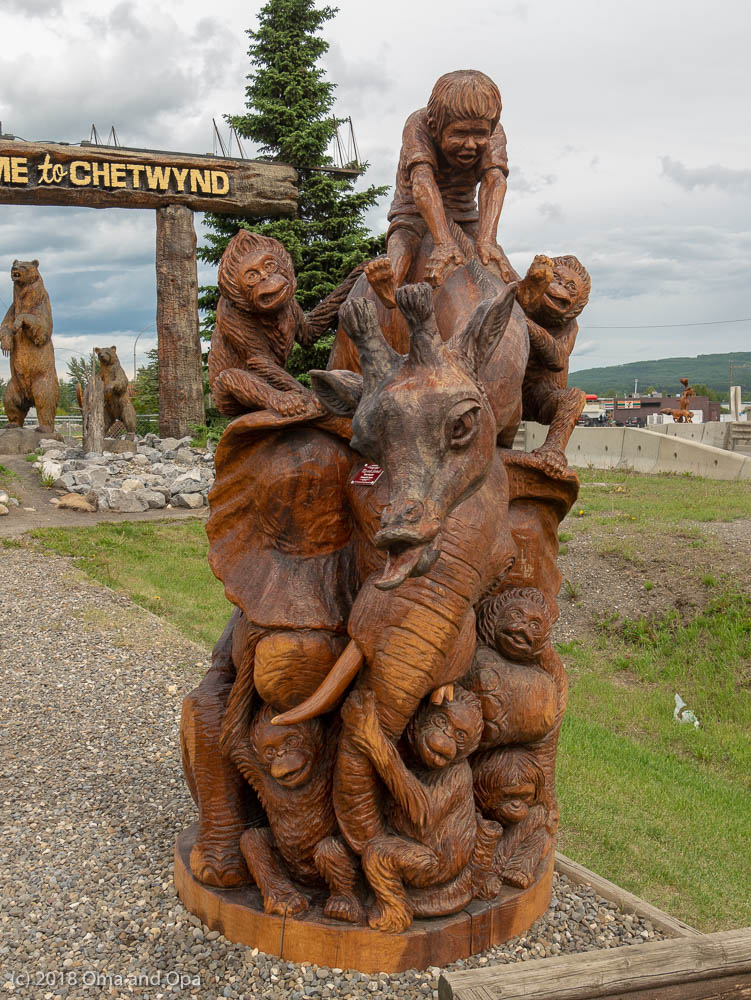