Warning: Parameter 2 to wp_hide_post_Public::query_posts_join() expected to be a reference, value given in /home/customer/www/annieandthebeast.com/public_html/wp-includes/class-wp-hook.php on line 287
 The Yucatan – minus Annie and the Beast – Annie & The Beast
Skip to content 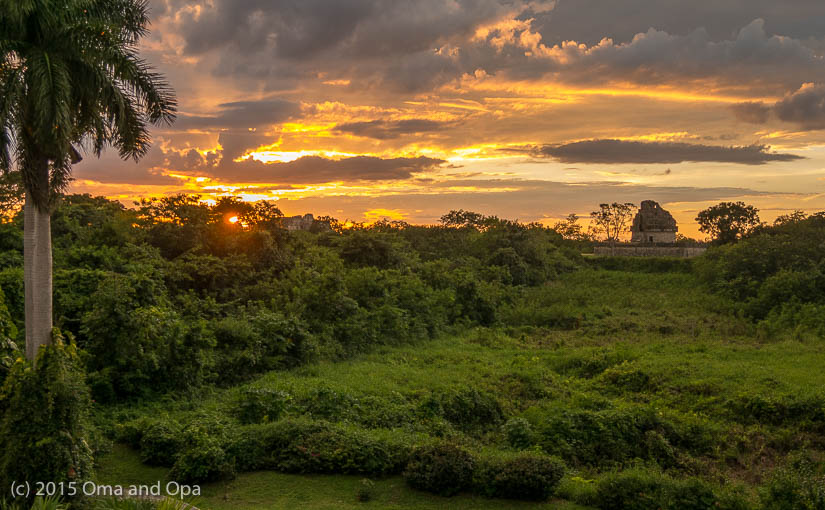 After the end of our first long trip in August, I was enticed back into the working world for a couple of months by my former employer. It was great to see everyone and do a little catching up. The short work assignment ended just before Thanksgiving.

With our next road trip not starting until the end of January, we looked at options to get someplace warmer for a week or two. Never having been to Mexico before and with early December having off-season prices, we decided to explore a bit of the Yucatan. Flights into Cancun were cheap (about $300), so the plan was to rent a car and check out a couple of cities, some more Maya ruins (we’d been to Tikal in Guatemala and a couple of sites in Belize) and finish up with some beach time before heading back for the Christmas holiday.

After arriving in Cancun, we picked up our rental car and headed to our first stop, Chichen Itza. Chichen Itza is a large Maya city from the Terminal Classic period. It has had a great deal of clearing done at the site, and is certainly one of the best-known Maya cities. Presumably because of its location near Cancun (about two hours away), it also receives a huge number of visitors. We stayed at the hotel adjacent to the park (Mayaland), which allowed us to enter the park shortly after it opened and before the hordes arrived by bus. We spent 4-5 hours there (most tourists spend less), and found it pretty quiet when we arrived. By the time we left there were endless rows of vendors lining the walkways and the tourists were there in force (although I’m sure it was still quiet relative to peak season).

We very much enjoyed our visit. This was our first visit to a Terminal Classic Maya city, and it was great to experience some of the differences and see some of the unique structures like the “observatory”. That said, I’m not sure I’d recommend doing a bus trip from Cancun and arriving in the heat of the day with thousands of other tourists.

Despite being “cool” according to the locals, by early afternoon we were ready to escape the heat and the crowds and return to our hotel for shade and a siesta. We spent the rest of the afternoon relaxing before moving on the next morning.

From Chichen Itza, we headed to Campeche. This is a formerly walled city on the Gulf. We found it pretty quiet with few tourists. There is a nice walkway in the city along the coast, and the colonial portion of the city is well-preserved. The walls have seven bastions that contain exhibits or contents of some kind, including a free city museum and a (small charge) museum with a variety of Maya stelae which we found very interesting.

Overall, while we normally like quiet, in the case of Compeche it was perhaps a bit too quiet. Of Compeche and Merida (the two larger cities we visited), we definitely enjoyed Merida more just because there was more going on.

Merida is the largest city in the Yucatan. Although tourist-friendly (especially near the city center), it has industry and (when we were there) the locals in the city center far outnumbered the tourists.

Our route (Chichen Itza to Campeche to Merida) was a little odd because we wanted to be in Merida on the weekend, when there are street vendors, dancing and just more going on in general. We arrived on Friday afternoon and left on Monday morning, giving us the entire weekend.

Besides checking out many of the standard tourist locations (Plaza Grande, Paseo de Montejo), we were entertained by a long public necking session while we ate dinner on Friday. On Saturday night we went to a local dance performance that turned out to be very disappointing. (Basically kids from a Compeche dance studio that were learning to dance – fine if they are your kids or grandkids, not so great otherwise.) However, there was great street food as well as interesting people watching. On Sunday, we finally found the dancing Oma was looking for in the town square, along with what were essentially pop-up restaurants, street food vendors, market stalls and some other entertainment.

While cities aren’t our favorite places, I enjoyed our taste of Merida, with its mix of real life and history.

From Merida, we headed to Uxmal. Uxmal is an important Late Classic Maya city and is generally well-preserved. Although there are a couple of hotels at Uxmal, we nearly had the Maya city to ourselves when we arrived early in the morning, and even when we left around noon it was not crowded.

There are a number of other Maya cities nearby, and Uxmal makes a great base to explore them. Our thoughts had been to hop in the car and do some more exploring after leaving Uxmal; however, Oma’s foot was hurting and the heat had wiped both of us out, so we chose to siesta and recover in the afternoon.

Hotel Uxmal deserves mention for the best service we received in Mexico. Although service in Mexico is generally very good (the staff depend on tips for most or all of their income), Hotel Uxmal went well beyond our expectations, providing very personalized service throughout our stay, several complimentary items and arranged to transport two shirts that I had left behind at another hotel. We had good service nearly everywhere, but Hotel Uxmal was the only place that consistantly exceeded our service expectations.

Our final destination was Tulum, where we had booked a room on the coast to relax and get some beach time. The fast route from Uxmal was to take the toll road back the way we came. However, the ATM at Uxmal was out of order and we did not have enough cash to cover the tolls. Although the hotel wasn’t enthusiastic about the idea, we took the back roads, which was a bit of an adventure. The GPS kept us from getting completely lost, but many of the small towns closer to Uxmal did not have an obvious main road through them, and our route was interesting. We definitely got to see a bit more of the Yucatan than many tourists. Eventually we made it to a main road, and from there the rest of the trip to the coast was uneventful.

Our hotel outside of Tulum was small and very pleasant. We were a little surprised at the narrow, busy (even in the off season) road used to get access to the hotels on the coast. We chilled the first couple of days. Dangerous surf kept us out of the water, but we did go into town a couple of times and checked out the Maya city (Tulum) on the coast just north of us. Oma was talking about the possibility of returning here for beach time in the future.

Unfortunately our last day and a half were spent dealing with a full-blown case of food poisoning from hotel hamburgers. It was a little crazy that after eating at lots of local places including a pop-up restraunt and street vendors, that hamburgers from our hotel did us in. We were in just good enough shape to make the two-hour drive back to Cancun to catch our flight home. We really enjoyed the first few days on the beach, but after our worst case of food poisoning in fifteen years, I’m thinking we won’t go back to this hotel.

Although we were a little cautious about what we ate (except, I guess, the hamburger at the hotel), we definitely enjoyed local food from the area, and we found the local restraunts to have much better food than the tourist places. That said, I think I enjoyed the simpler (and cheaper) food the best, perhaps because it was not wildly different than what we’re used to. (For example, tacos in the Yucatan were (fortunately) nothing like Taco Bell, but take marinated meat with some veggies, put it on or into a tortilla, and you’re well within my comfort zone.) One of our favorite meals was basically just three different taco-like items (technically only one was a taco, but all were stuff on a tortilla), which with a large fruit drink cost about $7 for both of us. The street food we ate was all good, and was apparently safer than the US-style food at the hotel.

We wanted someplace warm for a couple of weeks, and we definitely got that. We had good weather the entire trip, attractions were relatively uncrowded, and we enjoyed getting a taste of Mexico finally. All-in-all, it was a fun and educational get-away from early winter weather at home.