Warning: Parameter 2 to wp_hide_post_Public::query_posts_join() expected to be a reference, value given in /home/customer/www/annieandthebeast.com/public_html/wp-includes/class-wp-hook.php on line 307
 The Oregon Desert – Annie & The Beast
Skip to content

From Crater Lake, we are heading home. Our route initially is taking us more north than east (where I am hoping it is slightly cooler) before we head seriously east toward the Black Hills. Our first stop was in the Oregon desert, near the town of John Day.

The drive from Crater Lake to Mt. Vernon was slow but scenic. The last couple of hours in particular were through desert mountains with light traffic, up and down the mountains and twisting and turning along the roads. We took it slow and arrived at our oasis in the desert, Clyde Holliday State Park near the city of John Day in the early evening.

The campground does not take reservations, but there were still a couple of Annie-friendly sites available and we snagged one for three nights. The campground was a sea of green – they water the grass every day. Although this area is basically the middle of nowhere, three units of the John Day Fossil Beds National Monument are within striking distance.

The John Day Fossil Beds National Monument was primarily created to protect significant fossil beds that are in the region. Hundreds of well-preserved fossil sites are located in the various parts of the National Monument spanning about 40 million years, and there is a palenetology / visitor center within the boundaries as well. The visitor center was very nicely done; unfortunately, we couldn’t stay long as we had the dog and it was hot. Oma and I took turns taking a quick look while the other watched the dog. Hopefully we’ll make it back and be able to spend more time at the visitor center – there is a lot to see.

Our focus was not fossils (the fossil sites are not open to the public) but landforms. We took an afternoon trip to the Painted Hills unit and walked a couple of the short trails. The hills are well named, and the colors apparently come from different climate conditions that occurred over millions of years. It was a pretty spectacular area. There were a couple of other trails that we did not have time for, but we definitely enjoyed our visit. 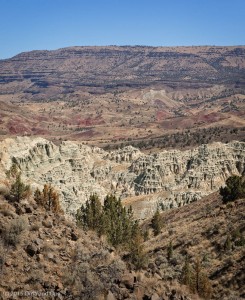 We also visited the Sheep Rock unit. This unit has the visitor center, as well as the Blue Basin trail. With highs near 100 degrees, we left our campsite early and (after a construction delay) made it to the trailhead shortly after 8:00 am. Coda came along again. The first part of the trail is pretty but not spectacular, as you basically climb 800′ up to the top of the basin from the outside. However, the overlook at the top is spectacular, and the trail back down works its way into the basin. This provided great views all the way down, but Oma was not thrilled – that view was due to the trail wandering down along the edge of the basin, and her fear of heights made for a slow, nervous descent.

Coda was pretty good going up, but started to get hot and impatient going down. Hot weather and hot sun are not his favorites, and despite getting water throughout the hike, he definitely got upset that we were slowly going down switchbacks instead of taking the direct route down. It was also amusing to see him plop down on the trail every time there was a little bit of shade to wait for us. He had clearly decided that he was ready to be done with this walk. However, despite that, his energy level stayed high and he always jumped right back up when we caught up with him and as we got closer to the truck and put him back on leash, he was still pulling all the way back to the truck.

After we recovered from the hike, we checked out the Kam Wah Chung museum in John Day. This is one of the things you stumble on occasionally in places you’d never expect. It turns out that in the mid-to-late 1800s, due to gold mining, John Day (current population about 1,700) had the second largest Chinatown in Oregon with about 2,000 Chinese residents. Eventually, most moved on, but two stayed. They had bought a store in 1885 where they lived and worked, and they stayed in John Day for basically the rest of their lives. One was a businessman, the other a traditional Chinese herbalist.

After they died, the building got locked up and more-or-less forgotten. In the 70s, they “rediscovered” it with store contents and herbs more-or-less intact, and it was eventually turned into a museum. You can only enter on a ranger-led tour, but there is also a visitor center with good exhibits. I found it fascinating and enlightening, and I certainly would not have expected to find this incredible Chinese-American history in a small desert town.