Warning: Parameter 2 to wp_hide_post_Public::query_posts_join() expected to be a reference, value given in /home/customer/www/annieandthebeast.com/public_html/wp-includes/class-wp-hook.php on line 308
 Spectacular Seward – July 2018 – Annie & The Beast
Skip to content

In Seward, we wanted to camp at the Seward waterfront campsites on Resurrection Bay. And we wanted one of the sites right on the waterfront preferably with utilities (water and electric), since it was supposed to be rainy and we expected to stay for a while. So that meant that we needed to get an early start and not dawdle around because they are first come, first served. By some unusual miracle, we were out of Portage Valley & RV campground by 8:00 am. 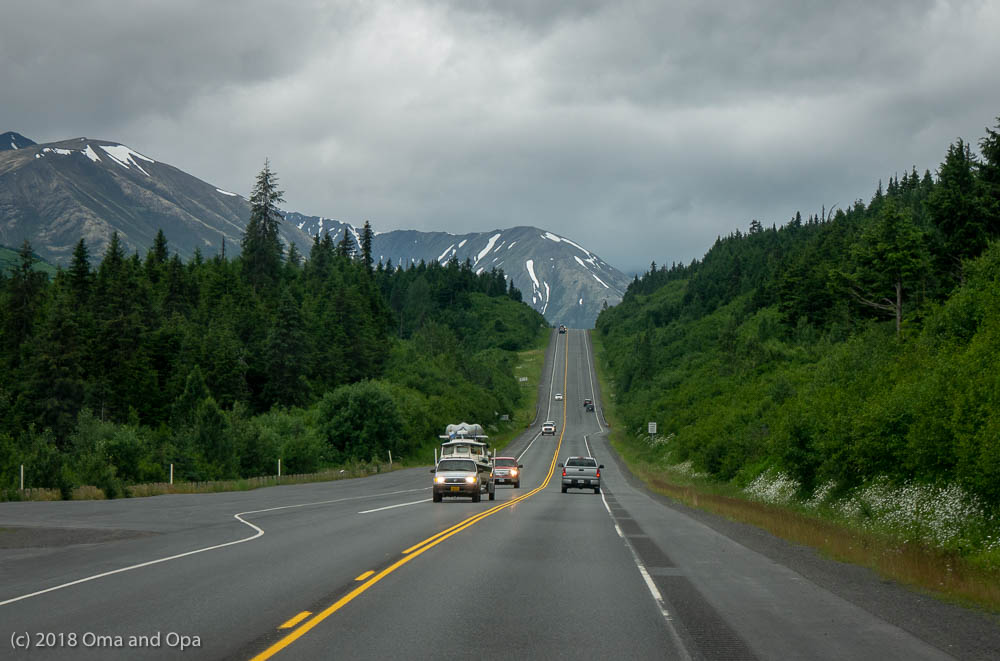 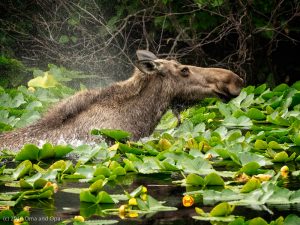 The drive again was beautiful. But before long we were away from the water and just in the mountains with rivers and little lakes along the way. Also very beautiful. And then we spotted a moose in one of the lakes as we were passing. We had to stop for that!  Thankfully there was a turnout nearby that even had a boardwalk along the lake. They must expect a lot of moose sightings there and a lot of traffic stops. We took advantage of that and watched the moose for well over 30 minutes as he was eating while crossing the lake.  I think that moose are magnificent animals and I enjoy every opportunity to view them. 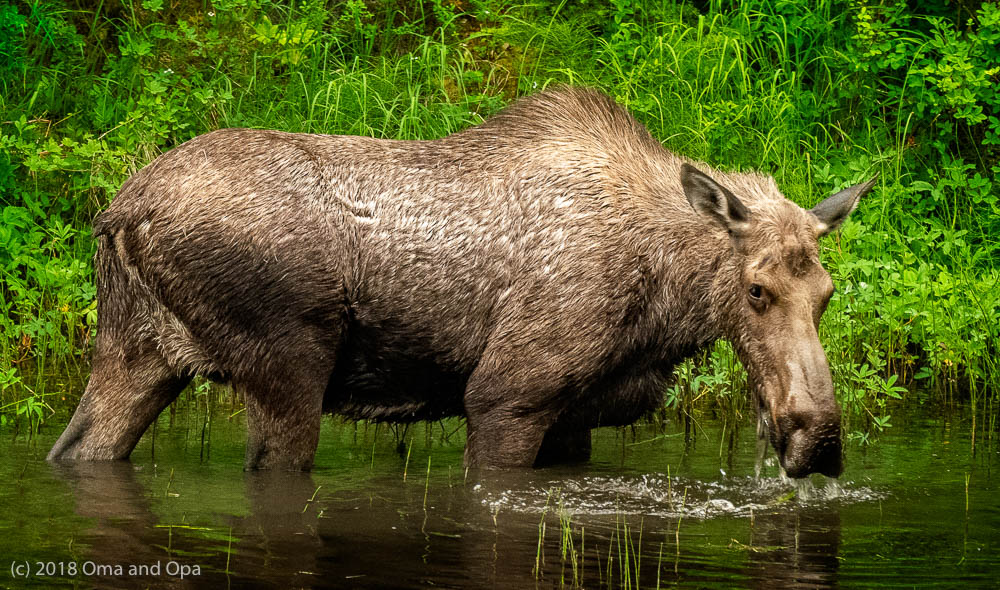 We arrived in Seward the Sunday 0f the weekend after the 4th of July activities. There is a lot going on during the 4th which includes the annual Mount Marathon Race. Many people come from near and far to participate in this very popular strenuous annual ritual. And the town is usually bursting at its seams. So that would have been fun to watch, but we would’ve had to get here two weeks earlier to get a place. Our timing forced us to come later.

Seward has a wonderful waterfront camping area. Seward was also affected by the 1964 earthquake and tsunami, and after the earthquake the original harbor and the land there was no longer usable. So the harbor was relocated and the city decided to create  a waterfront park where the old harbor was, which includes up to 4 tiers of rv sites overlooking Resurrection Bay. 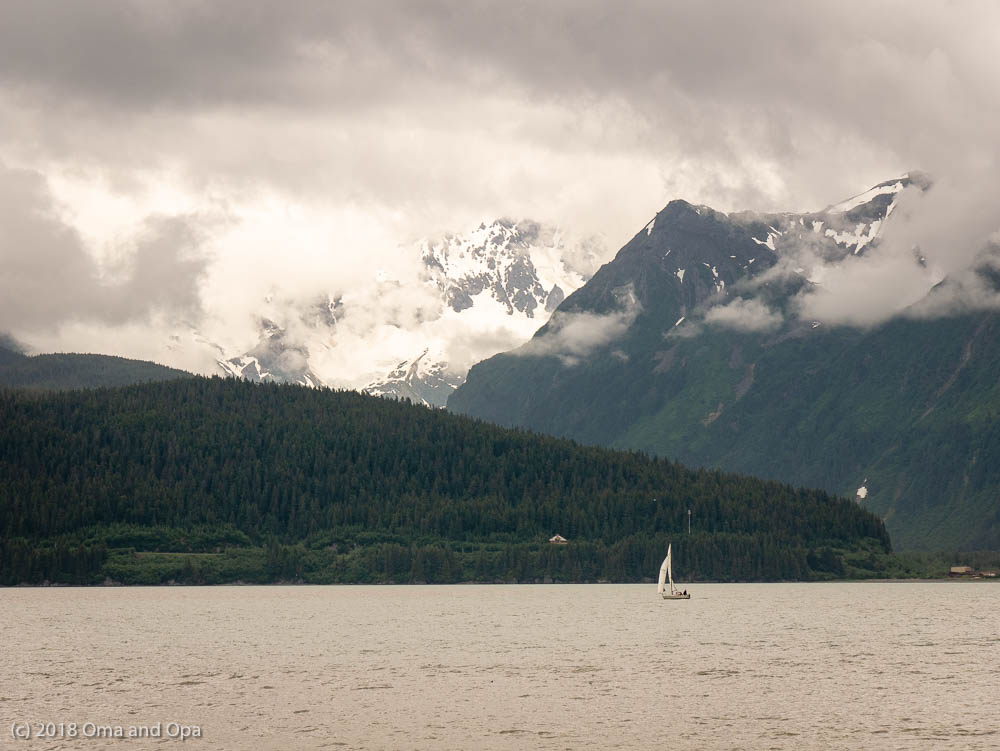 Some of the sites have utilities, but most are dry camping. Then there are also a few areas designated for tents. And there is a wonderful path along the waterfront for walking or biking, with some benches and a few picnic tables along the way for sitting and enjoying. The downtown area is behind the waterfront campsites and the harbor is at the end of the bay, all within walking distance.

If you choose to camp here and you want a front row water site, you need good luck. Campers have until noon to vacate and they leave at all different times.

But once someone leaves a front site, it is usually filled within moments. You can’t blink, it will be gone. Be prepared to leave something in the site, and get your tag and/or rv in there quickly. In fact, while we were preparing to leave, someone put an occupied site post in our site. They didn’t even ask if we were leaving or going out for the day. Lucky for them, we actually were leaving.

Seward is a beautiful town. There are gardens everywhere and benches set out to sit and enjoy.  There are several statues and monuments to remember its history. Throughout the town many buildings are decorated with beautiful murals. And everywhere you are surrounded by beautiful mountains!

There are fabulous restaurants in both areas as well as plenty of shopping opportunities. We visited The Alaskan Sealife Center which displays natural sea life  in the area with some hands on experience with some of the local marine life, such as anenomoes and starfish. There are large areas with a variety of the live birds of the area, sea otters and sea lions, and more. The Center also serves as a rehab area for injured wildlife. 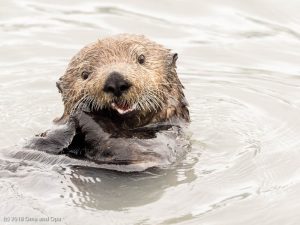 We enjoyed watching the sea otters from our campsite and down in the harbor. They showed up pretty much every day and provide lots of entertainment. You can often get very close at the docks when the otters swim under them. 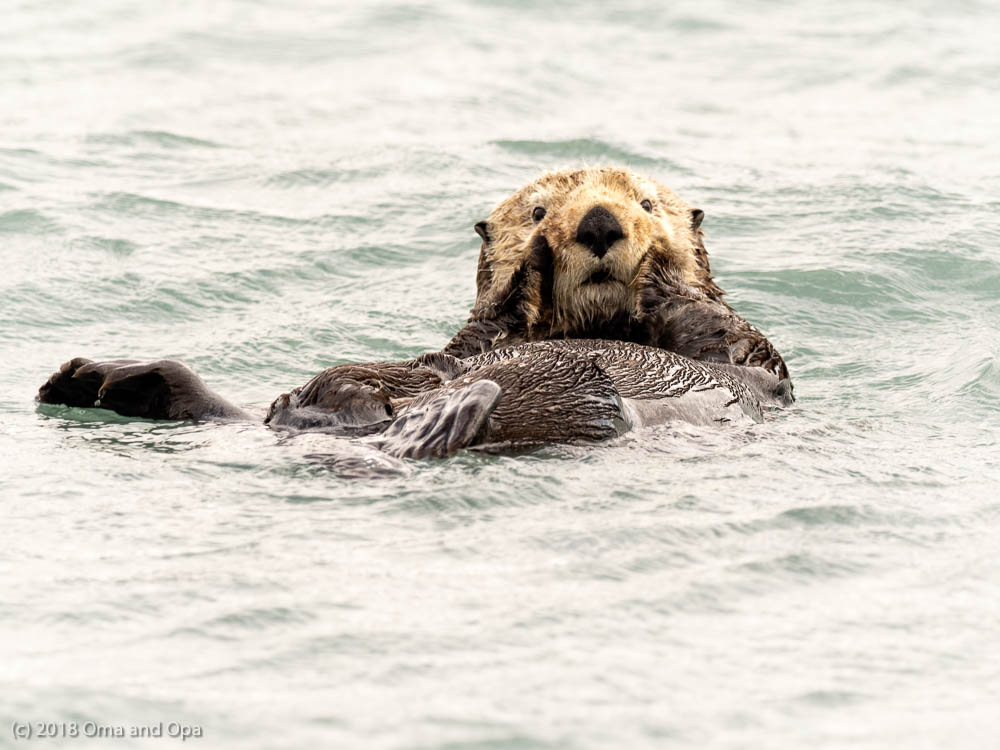 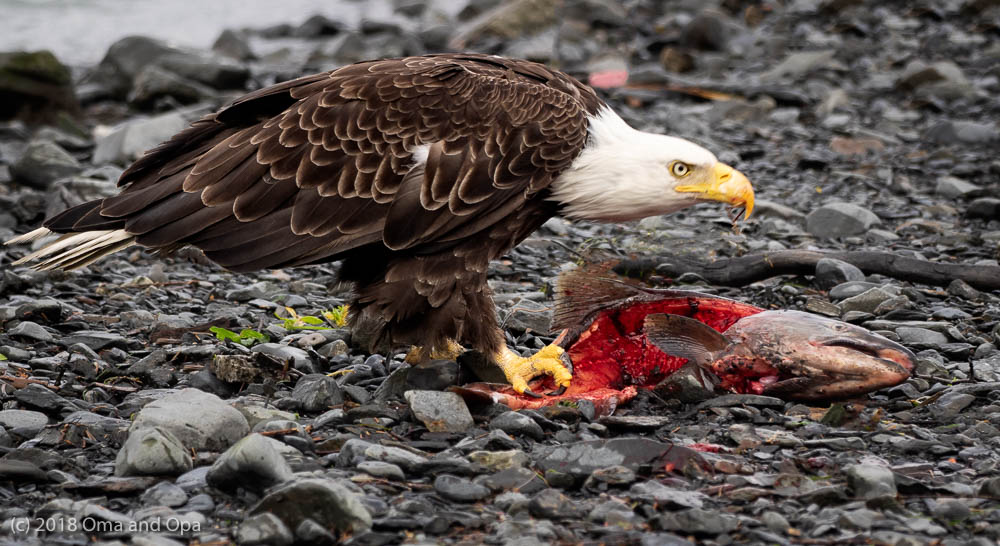 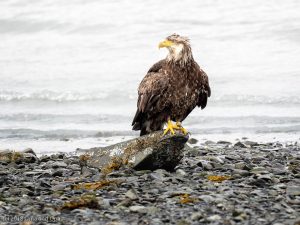 There also has been a family of eagles that we have been able to watch with the parents trying to teach the young ones how to fish and find food. One of the fishermen tossed them the carcass of their catch. One of the eagles got some of it, but the young eagles were intimidated by the many gulls, and the gulls got the majority of fish. 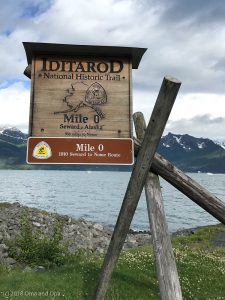 The waterfront trail is actually part of the original Iditarod Trail. Mile 0 of the Iditarod Trail begins in Seward. This marks the spot where the Seward-to-Nome sled dog trail began. When explorers and prospectors for gold came to this area in the early 20th century, they found that sled dogs were the easiest way to cross the landscape. The Iditarod Trail soon became the major “thoroughfare” through Alaska. Mail was carried across this trail, people used the trail to get from place to place and supplies were transported via the Iditarod Trail. 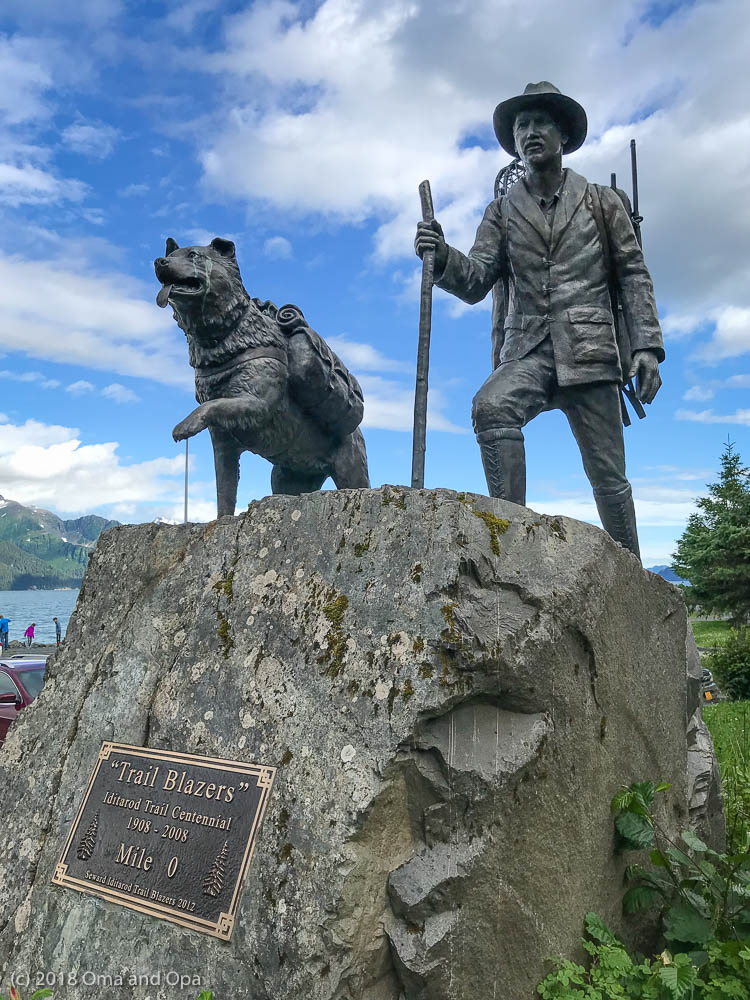 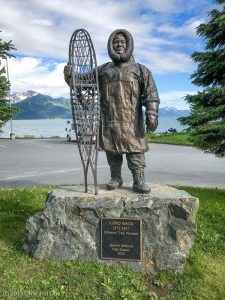 Then in 1925, the trail got its fame when it was used to deliver medication from Anchorage to Nome that could not otherwise reach the city where the residents infected with diphtheria were dying.  Only the dog sled team could get through to save the city in this modern time of air planes, trains, and ships.The first Iditarod race from Anchorage to Nome was in 1973. It was started to remember the historical importance of this trail.

We visited Seavey’s Ididaride Tours nearby.  Mitch Seavey is a three-time Iditarod Champion. We learned about the dogs and the race and got to ride a wheeled sled through the Alaskan wilderness. Then we got to see and play with the new pups. I fell in love!

One evening a group of RVing to Alaska 2018 members, a facebook group which we belong to, met at Thorn’s Showcase lounge for cocktails and appetizers. Part of this group were people that we met in Banff, and to my surprise, a former work colleague that we ran into at Dawson Creek and haven’t seen since retirement, and a new friend that was camped next to us. It was a real good time. The White Russians and Bucket of Butts (halibut cheeks that is) certainly helped to make a jovial atmosphere.

Another day, the friends that we had met in Banff whose daughter lives here picked us up and took us along to explore the area immediately around Seward. We checked out the beautiful spots nearby, campgrounds near the city and up the highway for twenty miles, before having a good burger in Moose Pass. It was a wonderful tour. 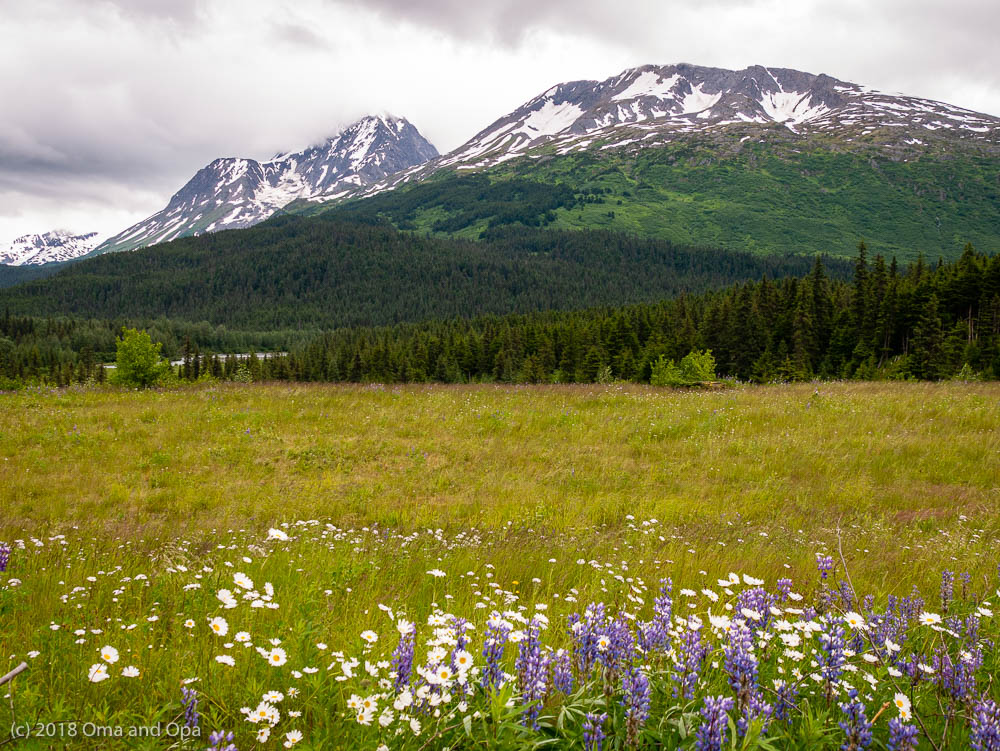 We stayed in Seward for 10 beautiful days. Most days were at least somewhat cloudy. It rained real hard for the first few days. And we had some wonderful days with lots of sunshine. We never needed the air conditioner but often turned on the heat in the morning. There is a lot to do here if you need to stay busy. But it is also wonderful to just sit back along the waterfront and chill. 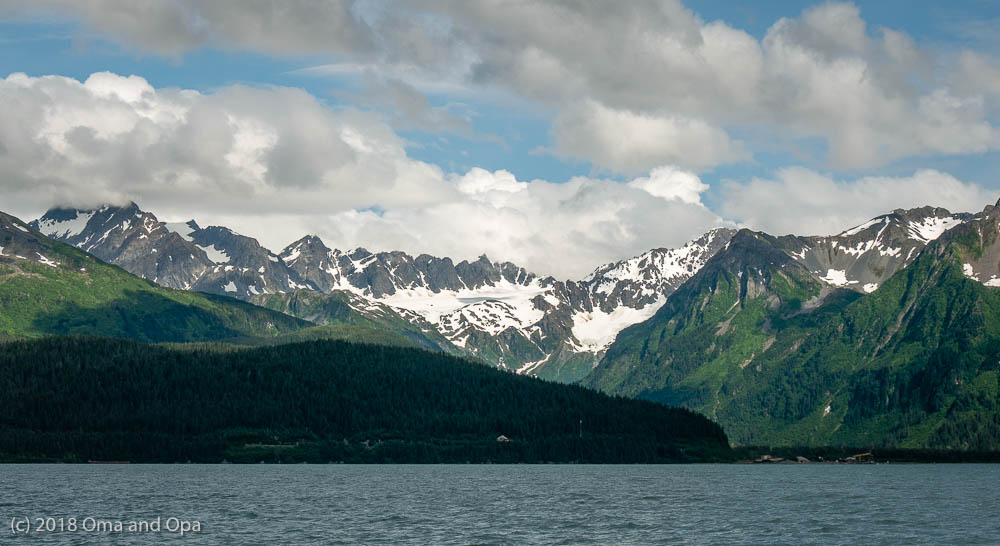 Miles: 0
Overnight: Resurrection Campground
Weather: Rainy, sunny and everything in between (48-60)