Warning: Parameter 2 to wp_hide_post_Public::query_posts_join() expected to be a reference, value given in /home/customer/www/annieandthebeast.com/public_html/wp-includes/class-wp-hook.php on line 308
 Rediscovering Deming – January 2018 – Annie & The Beast
Skip to content

We spent some time in Deming two years ago after we had a rather disturbing accident with our 5th wheel at City of Rocks SP, which is just north of Deming. So we spent the remainder of our time there at the Ford dealer, an rv repair shop and with an insurance agent. Not so much fun. But we did spend some days at City of Rocks which would have been very enjoyable had we not had the incident, and then a couple more days at the Dreamcatcher Escapee RV park to recombobulate.

So this year as we left Fort Davis, and decided to cancel our trip to White Sands NP for now, we decided to explore the Deming area a little more before heading to Tucson.

We stayed again at the Dreamcatcher Escapee RV park as a base and a place to do laundry and catch up with everyday tasks. The park is very friendly and helpful and is an inexpensive place to stay. There are good restaurants and decent grocery stores nearby. Full hook ups and easy in and out. And Deming has a lovely museum that covers many varied topics with many private collections, all for a free entrance. 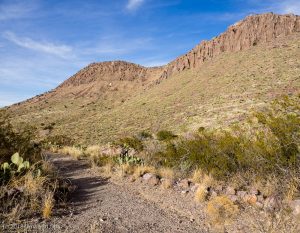 From here it was a short drive to Rockhound SP. It claims to have beautiful geodes and allows you to collect geodes or any other rocks for your own collection. Being the rock lover that I am, I had to go and collect some. We drove to the trailhead and climbed up the trail to where the volunteer told us was the best place for geodes. 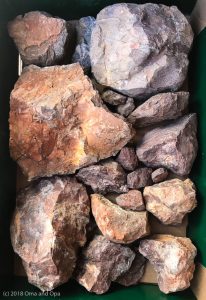 I searched and collected rocks but didn’t find any geodes. But the other rocks were very attractive to me also, so I filled my many pockets and a grocery bag full and insisted on carrying them down the hill. Well, my partner (Opa) intervened and helped me because he was afraid that I may hurt myself carrying all the extra weight. He is so good to me. 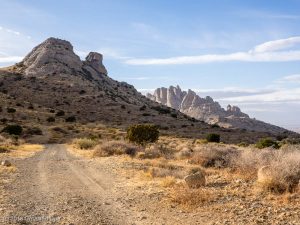 I was sad that I did not find geodes but content with my rocks and so we left to explore the Springs Canyon area. We only had time for the ride in and took a few pictures before they were going to close the gate. But what a picturesque area it was. On our drive back out of the park and down the road, there was a small shack that housed an interesting and somewhat peculiar rockhound and the many beautiful rocks that he had collected and prepared to museum quality finishes. His geodes were exquisite and he sold them for lots of money. But oh how beautiful they were! Outside, he had many discards for $4 a pound. I found a pile of cut geodes that just needed some loving polishing. I picked out three for me to take home and polish and love. What an interesting place and an amazing find for me!

Deming is not far from the US / Mexican border. I had had so much fun with my last trip at Big Bend NP that I wanted to do it again. Apparently, many people also go to this spot to get dentistry work, eyeglasses, and prescriptions and a much cheaper price than in the US. We parked the car in a nice large parking spot near the US immigration and customs building and walked across the bridge to the Mexican immigration and customs building.

Since I didn’t want to carry my purse that day, I carried our passports, a credit card, a little cash, and those visas we didn’t turn in at Boquillas, Mexico (in case for some reason they showed up on the computer or something) in a plastic baggie. We got to the counter much quicker than I had anticipated. I thought that I would have already pulled out just the passports and put the rest back into my pocket. But I didn’t. And the Mexican agent saw the visas and asked for them. I showed it to him and explained our circumstances. His response was that we had no proof that we had left Mexico (even though it was obvious that I just came from the US side) and that we had overstayed our visa permit time and had to pay a fine. After much discussion, he verbally agreed to let us go to get lunch and shop and said he would not fine us today. But later, Opa noticed that he did not stamp our new entry. Now we have no proof that we ever left. That spoiled the remainder of our time because we thought we would have to pass another Mexican immigration/customs office to leave.

We had our lunch and did a little shopping but were a little nervous the whole time. And as we were leaving, I noticed that there was no Mexican office on the right side of the road, so we just kept walking right up to the US office where we were asked a few simple questions and returned back onto US soil. Whew! Opa said that the Mexican officer was just trying really hard to scam some money off of us and that we probably had no real problems. Except that corruption is real. And if he hadn’t seen the visas, there probably would not have been any problem. Lesson learned.

We had intended to visit Pancho Villa SP, which was very near that border crossing, but we had expended a lot of energy on being nervous on the other side of the border, so we just headed back to our rv. I needed a few more drinks that afternoon.

Another day, we headed out to see the Gila Cliff Dwellings north of Deming. We had to drive past City of Rocks SP. We read on some reviews that it took people two hours to drive from Silver City which is 45 miles away, and Silver City is about an hour north of Deming. But we didn’t believe it. To our amazement, the ride up WAS nearly that long. The roads are very twisty turny and narrow. But, it was worth it to me. 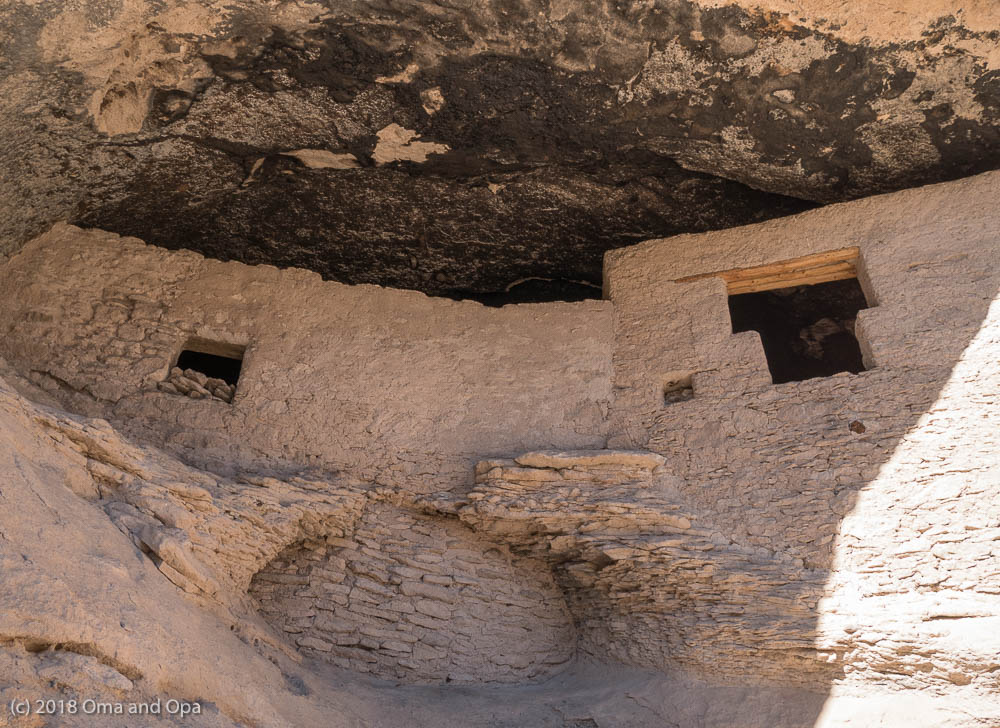 The Gila Cliff Dwellings contain some of the remains of the Mogollon culture as they built their homes high above the valley in the cliffs. I am always amazed at how these ancient cultures made beautiful, well protected homes in rock cliffs. I loved the hike to the dwellings and the dwellings were very interesting. But the intense drive made for quite a long day. 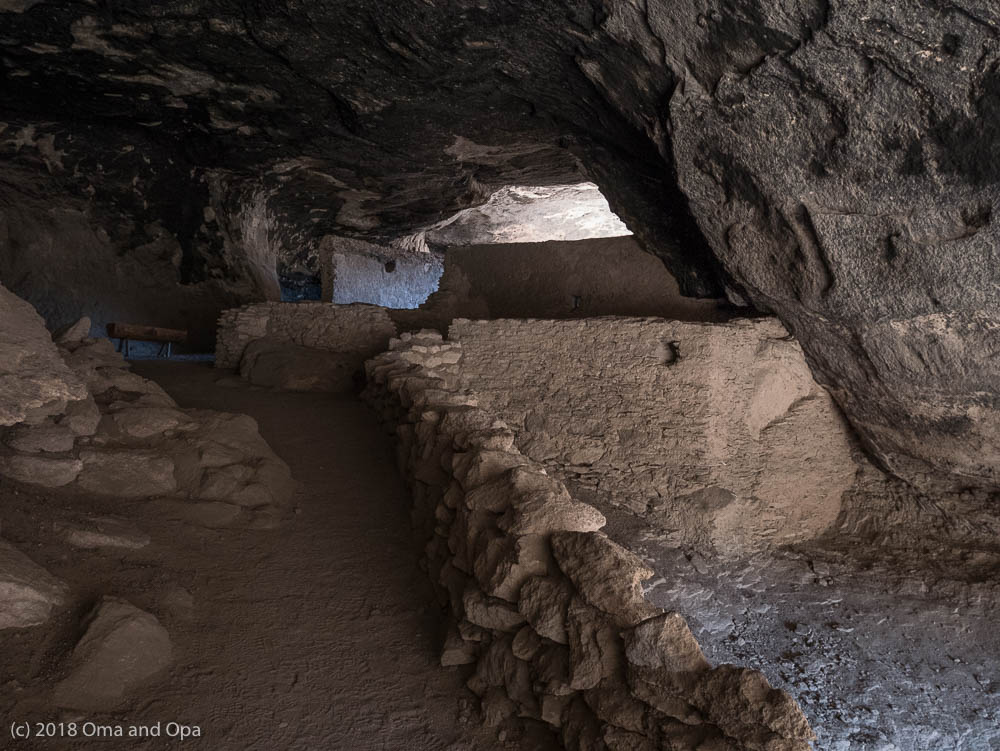 I was surprised at how much there was to do around Deming, New Mexico, and we actually missed a few things. I think it’s a great stopping point, and I really enjoyed exploring a little more of it.