Warning: Parameter 2 to wp_hide_post_Public::query_posts_join() expected to be a reference, value given in /home/customer/www/annieandthebeast.com/public_html/wp-includes/class-wp-hook.php on line 307
 Portugal – 2003 – Annie & The Beast
Skip to content 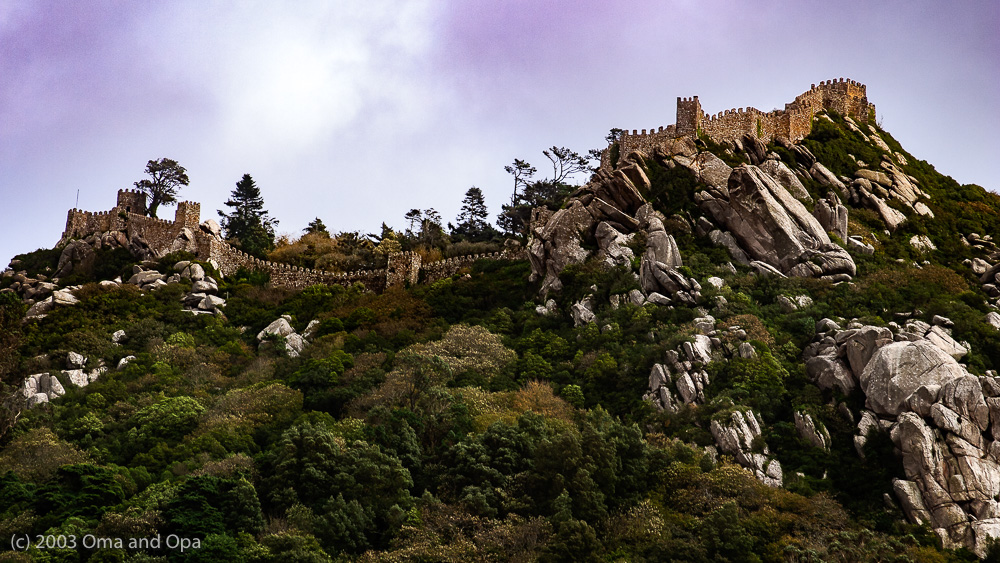 This is a blast from the past, which we’re posting since we can’t travel at the moment. I reprocessed the pictures we took from this trip with modern tools (primarily the latest version of Lightroom, with a little Photoshop or plug-in help as needed).

In late October 2003, we took advantage of a few days that Oma had off, cashed in some frequent flyer miles, and headed off to Portugal for a long weekend. (This was actually the second time we did a long international weekend – the year before, we got cheap tickets to London and did some sightseeing and saw a couple of shows. But I haven’t tackled digitizing our film yet, so that trip will wait.)

We flew into Lisbon, but went immediately to the ocean. Oma loves the water, so we had booked two nights (one full day) at an old fort that was turned into what is now the Hotel Fortaleza do Guincho. This was right on the rugged west coast of Portugal.

It was a beautiful location, close to Cabo da Roca, the western-most point of continental Europe, and Parque Natural de Sintra-Cascais, a large national park. We explored a little of the park, although barely really scratched its surface. We seemed to pretty much have the park areas we visited to ourselves, although there were a few people at Cabo da Roca.

As an added bonus, our hotel also featured a Michelin starred restaurant where Oma had our most amusing restaurant experience. After getting her menu, she seemed very puzzled and said she couldn’t see the prices. That threw me, since I wasn’t having any difficulty finding them. I quickly figured out the problem – Oma, as the lady in this fine dining establishment, was simply not expected to worry about unimportant details like price, so her menu omitted them. We still laugh about that. Dinner was excellent and huge for fine dining, consisting of seven official courses and I believe four “unofficial” offerings (an extra starter, a palate cleanser, an assortment of petit fours and finally chocolates).

From the coast, we headed to Sintra. Sintra is a popular tourist town not too far from Lisbon. (Apparently it is an extremely popular day trip in the summer.) The official web site says, “Never try to drive in Sintra as the roads are narrow and there is no car parking.” Of course, Oma had insisted that we rent a car, and she practiced her patented concentric circle approach to navigation – I followed instructions and drove in ever smaller circles until we stumbled on our destination. (In fairness, I think we only circled twice, and we did find our hotel.) Fortunately, we were able to park near our hotel, helped by the fact that the end of October is definitely not tourist season. Sintra actually seemed even quieter than our hotel on the coast.

We had one full day in Sintra, so we spent several hours exploring the grounds of Quinta Regaleira of Sintra.

We also walked the walls of the Moors castle above town and wandered a bit through the town itself, where Oma did some shopping and bought a souvenir.

We were flying home from Lisbon on Monday morning, so we drove into Lisbon on Sunday and dropped the car off, then headed into the city to our hotel. As with the rest of the country, Lisbon seemed dead, although it probably would not have been as bad if we weren’t there on a major holy day, All Saints Day. Shops were all closed.

We wandered down to the Cais das Colunas along the Rio Tajo (the large inlet that Lisbon is located on), where we finally found some people out and about. We also had our second (on reflection) amusing restaurant incident of the trip at a random street restaurant Sunday night. After ordering our meals, the waiter (or maybe it was the owner – it was a small restaurant as empty as everything else) brought a basket of bread. When we got the bill, we found that we were charged per item that we ate from the basket. We chalked it up as a learning experience (and it was less than $1.00 per item, so it only cost us a few dollars). Interestingly, we have never experienced that policy since then, despite trips to other southern European countries, including Spain and Italy.

We loved our few days in Portugal and said that we wanted to go back someday for a much longer stay. Unfortunately, there are so many places to visit and only so much time and money to do it that we’ve never made it back. A longer return trip is still on our list … perhaps it will happen someday.

Skip this if your’re not into camera reminiscing.

It was interesting going back to our earliest digital photography days. For this trip, Oma was carrying a Minolta all-in-one with a nice 28-200mm (35mm full-frame equivalent) f/2.8-3.5 lens and a very noisy 2/3″ 5 megapixel sensor. (That camera was noisy at ISO 100 and at its maximum ISO 800 was a complete mess.) Still, it was fairly expensive and nearly state-of-the-art in its class.

I was carrying our first Canon camera, the 10D, Canon’s groundbreaking “affordable” (under $1500 for the body) 6 megapixel APS-C DSLR, with our first two Canon lenses, the 17-40mm (approximately 27-64mm full-frame equivalent) and the 28-135mm (45-216mm). This was before APS-C lenses existed (the first APS-C lenses arrived with the 20D), so the only option was to re-purpose full-frame lenses and cover the focal lengths you wanted as best that you could.

(We had a great Minolta film system, but by this time it was clear that after Minolta’s premature (and failed) entries into the DSLR market in the 90s that Minolta was not releasing a competitive DSLR anytime soon. And we were right – a couple of years later, Minolta gave their entire photography business to Sony.)

It was interesting to compare images taken with circa-2003 technology against today’s cameras. Ignoring megapixels (more megapixels are fine, but only critical for big crops or really large prints), the 10D images hold up reasonably well, although even our smaller sensors today (we shoot with micro-4/3 equipment now) have more dynamic range and are much better at higher ISOs. Pictures from the Minolta are definitely usable and appear above, although its smaller, noisy sensor suffers in comparison. At the time, film purists were still arguing that digital cameras would not replace film cameras, but I’ve always considered the 10D to be at least as good as ISO 100 film in image quality (and better than film at higher ISOs), and I’m glad we made the transition to digital when we did.