Warning: Parameter 2 to wp_hide_post_Public::query_posts_join() expected to be a reference, value given in /home/customer/www/annieandthebeast.com/public_html/wp-includes/class-wp-hook.php on line 308
 Organ Pipe National Monument (in our new motorhome) – February 2018 – Annie & The Beast
Skip to content

Organ Pipe National Monument had been on our list since our last visit to Arizona two years ago. (Last time, I decided to hang out in a Tucson hospital  when we had planned to be in Organ Pipe, so it didn’t happen.) The original plan had been to take the fifth-wheel. However, now that we had a brand new motorhome, we needed to do a shakedown trip in it so that we could find out if there were serious issues to be resolved before we drove it to Texas and ultimately home. So we transferred a week of stuff from the fifth-wheel into the motorhome.

Organ pipe cactus grows extensively in Mexico, but the only place with any concentration of organ pipe cactus in the USA is in the national monument, which was established in 1937. Organ Pipe also has lots of Saguaro and other varieties of cactus and desert flora. 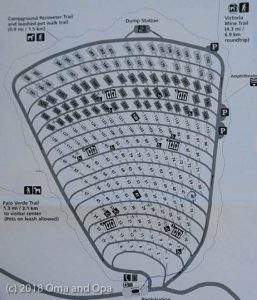 The campground is well organized and can accommodate rigs big and small. Pads are concrete, but most seem to have a modest slope. As with many national park/monument campgrounds, there are no hookups. There is a no-generator zone for RVs, and a tent zone beyond that. The campground is laid out in a fan or wedge arrangement, with the tent area located at the top (wide) portion of the fan. Spacing between sites is okay but not great; it is better than most RV parks but certainly not spacious. 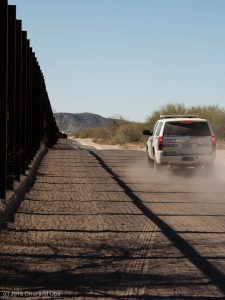 Organ Pipe became somewhat infamous when a ranger was killed by smugglers in 2002. Over the next decade, fencing, technology and additional border patrol agents were deployed around the monument, and in 2014 all areas of the park were reopened. There were no restrictions on access to the park during our visit, and no special cautions beyond common sense when we talked to rangers. We never felt unsafe anywhere that we were in the park, including at the border in daytime.

Ironically, Organ Pipe National Monument would have been better to visit with the truck and fifth-wheel than our new motorhome. The Ajo Mountain Road is recommended only for vehicles under 25′ and can be a little rough. We were discouraged from taking the motorhome on it, although I did consider it. But the road is one-way, so there is no turning back once you start. And I’m still tweaking my mirrors and have had little driving experience with it, so we decided not to risk trashing our brand new coach.

Happily, the park service offers a free van ride along the road twice a week. That would have been perfect. Unhappily, the van was already fully booked three days ahead of time. We did take a van ride out to the Blankenship Ranch. Ranching on public land in the park ended in the 1970s, but over 40 years later the difference between more protected lands near the campground and visitor center and grazed lands near some of the ranch buildings is stark. I would not be surprised if it took an additional 50-100 years for the desert to recover. The ranching history, buildings and area were quite interesting, and we’re glad we spent the several hours on the trip.

The other major loop in the park is the Puerto Blanco Drive. We did not do this (either with a park service van and definitely not with our RV). Most of the drive is recommended only for high-clearance vehicles, so passenger cars and motorhomes are out. (We talked to some people who did a portion of the drive in an NPS van, and they said the van bottomed out several times on their drive.) Although we could have done it in our truck, I’m not sure we would have. I think Oma got her fill of rough dirt roads in Big Bend; four hours (park estimate) of slow, rough road through the desert probably wouldn’t have sounded like fun even if we had the truck to do it with.

In addition to our afternoon van trip to the ranch, we did some hiking around the campground and visitor center, caught ranger programs that sounded interesting, and spent time getting used to the new motorhome.

Since we were not able to do the trip on Ajo Mountain Road, we moved on from Organ Pipe to the west side of Tucson, where friends of ours were staying. We met these friends two years ago at City of Rocks State Park in New Mexico. We had hit it off with them, kept in touch via social media, and met again last summer in Idaho as we were driving back home. And now we have another opportunity to meet up. We were able to get a site at the no-reservation Gilbert Ray county campground. It wasn’t full hookups, but we did get to spend a night with electricity and try out a few more systems on the motorhome. They drove over to see the motorhome and we had a great visit for a couple of hours. We were also able to have brunch with them at a local cafe the next morning on our way out. Can’t wait until our paths cross again!

From Tucson, we did some shopping on our way back to Eloy where our fifth-wheel was still parked. Then we transferred everything back to the fifth-wheel and parked the motorhome.