Warning: Parameter 2 to wp_hide_post_Public::query_posts_join() expected to be a reference, value given in /home/customer/www/annieandthebeast.com/public_html/wp-includes/class-wp-hook.php on line 292
 Meet Belle, our new Truck Camper – Annie & The Beast
Skip to content 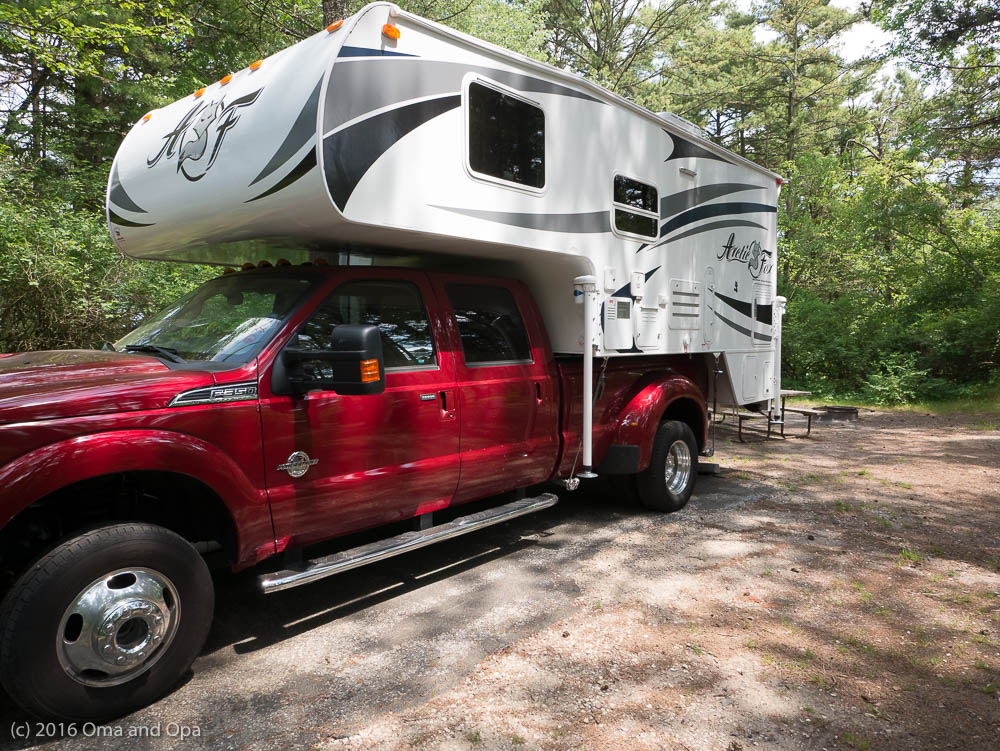 We picked up Belle in Michigan. The dealership did a nice job with the walk-through and fixed several minor issues before we took possession. They also made backing the truck under the camper seem doable, although the real test will come when we do it on our own.

Although Arctic Fox truck campers are pretty well-made (for an RV), it has been a bit jarring to be back to the standard RV stuff  – locks that don’t like keys, tank levels that might be accurate to the nearest 20 gallons, rv parts that are cheap, and so on. We’ve gotten spoiled with the Excel and were taking its higher-quality for granted.

After we picked Belle up, we overnighted near the dealership in case we discovered something major that we needed them to address. Nothing we found that night was big enough for us to bother taking it back in (and waiting around for someone to do a fix). Coda (our 90 lb. dog) isn’t thrilled with the truck camper (he thinks it’s too small), and eventually he retreated under the table. Our evening went well, we survived a storm without leaks (although the heavy rain was LOUD with the roof only a couple of feet above our bed), and we headed home first thing in the morning. On the drive home we were able to do what we could not do with the fifth-wheel: stop at McDonalds for coffee and at a restaurant for lunch.

While the overnight near the dealership was useful, we only had room in the truck to bring the bare necessities along when we picked Belle up. Oma found a nice campsite available a few days later at a state park on Lake Michigan, so we packed more typically (although still with a relatively light load of food and clothes), included the cat (much to his dismay), and we headed out on a more realistic shakedown trip.

The weather was a bit hot but otherwise beautiful. For the first time in years, we’re truly back to camping (for good and for bad). Backing into our site was a breeze with the truck camper, but would have been challenging with the fifth-wheel due to trees. With fewer windows and no comfy recliners in the truck camper, we spent far more time outside than we do in the fifth-wheel. We found a few items that we need to bring along next time, tried the shower (it’s cramped, but it works), and basically truly camped in (and around) the camper for a couple of days.

Our initial observations are that we have tons of storage, and are going to be limited much more by weight than storage compartments. Packing up seemed to go relatively fast, which is a good thing since we’ll be doing that nearly every day. Our tanks are plenty big, although with the standard crappy empty / 1/3 / 2/3 / full indicators, it’s hard to know how much water we really used and how full the grey and black tanks really were.

The cat settled in pretty well, which we expected. I don’t think he’ll have a problem with the truck camper as much as he’ll have a problem with traveling nearly every day. With the fifth-wheel, we travel and then usually park for a while, which suits the cat. With the truck camper, we’re probably going to travel some nearly every day, and since the camper is coming with us, so will the cat.

The dog is settling in, although he still thinks our (relatively large) truck camper is just way too small. I think he’ll be fine on days that we can hang outside (decent temps, no rain, tolerable bugs), but the dog really doesn’t like confined spaces, and as big as our truck camper is, it’s just not that big from the dog’s perspective. But he loves traveling and riding in the truck, so I think he’ll adjust.

Total length of our truck with camper bumper to bumper is 25′. The truck is 22′ by itself, so the camper only adds a yard or so, and we’re less than half of the length of the truck hitched to the fifth-wheel. We’re 12′ high (a bit lower than the fifth-wheel), so we still have to pay attention to the height of bridges and tree limbs. Although we won’t know for sure until we’re fully packed for a long trip, my calculations and an initial weigh suggests that we’re going to be close to our GVWR loaded and carrying a days of water in our tank. GAWRs look okay, although we’re going to have more margin on the front axel than the rear.

We put StableLoads (upper and lower) on the truck, and the truck seems to be handling relatively well. (Nothing we do, outside of getting a really, really big truck, can change the fact that we are carrying a large load with a high center of gravity.) The truck seems to lean a little to the passenger side with the camper, which isn’t very surprising since the slide-out is on the passenger side, and most campers are heavier on the side with the slide. Air bags on the truck could take care of that, so we’ll be making that decision before we leave.

So far we’ve only had relatively minor things that were problems: a screw came loose, the shower needed caulking, the adjustable shelves do not like to be adjusted (did I mention cheap components?), one of our exterior compartment doors seems to lack material on the bottom, our door stop fell off, the smoke alarm battery needed replaced a week after we got home, one exterior seal needed recaulking – things that we can either take care of ourselves or live with for a while. The only thing that has us annoyed at the dealership is that Arctic Fox programmed one of the jack controls wrong, so the “lower driver-side front jack” button lowers the rear jack, and vice versa. (Raising the jacks works properly, which makes it more confusing than if the front and rear were completely reversed.) We can work around it, but it is confusing and the dealership absolutely should have caught that as they used the jacks multiple times, including loading the camper onto our truck.

The final verdict won’t be in until we are well into our first long trip, but it looks like the truck camper is going to give us what we wanted. On any longer trip where the size of the fifth-wheel is not a consideration, we’re definitely going to be towing it – it’s night and day more comfortable. But when smaller size and mobility are more important, the truck camper should work great.