Warning: Parameter 2 to wp_hide_post_Public::query_posts_join() expected to be a reference, value given in /home/customer/www/annieandthebeast.com/public_html/wp-includes/class-wp-hook.php on line 308
 Jeeping about Sedona – February 2018 – Annie & The Beast
Skip to content

While we were in the area around Sedona, we wanted to do something that would give us an opportunity to have vantage points different from what we could get from the roads or short trails. Oma and I enjoy scenic trains (although not a serious railfan, I do have a thing for trains in general), and the Verde Canyon Railroad was nearby. But we’ve never done a serious off-road trail, and while our truck is 4wd, a very long wheelbase, 8′ of width, dually wheels on the rear and road tires make it a lousy vehicle for any serious off-roading. So if we wanted to get places off the main roads, we were going to have to go in someone else’s vehicle. 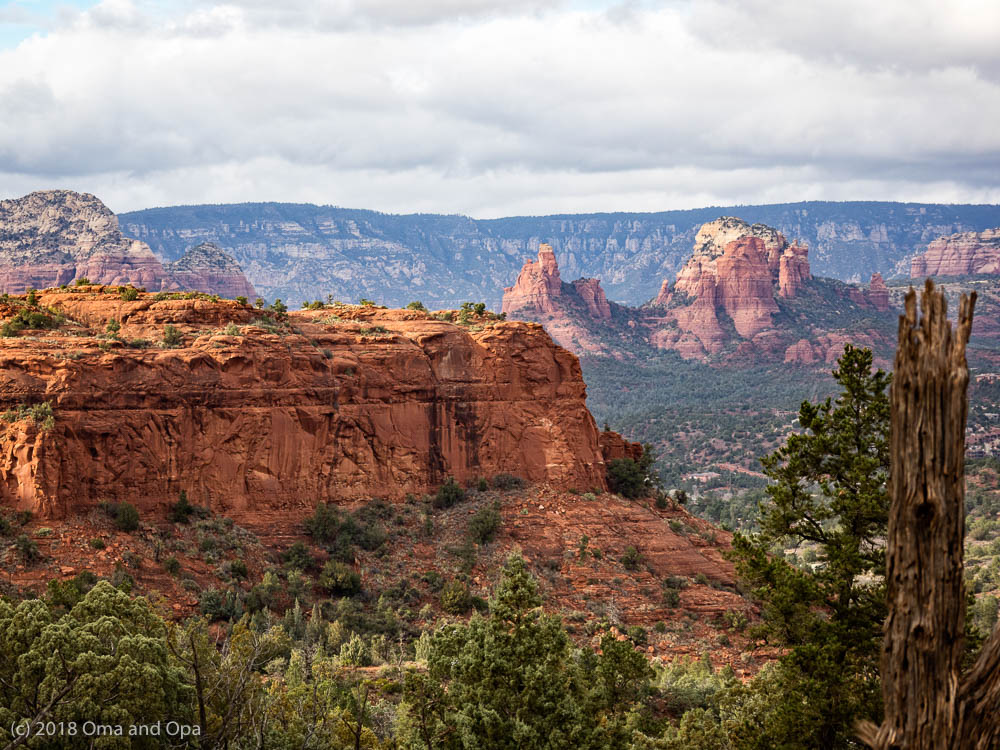 Sedona seemed like a perfect place to have a serious off-road experience, so we decided to skip the train this time and go for something a little bumpier and hair raising. There were numerous jeep companies in Sedona. We picked Pink Jeep Tours. They are the original Sedona Jeep Tour company (they claim to be the first jeep tour company in the US), and their most popular tour, the Broken Arrow tour, is exclusive to them. We chose the three-hour combination Scenic Rim / Broken Arrow tour to maximize what we’d get to see. 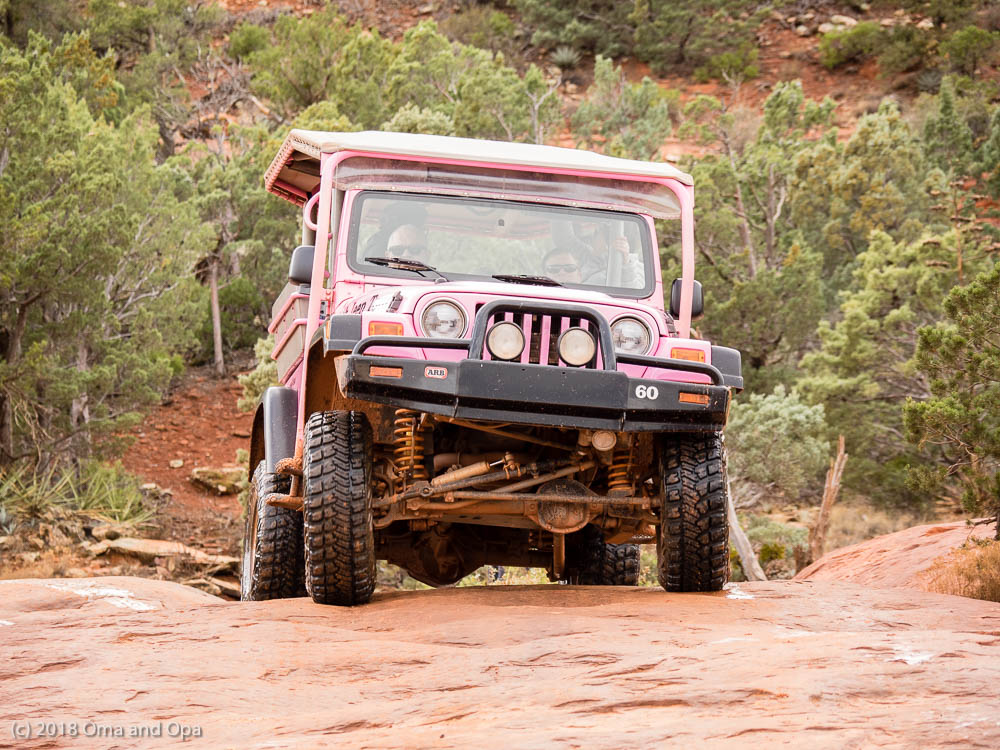 Pink Jeeps are heavily modified Jeep Wranglers. Wheels, suspension, axles, passenger compartment – these vehicles are designed for serious off-road driving, day after day. Our jeep had our driver, Oma and I in the back (Oma apparently wanted maximum bumpiness), a Canadian and an Australian. 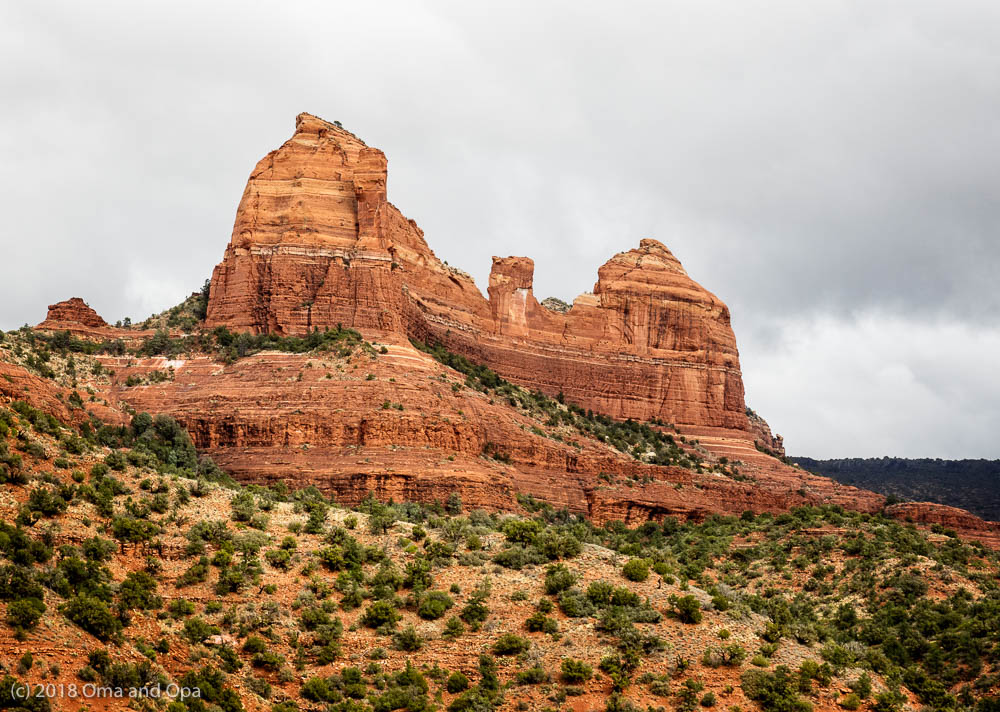 As the name suggests, we went on what was basically two separate trips in a three-hour period. We started off on Schnebly Hill Road. This was (is – kind of) a real road that started as the main road to Flagstaff many, many years ago. Eventually, alternate roads were built and this road became a forest road. Unfortunately, the Forest Service hasn’t had money to regrade the road in years, so now it is a tad … bumpy. Okay, seriously bumpy. It was not technical, but we did see a stock Jeep Wrangler break a spring less than a mile up the road. So we were very happy to be passengers in someone else’s vehicle and not driving our own. 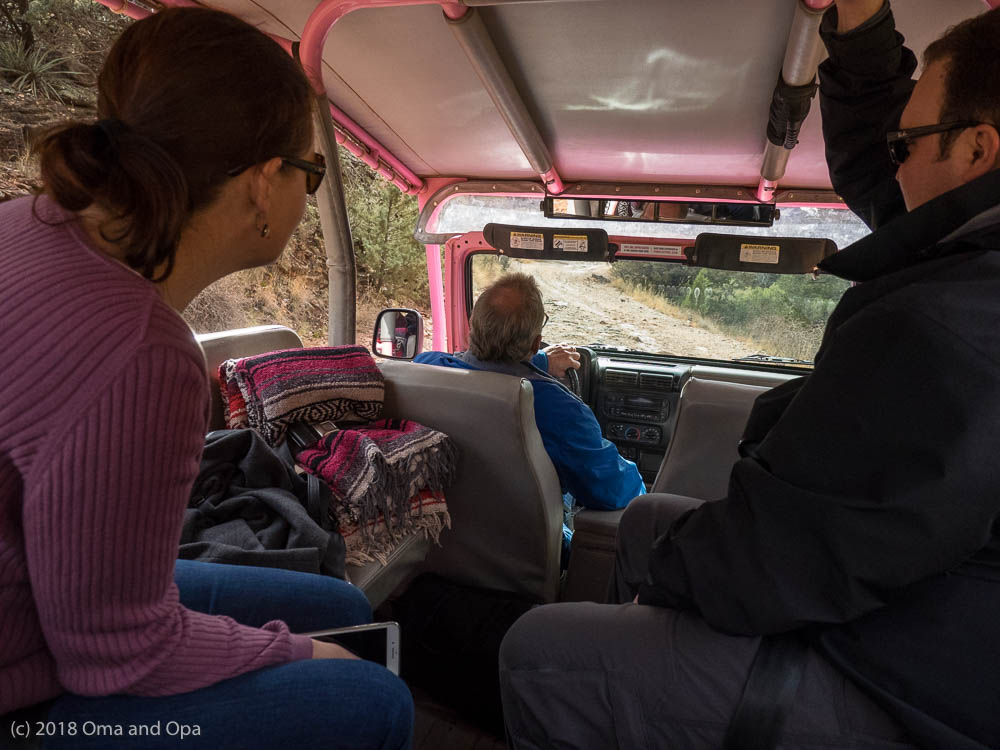 Trying to take pictures while the jeep was in motion was nearly impossible. It was just too bumpy. But our driver stopped from time to time when there was a particularly nice view, and we had a opportunity to get out and take pictures as well. While my body couldn’t have handled 20 miles of that road, it would have been interesting to drive much further if we’d had all day. There were plenty of views of the red rocks, even if it wasn’t perfect for pictures with mostly cloudy skies. 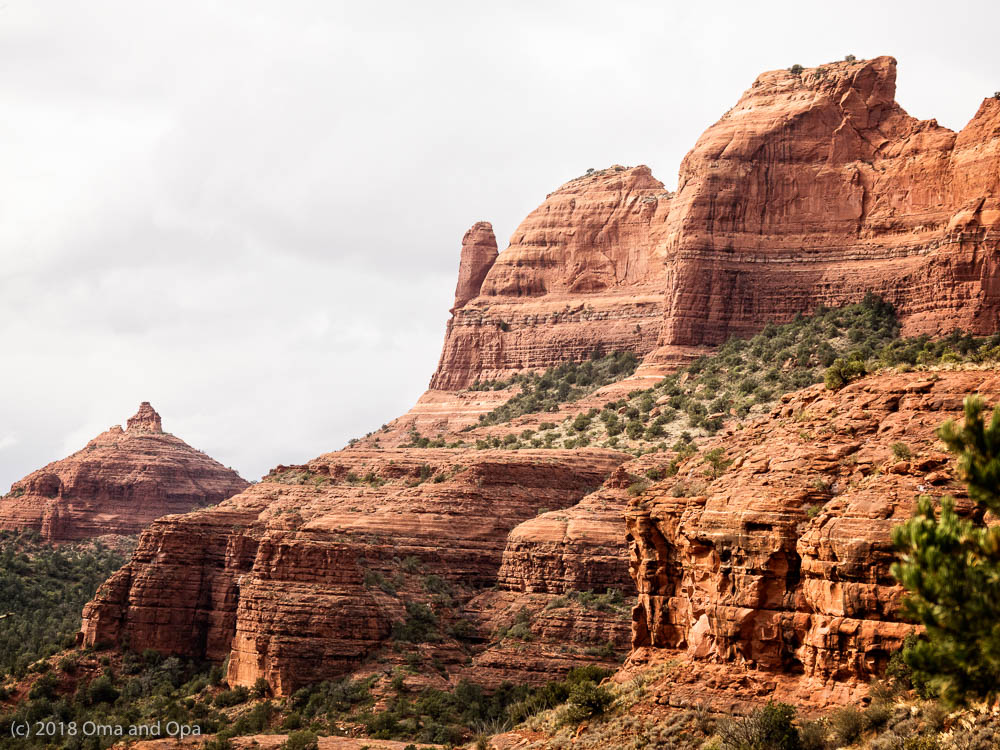 After wandering up the road for several miles, we eventually turned around and returned to Sedona for a bathroom break before tackling part two of our trip, the Broken Arrow trail. This trail is open to hikers (we saw a few close to the start), bikers (saw none), people driving dedicated 4×4 vehicles (not street vehicles) and Pink Jeep Tours. This is THE Pink Jeep Tour. Pink Jeep apparently spends about $1,000,000 maintaining the trail. It starts off with an obstacle to discourage vehicles that shouldn’t go further, then turns into rough trail. I lost the “trail” when they started driving on the red rock. 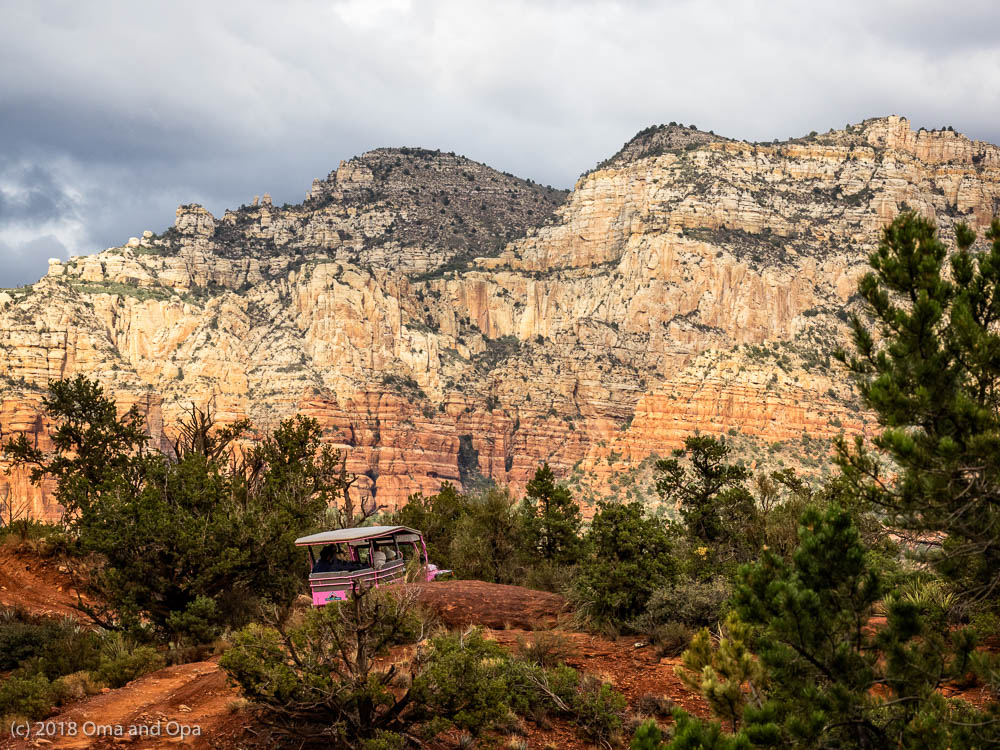 It actually wasn’t quite as bumpy as the Scenic Rim tour (Schnebly Hill Road), but it was much more technical. 45 degree descents. Circling around Chicken Rock, called that because you’ve got a boulder on one side of the jeep and a big drop-off on the other and if the driver doesn’t make his turn, you’re going over the cliff. Driving from boulder to boulder. It was clearly geared for people who needed a little excitement in their lives. Oma loved it. 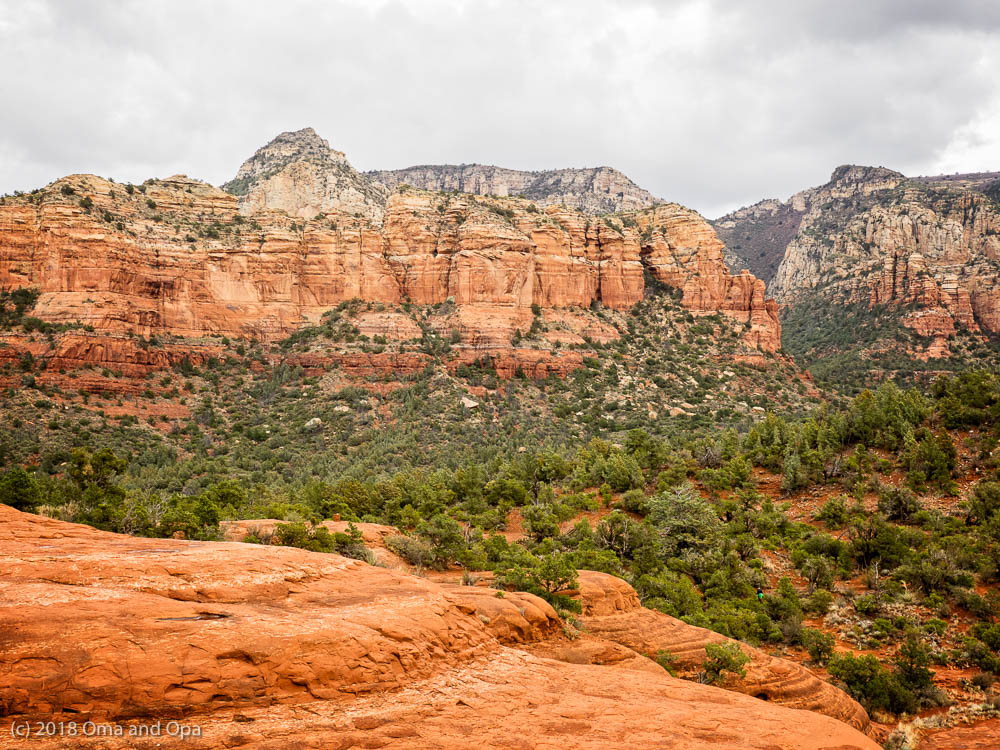 Beyond the excitement, they also stopped at several broad overlooks where we were able to get out and enjoy the spectacular views. And they were really spectacular. We definitely got access to places that we simply would not have been to without taking a jeep tour. 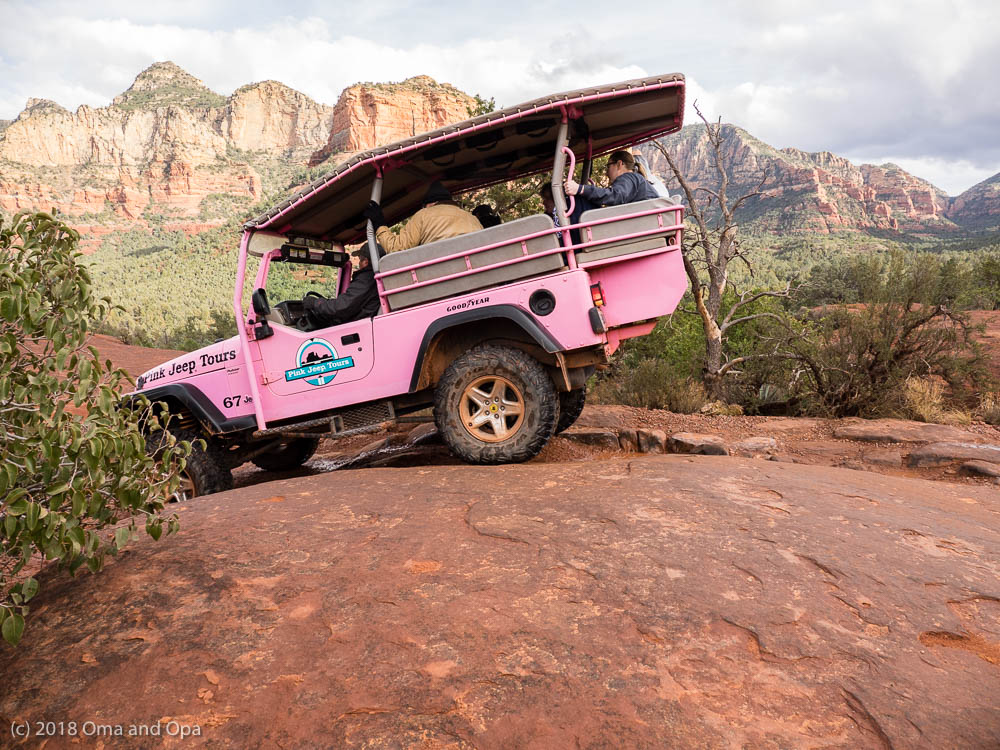 After doing a crazy loop among the red rocks, we eventually returned to the trail and worked our way back to town. On our way out, our driver stopped at a cenote near the start of the trail. It was a nice finish to a crazy afternoon. All told, we were out for a little over three hours and managed enough jolts to last me a couple of months. 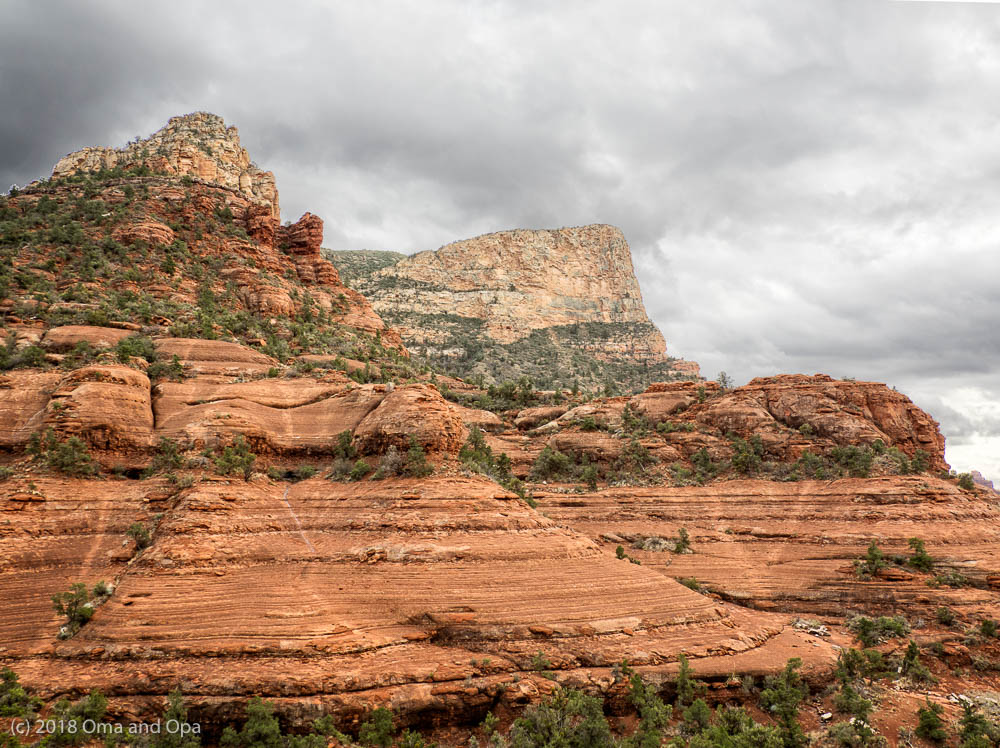 The jeep tour wasn’t cheap, but it’s the only large “entertainment” expense we’re likely to have on our trip. It got us out to viewpoints we would have never seen otherwise, and it was fun in a bone-jarring, organ relocating way. Oma especially had a blast. We had no regrets on the splurge, and Oma even suggested that perhaps a Jeep of some kind might make a good toad if we ever decide to tow one behind the motorhome. 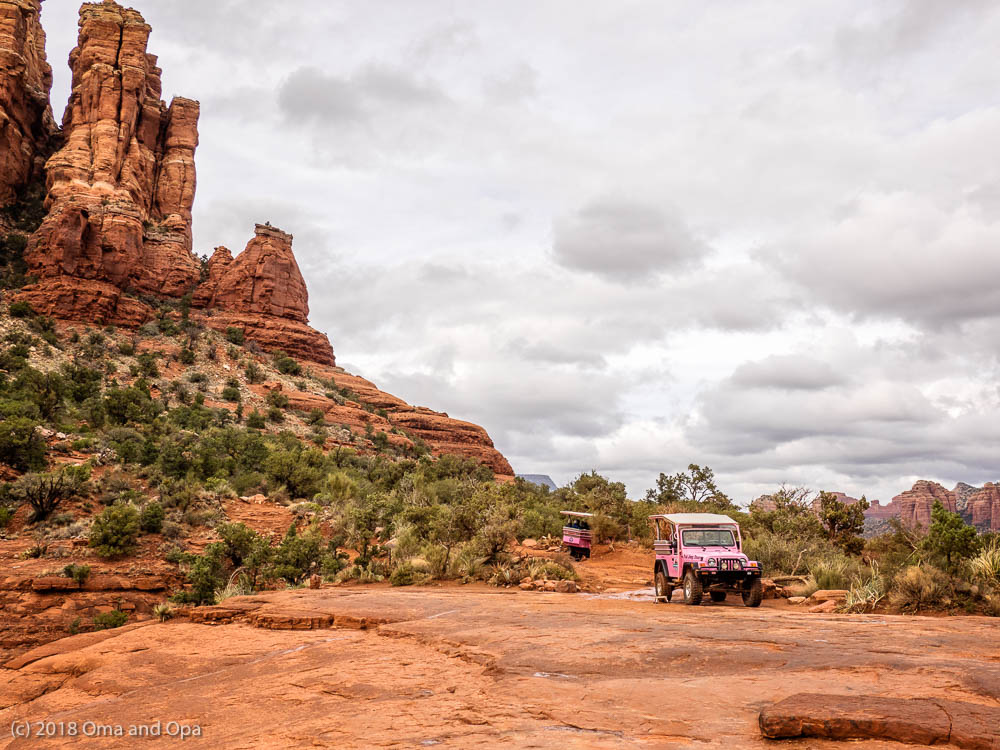