Warning: Parameter 2 to wp_hide_post_Public::query_posts_join() expected to be a reference, value given in /home/customer/www/annieandthebeast.com/public_html/wp-includes/class-wp-hook.php on line 308
 Into the Klondike (Klondike Highway) – June 2018 – Annie & The Beast
Skip to content 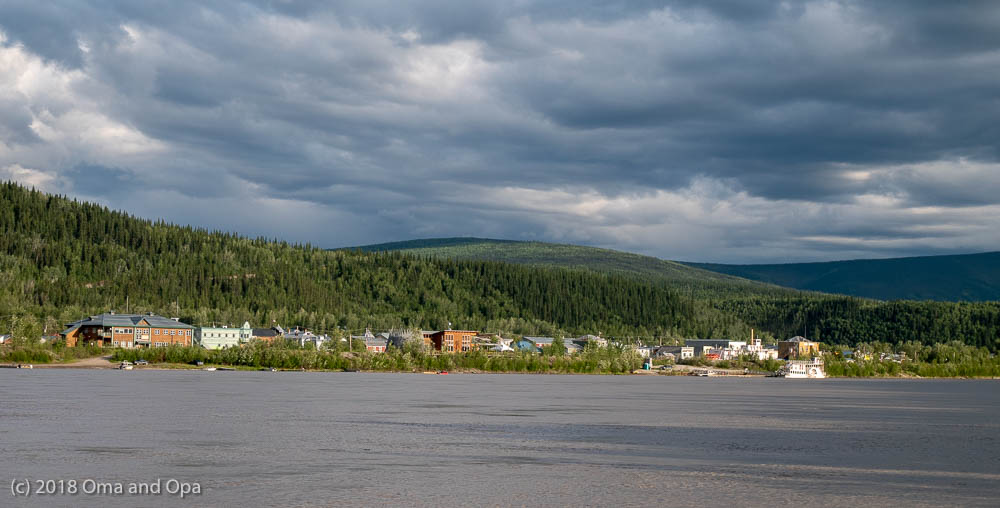 From Whitehorse, we left the Alaska Highway and headed north toward the Klondike. The Klondike Highway between Whitehorse and Dawson City was built in the 1950s, ending the era of the steamships. Today, it is a paved road in mostly decent condition. 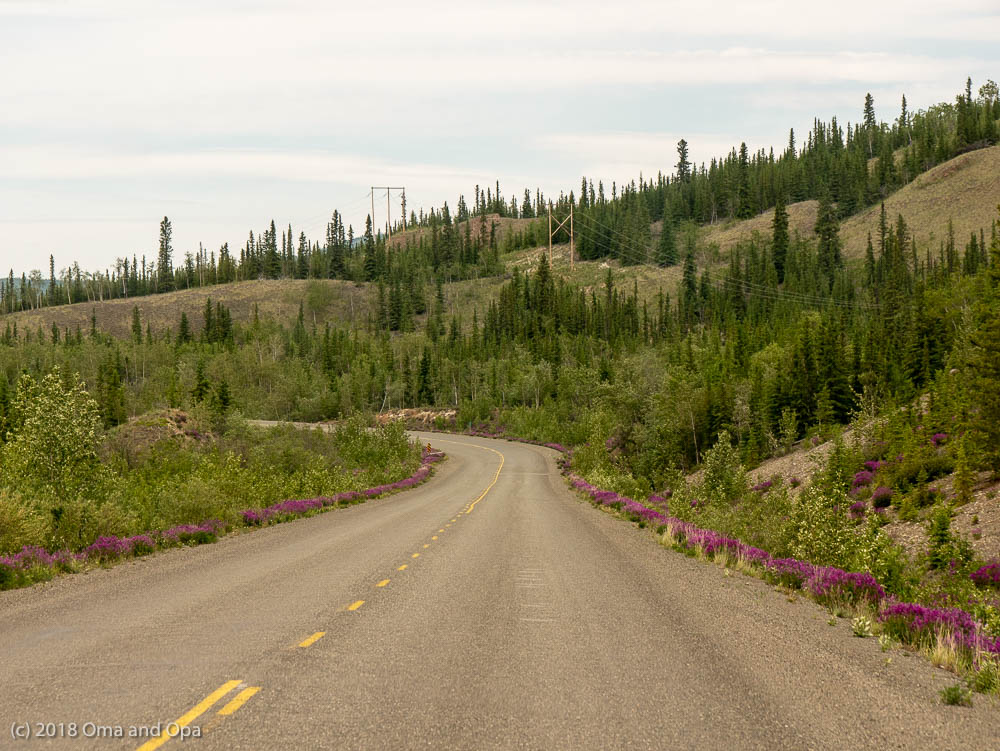 After shopping in Whitehorse, we headed north past Carmacks to Tatchun Creek, a small, 12-site Yukon government campground. The Yukon campgrounds are not as well kept as the British Columbia Provincial Parks, but they are inexpensive ($12 Canadian) and include free firewood (you have to split it yourself though). This campground had a couple of sites on the creek suitable for tents or perhaps a small van. We chose a larger site that still had a bit of a water view. 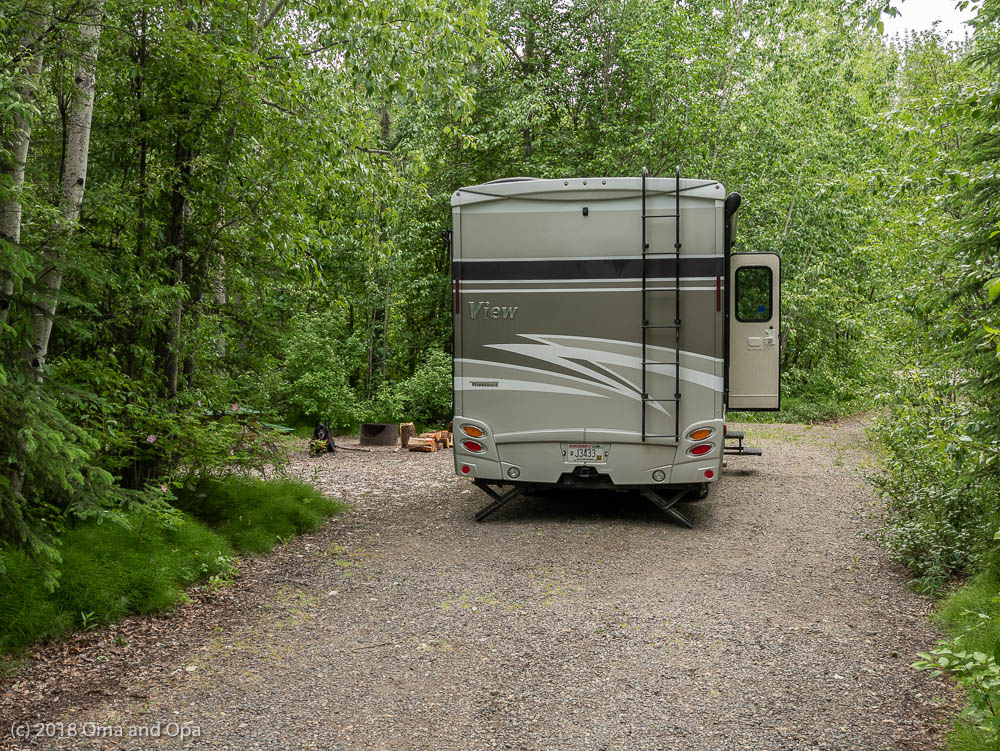 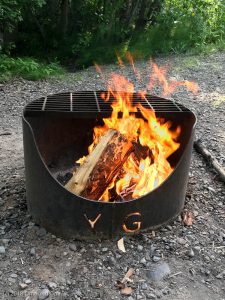 For weight reasons, we did not pack an axe for splitting wood. We don’t do that many campfires, and we didn’t expect to spend a huge number of nights camping in Yukon campgrounds. However, the campground was empty, and we were able to scavenge enough split pieces from the empty campsites to build our first fire of the trip. We have been through several Yukon campgrounds that were full or nearly so, but here we only had a couple of other campers join us the night we were there. 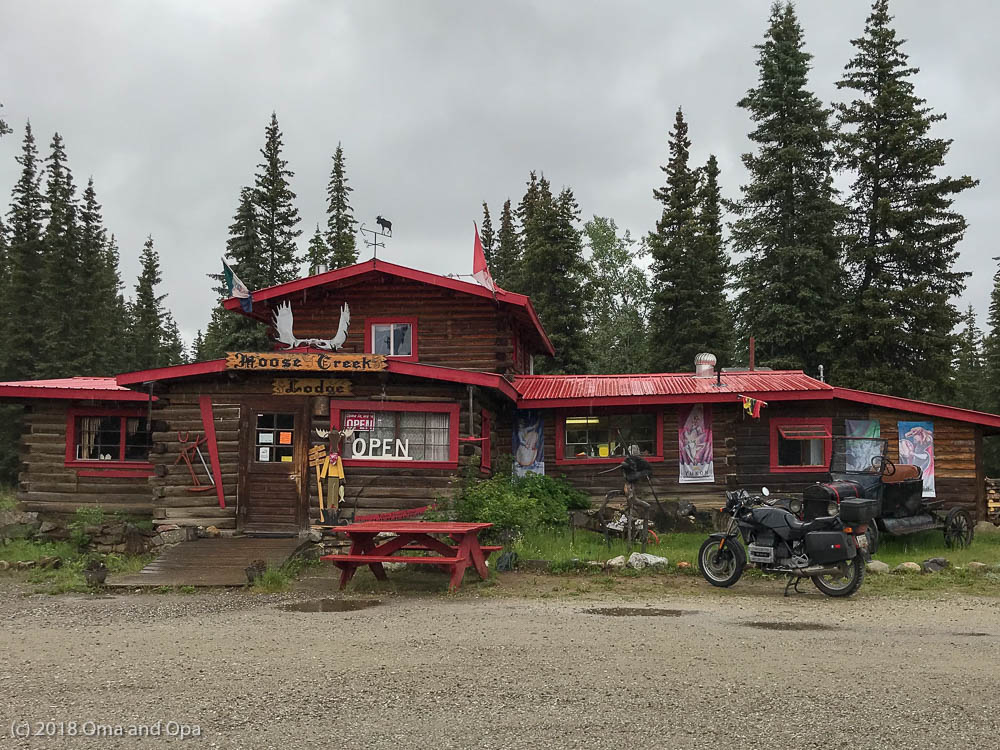 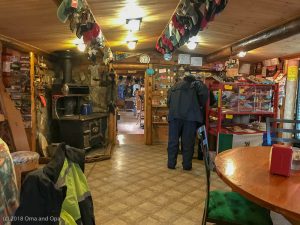 Our string of good weather days ended the next morning with a rainy drive to Dawson City. Around noon, we pulled off at a small roadhouse called Moose Creek Lodge. The restaurant has only four tables, and it filled quickly. 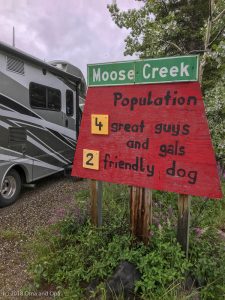 With travelers and especially motorcyclists looking for a reprieve from the rain, we ended up sharing our table with a motorcyclist from Vancouver. We enjoyed the special of the day, soup and a “beef sausage roll” (basically, beef baked into a pastry). They also have a few rooms and a large gift shop, which Oma took advantage of after lunch. 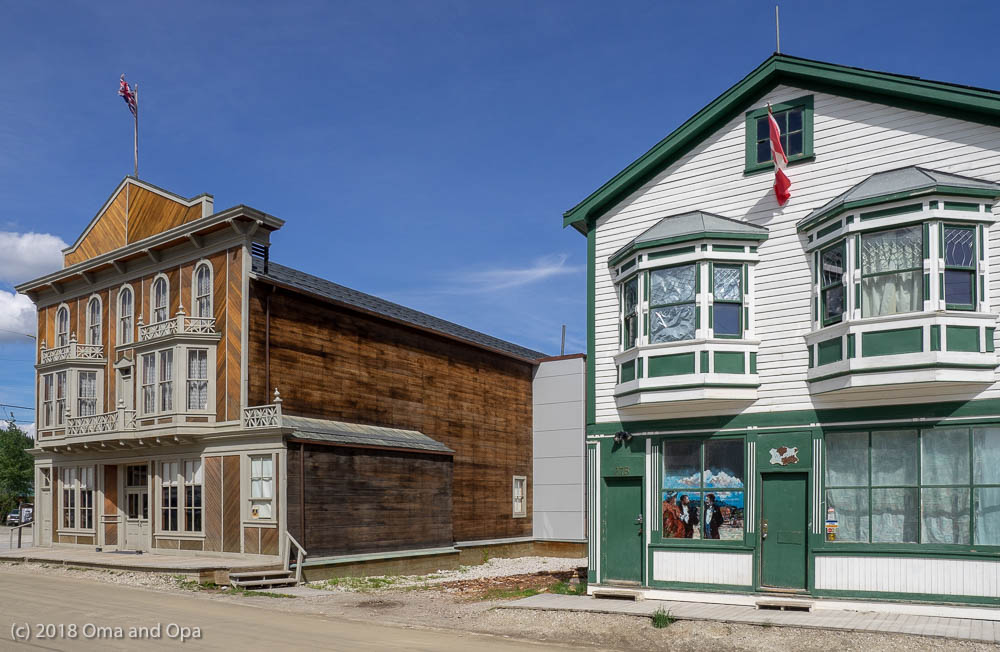 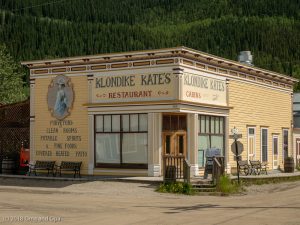 Dawson City was created during the Klondike gold rush of the late 1800s. Although most of the prospectors moved on after a year or two, mining has continued through to today. Except for the Klondike Highway, the streets in town are still dirt. Numerous classic buildings survive (they have strict regulations), many in private ownership and some part of the Canadian Government’s Klondike National Historic Sites. Today, the town is mostly about tourism. 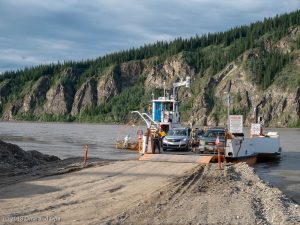 The road ends at Dawson City. Connections to points north are via the George Black Ferry in warmer weather and – usually – an ice bridge during winter, although the last two years the river never completely froze due to warmer temperatures. Our campground was just on the other side of the river from town, so we pulled up to the ferry line and had no RVs in front of us. (They split traffic for boarding, and usually one RV (occasionally two) gets to go across per ferry.) We’ve heard of RVs waiting 1-2 hours to get across at peak times.

The Yukon River Government Campground is large (over 100 sites). Some sites are along the river, but most are not. The whole area slopes toward the river, so sites tend not to be super level. There were few sites available when we arrived (probably due to a solstice motorcycle ride the two days before), so we picked a site on the back side of the loop. It was actually a nice (small) pull-through, although it did require a climb up to the campsite from the road. I’m not sure I would have wanted a downhill site, as many of them ended up with pools of water after rains.

The next day we crossed the river and walked into town after lunch for a walking tour. The theme was Strange Things Done in the Midnight Sun. Our park guide, Sue, walked us around parts of the city, let us into three (otherwise closed) park buildings and told various strange stories of the Klondike. It was an entertaining and informative 90-minute tour. We wandered a bit more following that, and Oma did some shopping before we headed back to the campground.

After dinner, we crossed back into town and walked to Diamond Tooth Gerties, a town-run casino and bar with three different 30-minute stage shows at 8:30 pm. 10:00 pm and 12:00 am. We went to the 10:00 show and enjoyed a little touristy entertainment. The singers were good and the show was okay. The oddest part was walking home after 11:00 and having the sun still up. No flashlight required.

The next day we took the motorhome into Dawson and dumped and filled at one of the RV parks. Then we headed up into gold territory and checked out Dredge #4 and Bonanza Creek.

Much of the gold in the Klondike was too difficult for individual miners to extract. Eventually, well-funded companies moved in that built expensive dredges to efficiently extract gold buried in the ground. Dredge #4 was built in 1912 for the Canadian Klondike Mining Company, and was the largest wooden hulled bucket lined dredge in North America. Dredging continued up to the middle of the 20th century, and Dredge #4 worked from 1912 to 1959. Today it is managed by Parks Canada, who do hourly tours through the interior of the dredge. 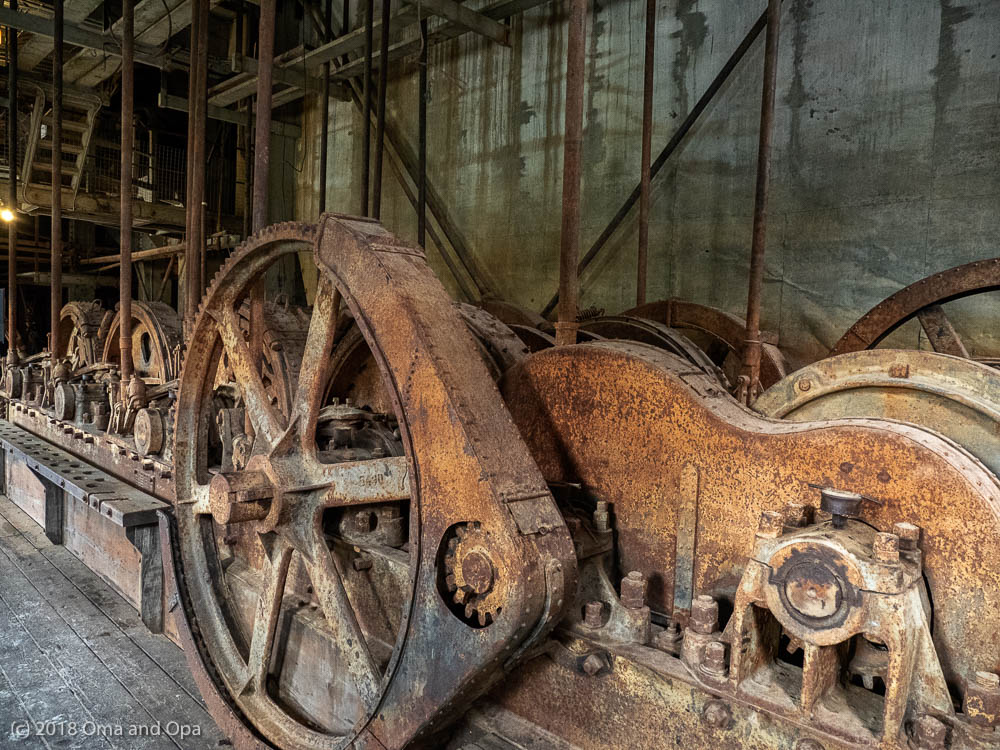 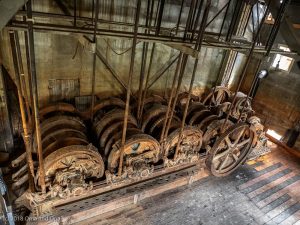 The hour-long tours are $20 Canadian (about $15 US) per person, a little expensive but I found both the history and the dredge itself to be extremely interesting. Our tour guide was from Quebec, so English wasn’t her first language, but she was still able to clearly communicate the information.

After the tour, we went another mile or two upstream to where the discovery that set off the gold rush was made. Coda enjoyed tagging along on the short path.

We also hit midnight dome, an overlook above the town. The weather didn’t give us beautiful pictures, but it was a nice view of the river, town and some of the surrounding gold country.

Our last excursion required walking along the beach from our campground to the “sternwheeler graveyard.” When the sternwheelers were removed from service in the 1950s, three of them were hauled up on the shore and left just past where the campground now ends. 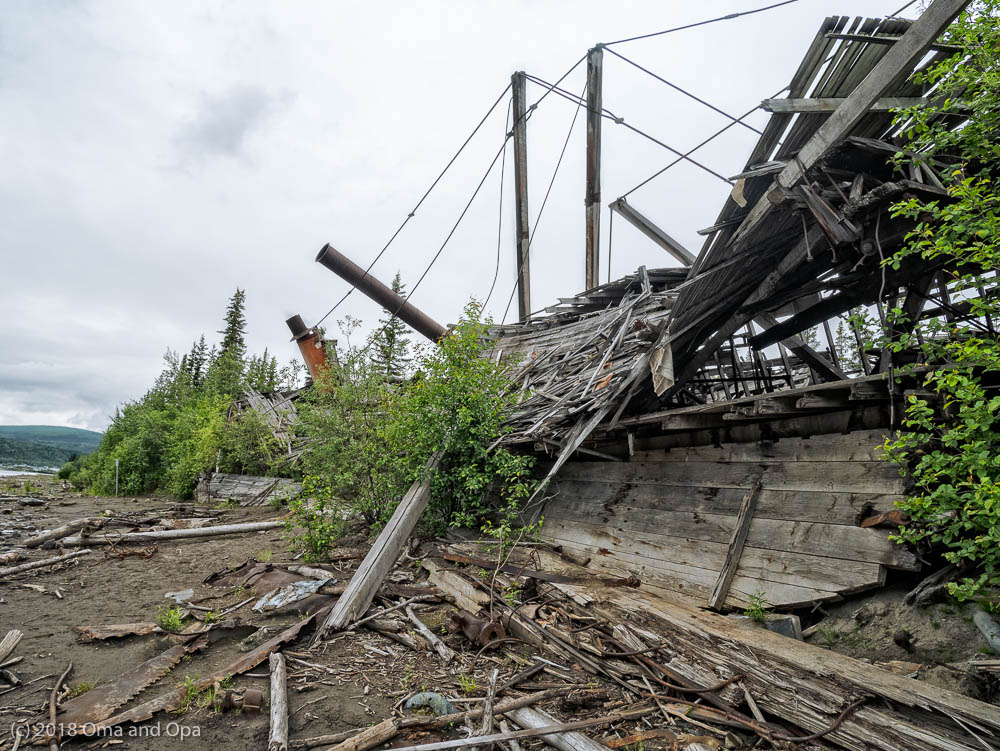 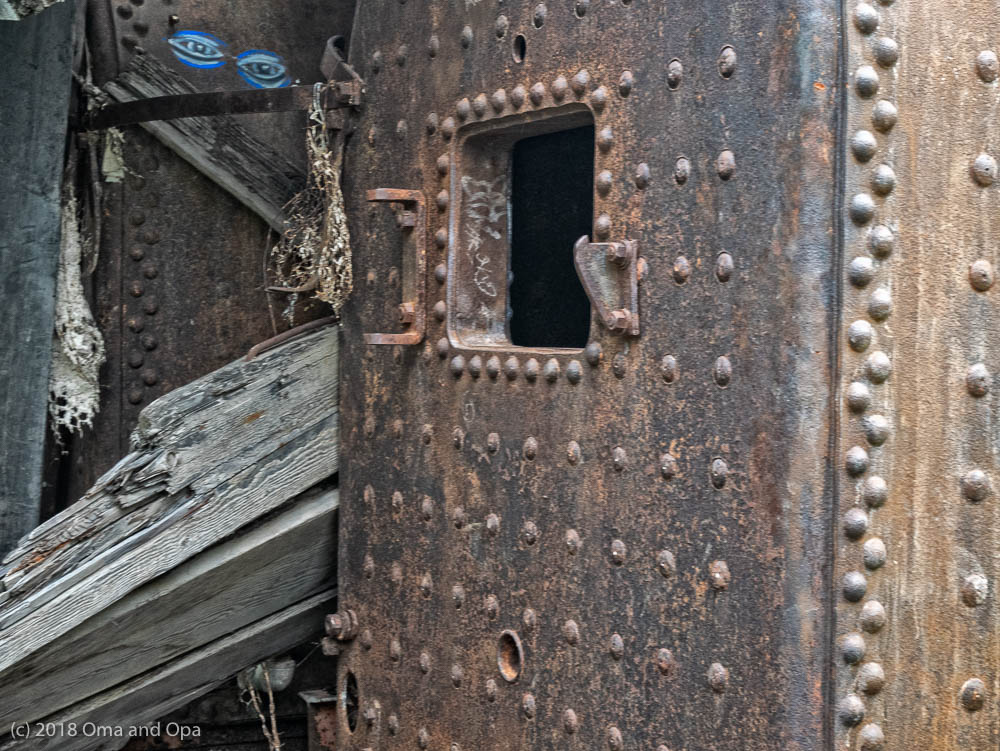 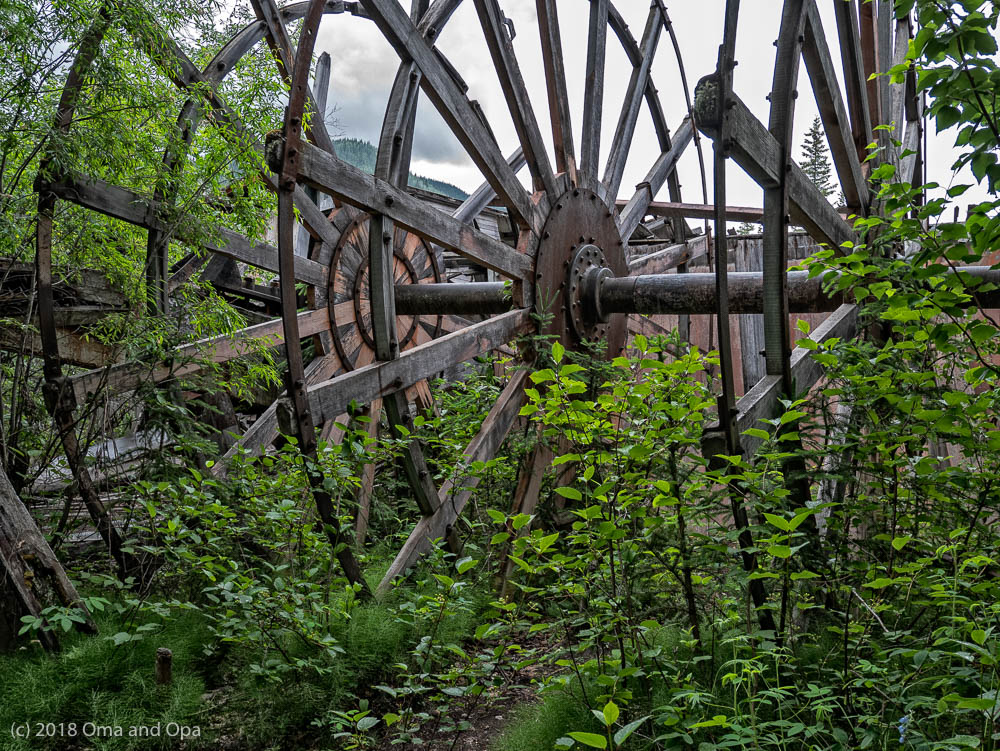 Sixty years later, the remains are in rough condition and I would not even consider setting foot in the ruins. However, you can see what remains from the beach and from paths that encircle the ships.