Warning: Parameter 2 to wp_hide_post_Public::query_posts_join() expected to be a reference, value given in /home/customer/www/annieandthebeast.com/public_html/wp-includes/class-wp-hook.php on line 308
 I Left My Heart in Valdez, Alaska – June/July 2018 – Annie & The Beast
Skip to content 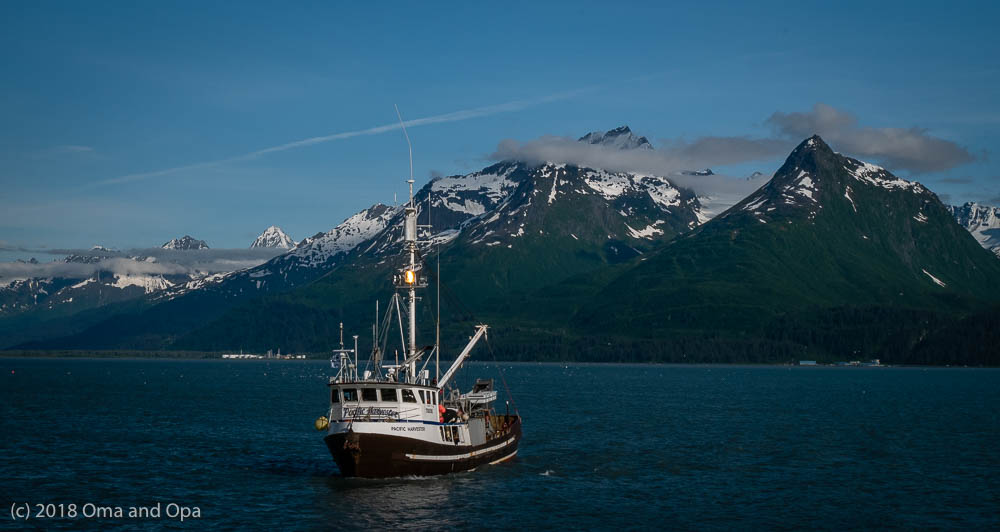 Our campsite in Valdez was on the water. Surrounded by mountains and glaciers, beautiful clear water, and boats traveling along the fjord of the Prince William Sound. What a spectacular sight! So much beauty to behold!

We were able to snag a campsite at the Bear Paw II adult only campground. The #1 rule is Quiet Time is All the time. It is a small campground with waterfront sites overlooking the Prince William Sound and right by the docks. It has full hook ups, and a beautiful clean laundry room and showers. It was a little more expensive than the other campgrounds but worth every penny with the million dollar view and the waterfront campsites. We were near enough to the city to walk to restaurants, museums, groceries, gift shops, and the small harbor.

Very nearby was a lovely municipal park where we walked our dog at least three times a day. The park was always busy with people picnicking, kids kayaking, fishing, and even swimming in the pond. It was delightful with a beautiful mountain in the background. And just beyond the park was the dock where the ferries came in and large fishing boats docked.

Apparently, there was a mama bear and three cubs very nearby that wandered near the park and into the campground. We never saw her though. But we did see an eagle that hung around and even fished right in front of us. There were also sea otters near the docks. And big fat bunnies everywhere!

The feral rabbits are domestic rabbits that somehow ended up released into the wild. While there are multiple theories of how they got there, their origin is a mystery. Some Valdez residents like them and some hate them, but since they aren’t eating our landscaping, we found them very cute and Coda occasionally liked chasing them.

I enjoyed just hanging out at the campsite watching the boats go by, looking at the mountains and listening to the sea gulls scream. We did go out to a popular restaurant, The Fat Mermaid, and enjoyed some cocktails and good food with another couple that was camping next to us. We met a lot of very nice people in the campground as well.

We went to visit museums, wandered the various docks and took a spectacular cruise with the Lu Lu Belle to the Columbia Glacier which we’ll cover in a future post.

Valdez has had a rough history, though. The town was originally developed in 1898 as a gold rush town. Some steamship companies falsely claimed that  coming to Valdez was a shorter trail to the Klondike gold. But that was a lie and many men died from exposure to the elements and scurvy. The town did not flourish until after the construction of the Richardson Highway in 1899, which connected Valdez and Fairbanks. With a new road and its ice-free port, Valdez became permanently established as the first overland supply route into the interior of Alaska.

But then there was the 1964 Good Friday earthquake. The town was shaken but not destroyed. As a result of the earthquake, however, the town’s glacial silt foundation liquified and much of it slid into the sea. This caused a tsunami which killed 32 people on the dock. (The tsunami devastated other communities, but since it originated in Valdez it caused little damage there.)

After that the army corps came in to relocate the town just a few miles over from where it stood on more stable ground. The original town site was dismantled and abandoned. Then in 1989, the Exxon Valdez oil spill occurred after the oil tanker Exxon Valdez left the terminal at Valdez full of oil. The spill occurred at Bligh Reef, about 40 km (25 mi) from Valdez. Although the oil did not reach Valdez, it devastated much of the marine life in the surrounding area. The clean-up of the oil caused a short-term boost to the economy of Valdez.

As if that wasn’t enough, on January 24 and 25, 2014, a major avalanche occurred just outside Valdez near Keystone Canyon, closing the only highway in or out of town. I would say that the people of Valdez are very strong and durable indeed.

We spent five nights in that beautiful campsite overlooking the fjord of the Prince William Sound. It was beautiful and calming. I didn’t want to leave except that I know that more beauty awaits me in other parts of Alaska. But, I left a piece of my heart in Valdez.