Warning: Parameter 2 to wp_hide_post_Public::query_posts_join() expected to be a reference, value given in /home/customer/www/annieandthebeast.com/public_html/wp-includes/class-wp-hook.php on line 308
 Homeward Bound – Annie & The Beast
Skip to content 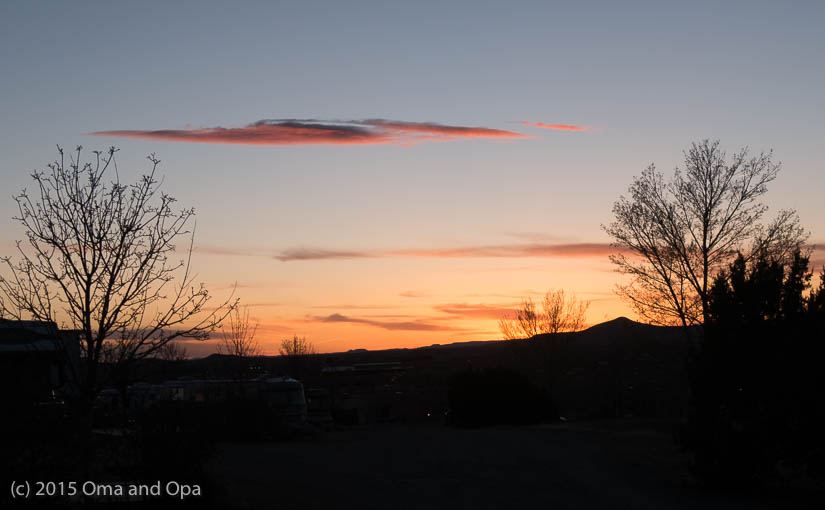 Leaving Tucson, we wanted to pace ourselves and take it easy. We had an appointment at the Excel Service Center in Smith Center, Kansas that we needed to get to by March 28th at 7:30 a.m. That meant we needed to be in front of the service door the night before.

So we backtracked, and our first stop out of Tucson was back at the Escapee Dreamcatcher’s RV Park in Deming, New Mexico. Then we checked the weather which was predicting extremely high winds the next day. We decided to hit the road early and hopefully be off the highway before the winds got too strong.

We made it to Santa Fe Skies RV Park and got settled down before the weather hit. The remainder of the day and the following day were horrifically windy and I’m happy to report that we did not blow away. It was also much cooler. We stayed very comfortable in our cozy home on wheels. We chose to stay there another night which left us a beautiful day to wander and explore if we wanted to, but I was coming down with something, and Opa was still tired from his escapade in Tucson. We decided that a nice New Mexican lunch at Tomasita’s, and a quick stop in two nearby shops was more than enough of an adventure for us. The Santa Fe Skies RV Park was quite a nice park to stay in. They have a great trail around the perimeter to walk and we enjoyed views on our walk as well as from our site. It was very clean and well maintained.

The next morning came quickly and this time we needed to dodge a snowstorm coming in. We were headed into Colorado. Oh why, oh why, are we heading north into colder weather? We made it to eastern Colorado and settled in at Lake Hasty on the John Martin Reservoir State Park. This may have been a nice enough campground in nicer weather but I really wasn’t enjoying myself too much here. We were in a lovely site and had a great view of the lake, but it was cold. Because of the weather forecast, we chose to stay an extra day, and sure enough, it did snow on us. Thankfully, the following day was clear. We had easy driving, and we were able to move on to Smith Center, Kansas.

We were looking so forward to having all of our 5th wheel problems solved at the Excel Service Center, but that was not meant to be. In a normal situation, our 5th wheel would still be under warranty because we just picked it up, special order, last year. Unfortunately, the company that built it, Peterson Industries, went out of business the day that we picked our 5th wheel up and drove off the dealer’s lot. Since then, former employees opened the Excel Service Center as an independent operation. We were looking forward to a staff that had experience with our 5th wheel. Part of the problem was that with our 5th wheel being so new, they hadn’t had much experience with the newest bells and whistles. Many of the suppliers of parts discontinued the products (for example, the fiberglass sink, which was made in town, is discontinued). And who knows where our leaky dishwasher was sourced from. They also could not fix the leak in the utility bay that we’ve had from day one. However, they did fix and straighten out a number of other problems. They completed the work in a day and a half, we wrote them a nice check, and really wanted to get home.

We left Smith Center at 1:30 in the afternoon. All we wanted to do was drive as far as we felt good enough for. We drove into Nebraska and then Iowa, and finally pulled into a rest area for dinner and some sleep since many of the campgrounds and rv parks are still closed for the season. We only pulled out the kitchen slide, so that we could make dinner, and the dog could sleep comfortably on the couch. The dog and cat did not like the change in our house arrangements, but they endured. The next morning, we woke up, had a quick breakfast, the dog had a quick walk and off we went. It was a long day for us, but we made it home by dinnertime. Home sweet home.