Warning: Parameter 2 to wp_hide_post_Public::query_posts_join() expected to be a reference, value given in /home/customer/www/annieandthebeast.com/public_html/wp-includes/class-wp-hook.php on line 308
 Denali NP and the Savage River Area – August 2018 – Annie & The Beast
Skip to content 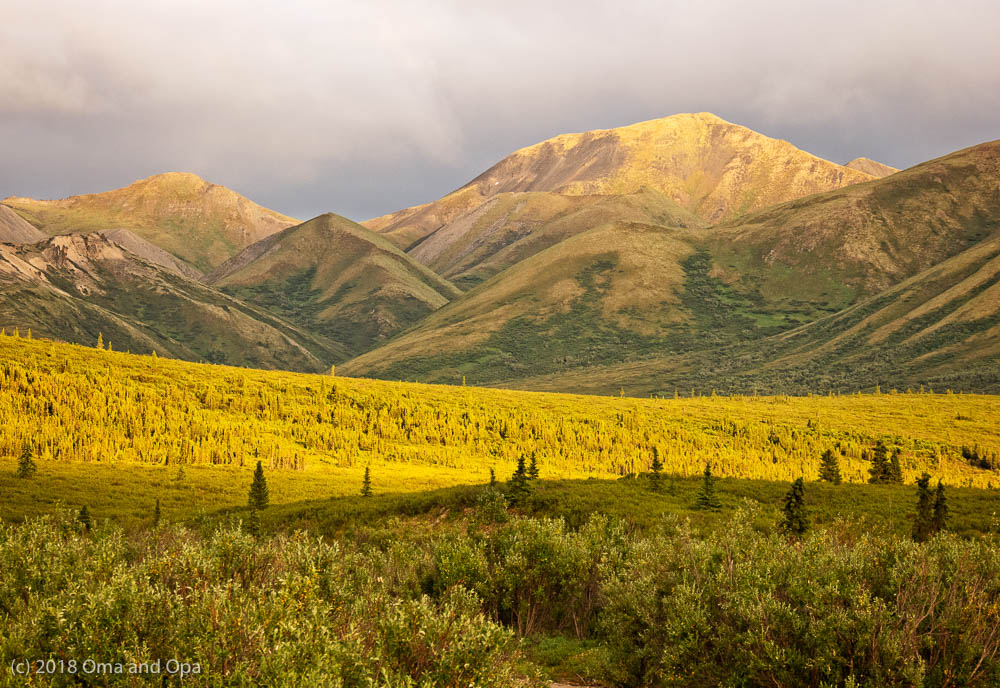 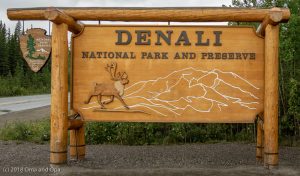 The girl who checked us in seemed nearly useless. Although she was only doing campground check-ins, it took her ten minutes to find our reservation and then she gave us wrong (or at least only partially correct) information about where to stay in our first campground. Still, we were checked in for both Savage River and Tek (see next post) campgrounds by the time we left.

From there, we headed to the WAC (Wilderness Access Center), same concessionaire but different building a mile down the road. We needed to get our bus passes for Tek. (More on that in the next couple of posts.) They had tried to sell us our passes months in advance, but we had deferred since we would have been out the money if something had happened. While I would not recommend trying to get a same-day Tek pass if you can avoid it, there were absolutely no issues getting our Tek passes three days ahead.

After that, we finally made it to the Visitor Center, the first area that we interacted with park staff and volunteers. We got some information on the areas around Savage River and Tek and watched the two movies. The first movie provided guidance for hiking in the park and was worthwhile. The second was pretty video without much narration and I found it pretty boring. There wasn’t anything wrong with the pretty video; I would just have preferred they take the opportunity to educate me a little about the park (history, geology, flora, fauna, etc.) while they were showing the pretty video. It seemed like a real missed opportunity.

From there we finally headed out to our campground for the next two days, Savage River Campground, at mile 13 on the park road. There are two rv-friendly campgrounds within the 15 mile stretch of park road that can be driven without a special pass. Riley Creek is at the entrance and seems very busy. It’s bigger and has the advantage of nearby park stores (with limited selection and high prices, but if you need that cappuccino or latte to be available nearby, it’s your campground. Riley Creek also has the advantage of having cell coverage, showers and laundry. 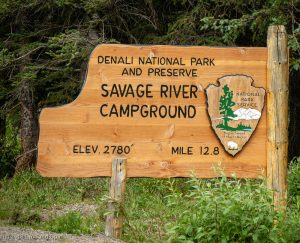 Savage River Campground was much smaller and quieter. We were well out of cell range, and it felt like much more of a wilderness experience. There are two trails available from the campground, and a free shuttle bus allows you to do a one-way hike or get to another nearby trail without driving.

As with all the campgrounds in Denali and many national park campgrounds, there are no hookups. Campsites in Savage River are either “A” or “B” campsites. (Technically this is about RV size, although there were some big “small” sites. Thanks especially to the misinformation we got, it became confusing.) We followed the instructions of the girl who checked us in and found only one campsite available. Or at least that looked available. After setting up and leveling our motorhome, we found that someone else apparently had taken the site but left their tag on the ground rather than the post and no chairs or other indications that they had the site. Hmmm. Now what to do?

We wandered through the campground and eventually found the host, who was fortunately home. She showed us another site that was available for us but not in the sites that the misinformation girl had marked for us. It was a pain to close the motorhome back up and set up again in another site, but the new site was nicer and more level, so it was a net positive in the end.

The weather was cloudy the entire time we were at Savage River and threatened rain, but fortunately we stayed mostly dry. Oma was nursing a sore foot, so we decided to just hike partway up the Savage Alpine Trail from the campground and then turn around. 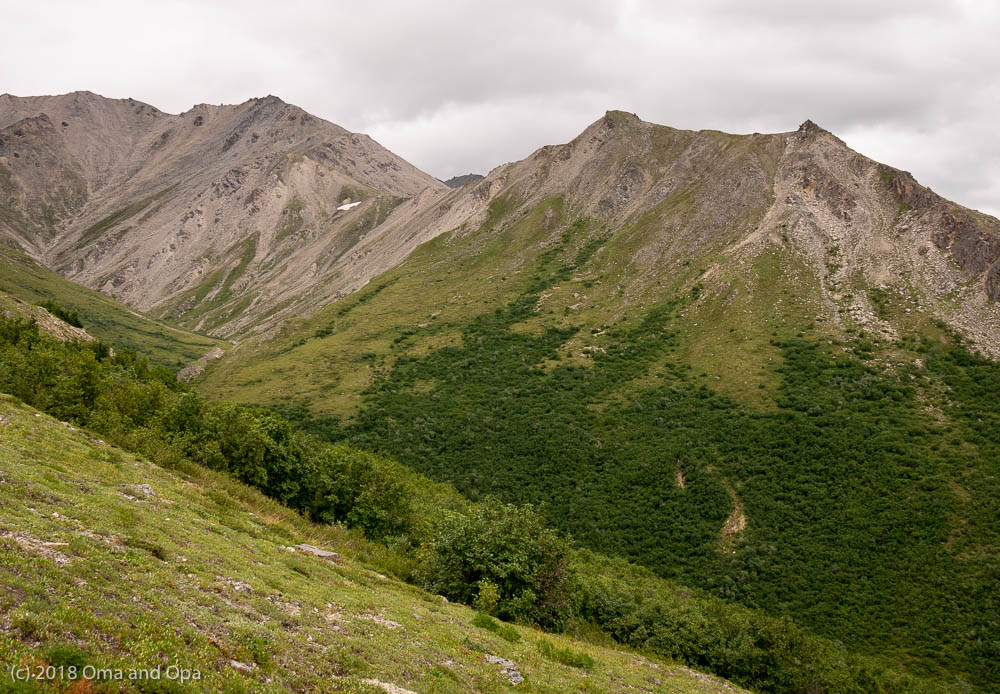 The trail is about 4½ miles long and climbs about 1500 ft. The trail at the campground end has a more gradual slope, with the other end at the Savage River parking lot being quite steep with many rough stone steps. Shortly after starting the trail, a hiker coming reported a moose and calf very near the trail nearby (in the trees). While we would have loved to see the moose, I prefer to keep a safe distance, especially with a calf around. For better or worse, the moose had moved enough into the trees that we did not see them when we walked by that area a few minutes later.

We quickly crossed above the tree line and the alpine views were stunning, even on a cloudy day. Oma being Oma, once we had gone about 1½ miles up the trail, she decided she had enough invested that she wanted to keep going to the top and complete the whole thing. And Oma being Oma, she only complained a little bit about the next three miles of up and down.

Eventually we reached the high point and started working our way down. This stretch is rockier and steeper. It is also more exposed in some sections. Being steeper it is at least shorter than the way we took up. We watched a shuttle bus leave when we had just started down the step section of the trail, but the timing ended up pretty good since by the time we finally reached the bottom and walked across the bridge to the bus stop, we only had to wait 5-10 minutes for the next shuttle back to our campground.

After dinner, the sun actually broke through a small section of sky so I took a walk down to the river (only about ¼ mile from the campground) and enjoyed watching the light on the mountains and the sun set behind a cloud.

We really enjoyed our two nights at Savage River and would have been happy to spend another day or two and do more hikes. It was a beautiful, quiet area that I will definitely come back to the next time I’m in Denali. 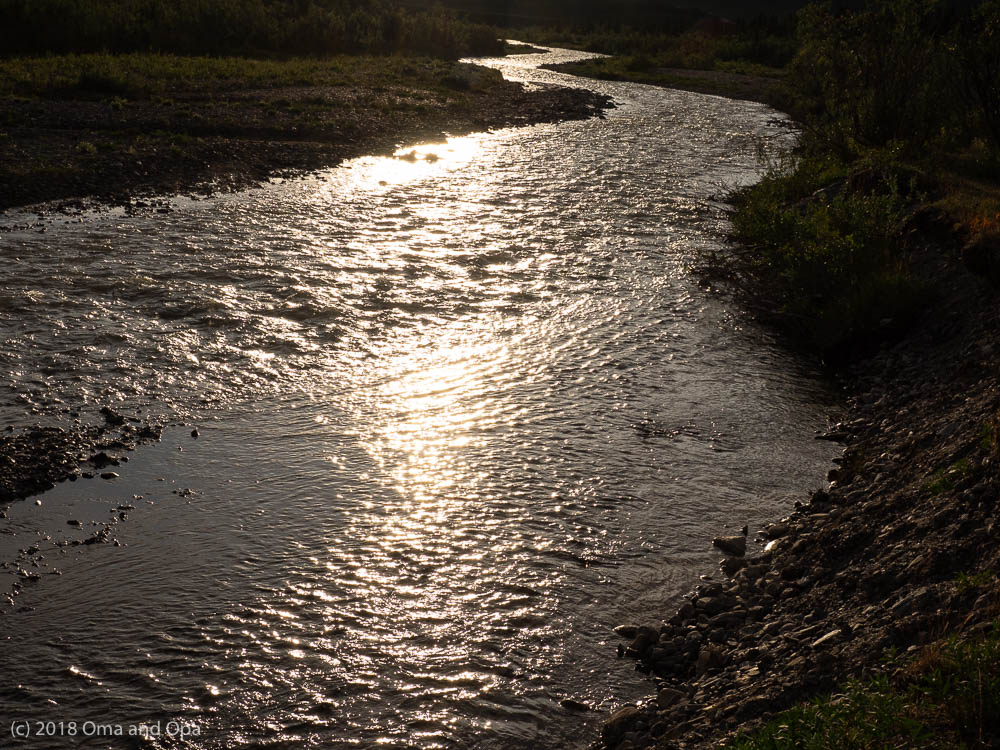