Warning: Parameter 2 to wp_hide_post_Public::query_posts_join() expected to be a reference, value given in /home/customer/www/annieandthebeast.com/public_html/wp-includes/class-wp-hook.php on line 308
 Caprock Canyon with the Kids and Grandkids – March 2018 – Annie & The Beast
Skip to content 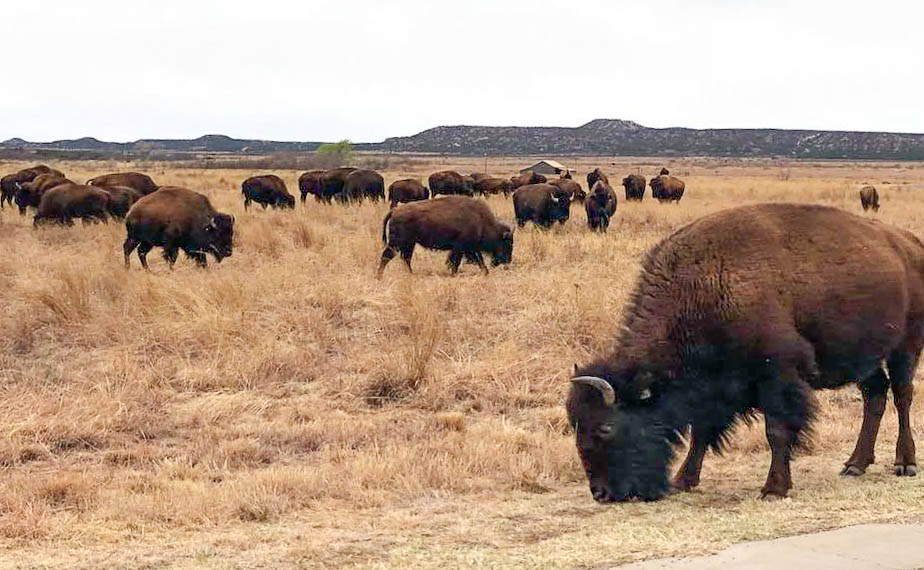 Way back around Thanksgiving, I was talking to my daughter about our upcoming winter travel plans. Not only were we coming down to visit her for Christmas, but she suggested that we meet and go camping together over spring break. She suggested Caprock Canyon State Park in Texas as that has been on her bucket list for a very long time. So a plan and reservations for a campsite were made. The park also has a lot of ranger led tour activities that you can make in advance. But I didn’t know that and when I called two weeks in advance to sign up for tours, they were already booked through April. Darn!

Again the drive from Palo Duro Canyon to Caprock Canyon was flat, dry, and boring. But then there’s a big surprise as you pull into the park. The first thing we noticed were some bison wandering on a path near the road. Then you get views of another beautiful canyon. Upon check in, we notified the ranger that we were expecting our daughter and family to join us. We needed a big enough site for us and their big tent. The ranger selected the perfect spot for us. A huge site with a short walk to the bathrooms, a playground in between and a prairie dog town next to the bathrooms and playground. Our grandkids loved it! But watch where you step because there is bison poop all over the place. The bison roam free, even through the campgrounds! 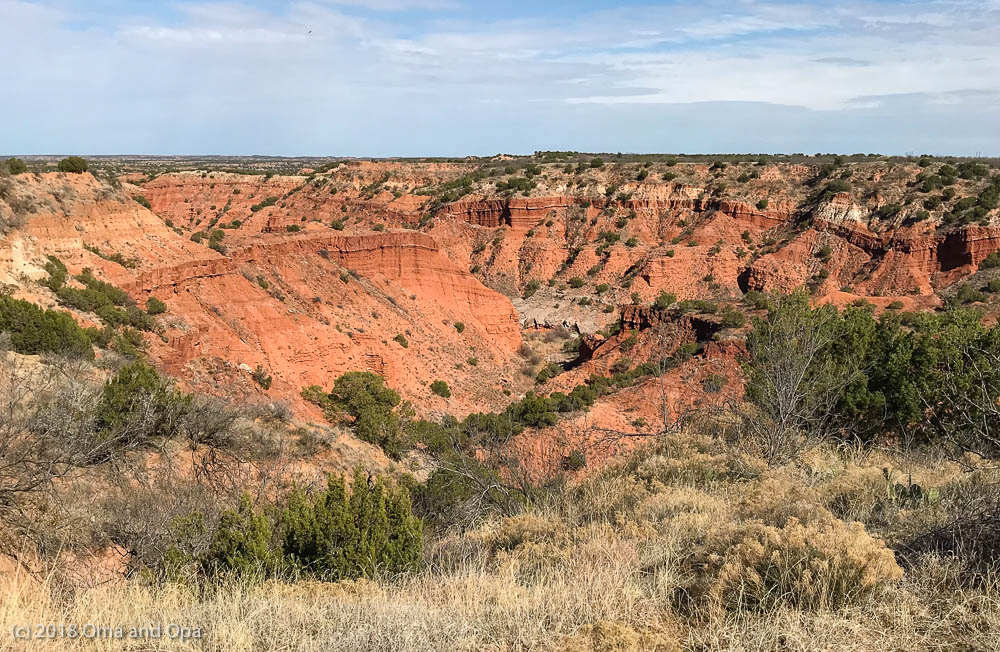 One of the differences between Caprock Canyon and Palo Duro Canyon State Parks is that at Caprock Canyon you are camping on the flat bluffs above the canyon and at Palo Duro you camp down in the canyon. Geologically they are a bit different also. Caprock Canyon is mostly redrock, the colors  caused by oxidation of iron in the sediments at the edges of an ancient sea with stripes of white layers of alabaster gypsum and satin spar gypsum which represent periods of evaporation of the sea water and solidification of the minerals left behind. Palo Duro Canyon shows more layers of different colored rock, some very red because of oxidation, and some whitish bands that did not get rusted, and some yellows and purples too. There are also some very narrow stripes of gypsum in some areas. Personally, I loved the gypsum strands because they sparkle and shine like diamonds. 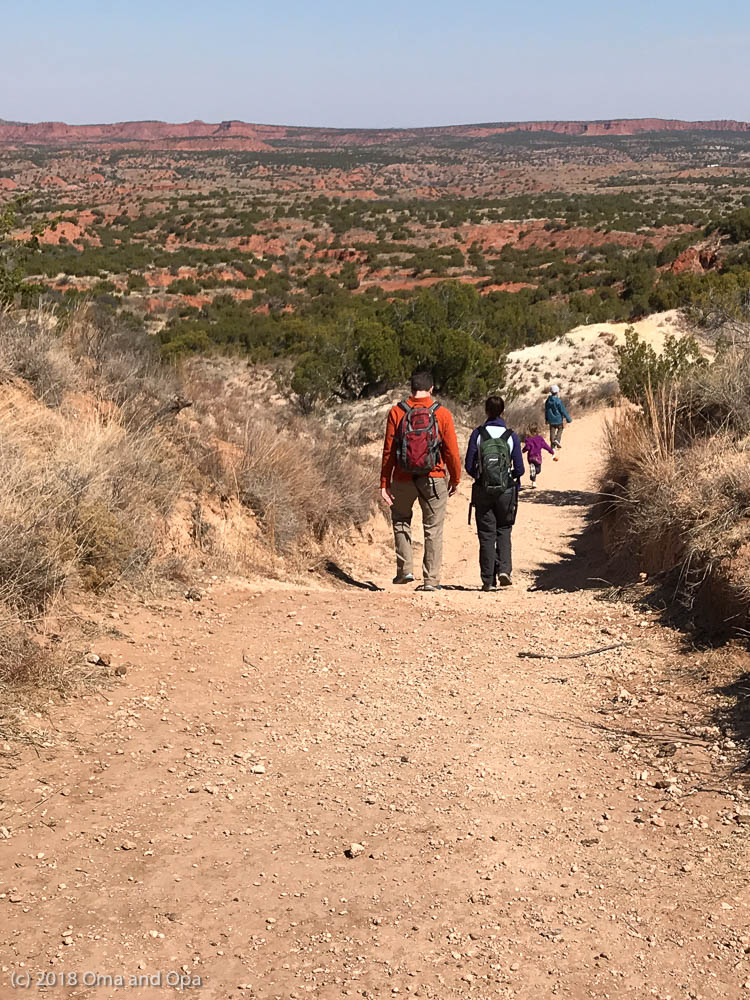 We hiked the Eagle Point Trail. It was an easy hike for me and the grandkids with spectacular views and scenery. The weather was perfect and we included a little picnic along our trail. On our drive back to the campsite, we were stopped by a herd of bison in the middle of the road. There were at least 30 bison blocking us! This may have been the highlight of this trip. What an awesome sight just a little too close for comfort, really. But a perfect day for all of us.

The next day, we hiked a segment of the Trailway which is an abandoned rail bed. You can hike or bike from many different points at road crossings. It is a very nice trail for biking, but it didn’t do much for us for hiking. It was hot day and the trail was just not that scenic. I would’ve liked to have hiked to the tunnel which is inhabited by Mexican bats, but the hike was too long and the bats haven’t migrated back yet anyway. 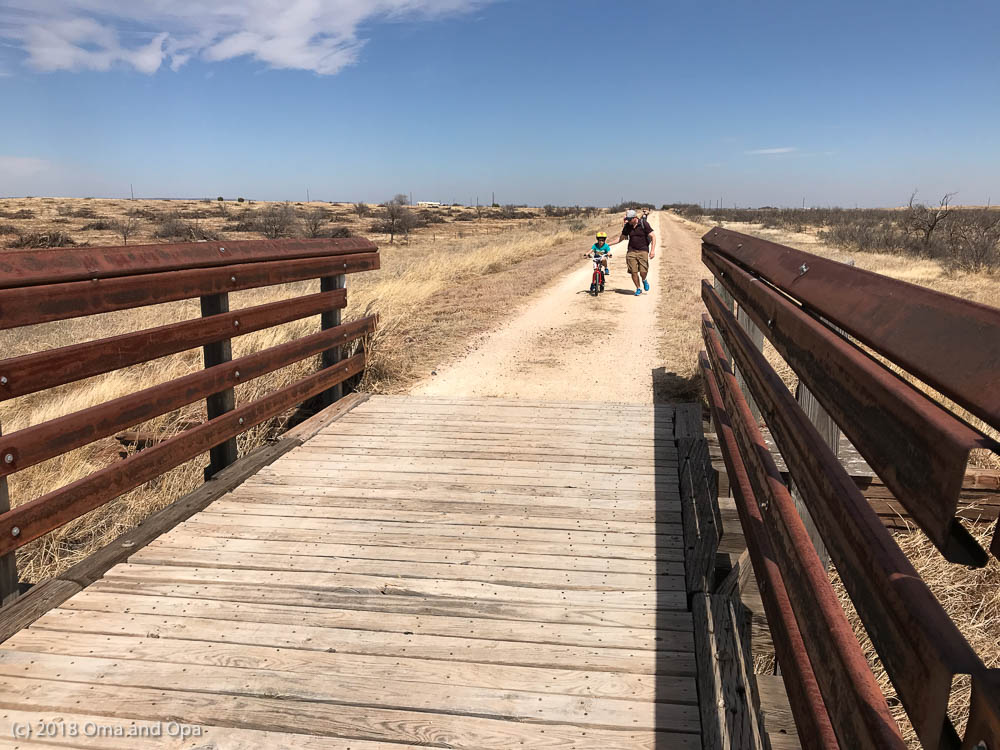 We also attended a couple of the evening ranger lectures at the amphitheater. We learned a lot more about the bison and the fascinating history of how they got their stay at the park. On another evening, we learned about the various park critters.

The grandkids brought their bikes along and enjoyed riding them along the campground and park roads and even the Trailway. In fact, our grandson got his wings on the Trailway and took off on his own. It was a very exciting and happy moment. Actually, this may have been the highlight of the trip!

The second last night got very windy and sometime in the middle of the night, the grandkids, my daughter and my son-in-law entered the 5th wheel in need of another place to sleep. The wind had cracked and broken their tent poles. So we pulled out the couch and some slept in the recliners and we all slept safely in the 5th wheel. The next day, the weather called for even gustier and stronger winds. We had to make some new plans. We decided that we were going to pull in the slides of the 5th wheel, but now things would get way too cozy. Did the kids want to go home a day early or take a ride up to Palo Duro Canyon for the day and return for the night? The weather stated that the winds were to calm down in the evening. So the kids decided to take a nice day trip. We stayed back so the dog and cat were not too freaked out in the closed up shaking trailer. And they said it was not as windy at Palo Duro Canyon and came back and stayed with us in the 5th wheel another night. We had a good and peaceful night.

The next morning the kids had to hit the road after breakfast because they had  a pool party to go to in Dallas. Great ending to a wonderful spring break! I love when the kids and grandkids come camping with us and share wonderful memories together. I can’t wait to do it some more!