Warning: Parameter 2 to wp_hide_post_Public::query_posts_join() expected to be a reference, value given in /home/customer/www/annieandthebeast.com/public_html/wp-includes/class-wp-hook.php on line 308
 Back to Yosemite – Annie & The Beast
Skip to content

I had been to Yosemite in the early 90’s for a couple of days following a business trip to Silicon Valley. I didn’t have a lot of time, but had managed to do some day-hikes in and near the Valley. It was early April and there was still snow on the trails, but I hiked up to the top of Yosemite Falls (I was younger and in much better shape back then), did another hike (don’t recall which one, other than about 30% was actually snow traversal – the trail was buried somewhere below the snow), and hit one of the Sequoia groves on the way out. But mostly I remember how busy Yosemite Valley seemed in early April.

Fast forward twenty-five years (yikes!), and I’m pretty sure the Valley is even busier than I remember. It is still a spectacular place, and I’m sure it would be somewhat better if we had been able to stay in the Valley – we noticed things starting to quiet down a little by 6:00 pm. But the beauty of Yosemite Valley is definitely offset by so many people (us included) there.

The highlight of this trip for me was definitely Tioga Road. Perhaps partly because it had been buried under umpteen feet of snow when I was there last. But, while hardly devoid of people, it was also much less crowded than the Valley, had plenty of its own spectacular scenery, and our hike at the very popular Tuolumne Meadows was actually peaceful. We were not alone on the trail, yet the traffic level was low enough that our “alone time” on the trail far exceeded the time we saw other hikers. As opposed to our hikes in the Valley and even in Mariposa Grove when I don’t think there was a moment we didn’t have some other person in sight. 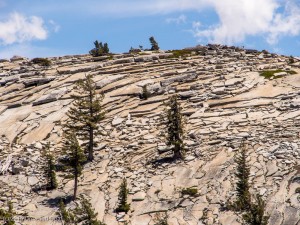 Yosemite, and Yosemite Valley in particular, is a very beautiful place. I hope to get back to it again, and perhaps actually overnight in the Valley. But I’ve been spoiled by other beautiful places that have a much lighter human presence, and being in those places is truly magical.