Warning: Parameter 2 to wp_hide_post_Public::query_posts_join() expected to be a reference, value given in /home/customer/www/annieandthebeast.com/public_html/wp-includes/class-wp-hook.php on line 287
 Back to the Coast – Annie & The Beast
Skip to content 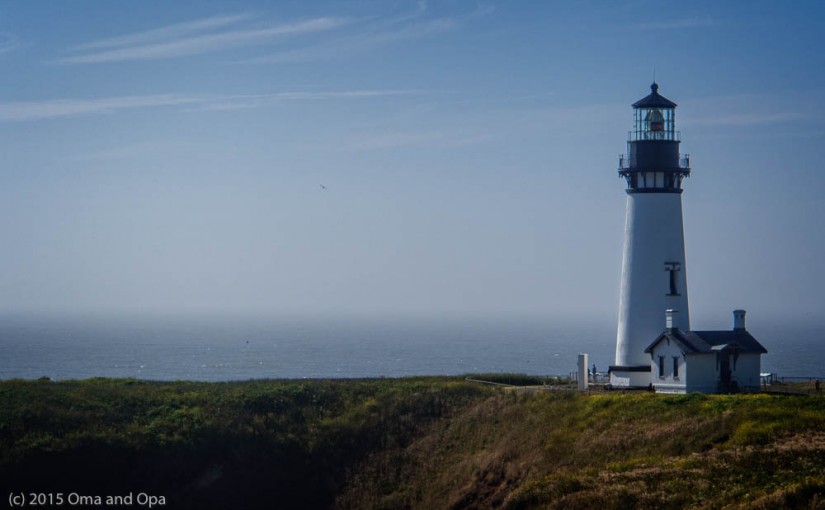 We went inland to Eugene for a few days to add solar panels to Annie. Solar AM was very accommodating in that while they worked on Annie during the day, we were able to stay in a very comfortable waiting room, filled with books and dvd’s, candy, beverages, and with a patio door that overlooked a river and some lovely landscaping including flowers. At night, we were able to pull Annie back out of the garage, into their lot, hook up to electricity, and make dinner, sleep, and shower in our own RV home. The owners and all of the staff were extremely nice and helpful in every way. And we made lots of new friends with other clients there and even those dropping in for information. It was actually a great stay. But it was HOT inland with temps in the low 90’s and going up.

We got done just in time to escape the worst heat and headed back to the coast trying to pick up from where we left off. Our new destination was South Beach SP near Newport. We returned to lovely views of the ocean on our drive. I’m addicted and just can’t get enough of it!

South Beach SP is nice but very busy. The sites have electricity and water hook ups, picnic tables and a fire ring. There is a large playground in the middle of loop C. They have bathrooms and showers available, but I still like to use my own so I take shorter showers and wash dishes in a portable tub (so I can dispose of it in the campsite disposals instead of our tank). They even sell firewood and ice at the hospitality center. Another plus of the park is that the driveways to sites are angled from the road making it easier to back into. Really, that’s a big deal! However, I did not like the water as it seemed to be over bleached and I would not use it for drinking for us or the pets. Oh, and the fog horn! There was a fog horn on the nearby jetty and it never stopped. Never! Yes, there was always some amount of fog in the ocean by that fog horn!

We  pulled in on a Friday night and it was full! Good thing I made reservations in March and I was able to get a good campsite on the beach facing side. Although, there are no views of the ocean or beach from any of the campsites. On the beach facing side,  you are backed up to first an open area, then trees and shrubs, and it feels spacious and private. The trail to the beach from our campsite in the C loop was 1/3 mile and paved much of the way leaving just one large sand dune to climb over.

Friday night, we settled in and just took a walk around the campground. But Saturday, I was itching for an extended walk on the beach. So was Coda. It was fun walking, running, and enjoying sitting on a large driftwood trunk for awhile. I love wave watching! That evening, we went to the day use area to explore the boardwalk trail and get some more views of the beach. There are lots of trails to explore here!

Unfortunately by Sunday, I noticed that my knee was getting super sized, like a small melon. It had been screaming at me several times throughout the trip and dropping hints of discomfort, but I try as much as possible to ignore all of that. But now I can’t ignore it any longer. Time to start the meds my doctor sent along with me in case this should happen. And it did. Now I’m sitting with my leg elevated and ice packs, taking NSAID’s and prednisone. So I ask myself, would I be better off at home? No, because I’m sitting in a great recliner, can sit outside in my comfy reclining chair when the mosquitos aren’t crazy, and doing exactly what I’d be doing at home. With the exception that I got to go to a very lovely restaurant, April’s at Nye Beach, in Newport, eating very fresh seafood. My only issue is that I deal with “road lust”, my desire and need to see and do everything there is in a new place. I’ll work on that, I’m sure we’ll be back again.

Monday we went down to the day use area so I would have a shorter walk to the beach. We got over the dune and then I watched Opa and Coda run and play. After that we took Coda along and went to Yaquina Head Outstanding Natural Area. We started out down at the quarry cove, and although we thought it was a scenic area, we were not amazed. We did not see many birds, no seals, and not much tidal pool life. So we hiked back up to the parking lot and headed towards the lighthouse. There was a pullout along the road and I suggested to Opa that it would be a good photo of the light house from there.

To our surprise, we stepped out of the beast, looked at the rocks and saw lots of seals and common murres on the rocks. Then we spoke to a park host walking by, who pointed out that there were eagles harassing the murres, causing them to abandon their nests and sit in the water. He also said that the eagles would pick up the eggs and smash them. And then we witnessed an eagle harassing them. Wow, so much drama! The park was getting ready to close, so we went back to our campground, and agreed that we needed to revisit this place.

I spent most of Tuesday morning with my leg up and iced. I also vacuumed because I had to. The sun was out, it was a bit warmer, and we planned to take advantage of the beach. It was sunny at the campsite and I was looking forward to sitting on a nice sunny beach and maybe getting a little tan. Got to the beach and NOPE, no sun and lots of wind. Opa and Coda went for their beach run and even Coda wanted to get out of the blowing sand from the wind. We tried to snuggle up to a sand dune for some protection from the wind and yet a little view of the ocean. We held out for about one hour before it just didn’t make sense to be that uncomfortable. I think I may not be able to get the sand out of my ears for many months to come! Time to go back to our home and play a game instead.

Our plan for Wednesday morning was to attend the bird walk along the estuary at the Hatfield Marine Science Center in Newport. It was a lovely estuary and I learned a little bit more about local birds. Then we went into the building which had fabulous displays. It was dense on information. As our guide had said, this center was educational in comparison to the Oregon Coast Aquarium, which is more entertainment. I’ll let you know later.

And another afternoon of walking the dog on the beach. When we got there and started our walk, the beach had an eery and mysterious look. I couldn’t always tell where the shoreline started or ended. You may or may not see someone walking a short distance in front of you. It was very interesting. By the time we were finished, much of the fog rolled away and it looked sunny and nice on the beach and shoreline but not out on the water. It was a fun time watching the fog!

Now for a day at the Newport Coast Aquarium. It was nice. Not spectacular. And very expensive, just shy of $20 an adult. Some of the exhibits were awesome, some just so-so. I loved the jellyfish and colorful fish. I learned more about the coastal birds and enjoyed watching them. There also was a shark tunnel, an otter exhibit, and seal and sea lion exhibits. We spent a few hours and went on our way.

Next, lunch at Local Ocean Seafoods in Newport. We had to wait about 35 minutes for a table but it was worth it. And we got lucky to have a seat at the sidewalk with an open air view of the marina. The food was great. We had dungeness crab cakes, roasted garlic and dungeness crab soup, tuna mignon, and grilled catch of the day (rockfish today) fish and chips. We split each of the dishes and enjoyed all of it.

Then, back to the Yaquina Head Outstanding Natural Area. We got to the visitor center and found that all of the lighthouse tours were already booked. So we started exploring the visitor center when an announcement came that a few spots on the next tour had opened up. I ran up to the desk and scarfed up the tickets and we hustled to the lighthouse. It was a good tour which took us up 114 steps up to the lens. After the tour, we looked at the common murres and seals again but it was so windy, I was happy to get going.

When we got back to the campground, we noticed how full and noisy it already was in advance of the upcoming holiday weekend. I was ready for a change and hoping it would be a quieter spot.