Warning: Parameter 2 to wp_hide_post_Public::query_posts_join() expected to be a reference, value given in /home/customer/www/annieandthebeast.com/public_html/wp-includes/class-wp-hook.php on line 307
 A Five-hundred Mile Detour to Crater Lake – Annie & The Beast
Skip to content

Early on in our planning, we debated whether or not to visit Crater Lake this trip. With some of our other timing, plus not wanting to arrive too early when the rim road might still be closed, the only thing that worked was to go after our time on the coast. Which basically meant traveling from the very top of Oregon almost all the way to the bottom. In the end, we decided to include Crater Lake as the last of our National Parks for this trip and just accept driving about 250 miles south, followed by another 250 miles back north.

Crater Lake is a collapsed volcano (Mt. Mazama) that filled with water from snowmelt over the last 7,700 years or so. Over time, it reached an equilibrium between the snow melt addition and the evaporation and seepage that occurs each year and is now the deepest lake in the USA at just under 2,000 feet deep. It is also amazingly clear, currently holding the record clarity measurement for any natural body of water in the world. That clarity also gives Crater Lake its deep blue color. 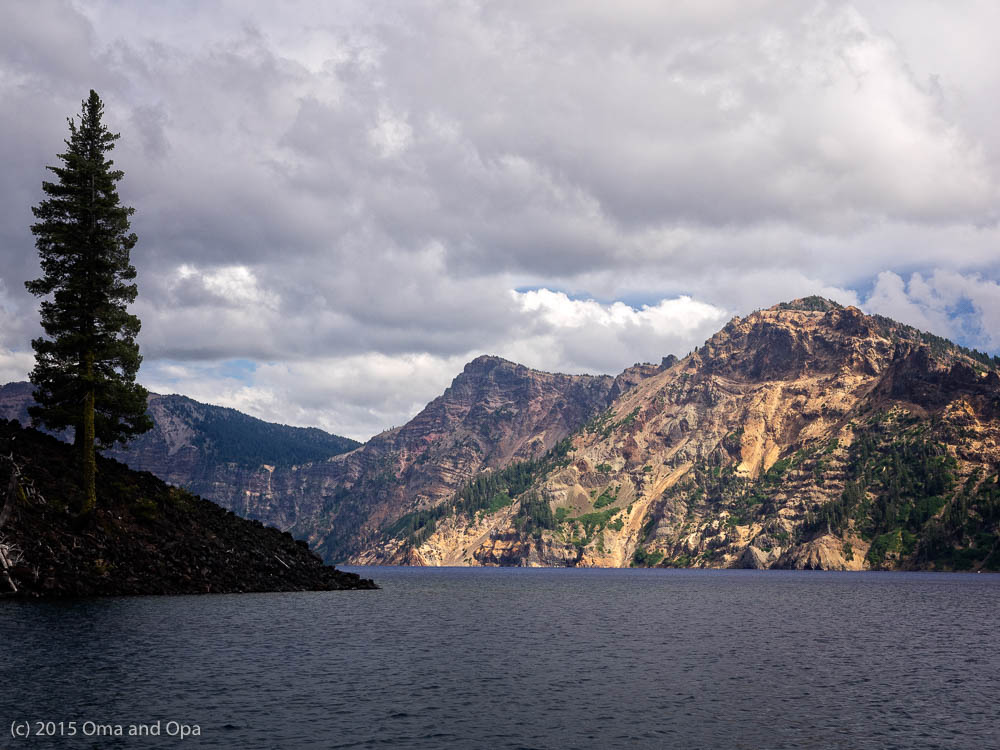 The trip down to Crater Lake was almost entirely two-lane highway and was generally scenic. We enjoyed snow-capped peaks, forested mountains and desert. We made it to Crater Lake around 5:30 pm, where we had reservations at the Crater Lake Mazama campground, necessary as the campground was full. No assigned sites and all sites had one of three colors: red (supposedly the largest sites), yellow and blue (theoretically tent sites). With a handful of exceptions, sites were dry camping only (no hookups).

The assignment between red, yellow and blue sites frequently made no sense to us. We saw blue sites that seemed bigger than some yellow sites. We saw yellow sites that seemed more suited to a large RV than some red sites. And it was all first-come, first-served – when we arrived, we were told to drive around every loop in the campground until we found an empty red site and just take it.

Through perhaps dumb luck and better perceptions than other campers, we ended up with a great site. Most sites, including ours, were pull-throughs; theoretically, you can park your trailer without backing. On our site, the locations of trees made it impossible to use the pull-through for any larger RV (probably why the site was still open), but it was an easy site to back into, which is what we did. After walking the dog through every loop in the campground, and seeing that many of the campsites were nearly on top of each other,  I think we had the most privacy of all the larger campsites.

We had two days in the park and spent the days driving around the rim and stopping at most of the overlooks. We did a short hike to the pinnacles and the longer hike down to the lake, a steep 700′ decent and ascent. With Oma’s knee, we did not do any other longer hikes.

We also took the boat that circles the lake, getting a completely different perspective. (The only (legal) access to the lake is to hike down the Cleetwood Cove trail, where the boat dock and a semi-official swimming area are.)

Even though there were enough clouds that we never got great early morning or evening light or a sunset, the views of the lake were beautiful from pretty much every location. We really enjoyed our last excursion before getting serious about heading home.