Warning: Parameter 2 to wp_hide_post_Public::query_posts_join() expected to be a reference, value given in /home/customer/www/annieandthebeast.com/public_html/wp-includes/class-wp-hook.php on line 308
 12% Grades and Twisty Mountain Roads – Annie & The Beast
Skip to content

The trip from Finger Lakes to Southeastern Pennsylvania was a bit longer than we prefer at 340 miles, but certainly doable. It was a mix of back roads and some interstate. In order to avoid low bridges and road weight limits, we try to stick to truck routes when towing the fifth-wheel, and that’s exactly what we did on this drive. I use Google, the Allstays app, and a truck atlas for guidance.

We’ve driven through the mountains in the west with no issues. Through either luck or good planning, we’ve never needed to take the trailer up or down a grade more than about 8%, something that is usually very manageable for Opa by downshifting into 3rd or 4th gear and using the brakes occasionally to fine tune our speed. He’s always felt comfortable on descents as long as he has relatively cool brakes (because the engine is keeping the truck/trailer at speed) and has a lower gear to shift into should the road get steeper on the way down.

The freeways so far have not been that different than western freeways in the mountains. Grades up to 6-7%, truck speed limits of 45 mph down the steepest grades. Nothing we hadn’t driven before and been comfortable with. 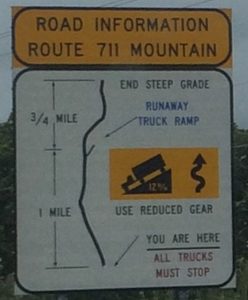 We’d had a long day of driving and it was getting late so during our last leg of the trip, I suggested a shorter route that was a truck route and there were no low bridges, but I didn’t think about steep grades. I figured that if the route was good for trucks, it would be good for us. Not good thinking. When we left the freeway for the last 40 miles of our trip to the campground, we embarked on a bit of an adventure. We didn’t see a lot of trucks on our truck route, but we did find grades. The worst one was three miles of downhill into Connellsville with a grade that peaked at 12%. That required first gear on the truck the whole way down and Opa still used the brakes when approaching the 20-25 mph curves (which were more like 15 mph curves for us). Out west, we had never needed to shift the truck below second gear for a descent.

The back road down into the campground was even steeper, narrower and curvier than our truck route. For that one, we went down in first gear and Opa rode the brakes the entire way down. Fortunately, that hill was less than a mile.

The experience was a little bit more exciting than we had expected when we left that morning, but other than some extra brake wear, it was all fine in the end. For the rest of the trip, we are going to try sticking mostly to US highways and interstates and will be more cautious of state routes through the mountains (even if they are truck routes). Hopefully with a little luck and more cautious planning, we can mostly stick to single digit grades with the fifth-wheel.