Warning: Parameter 2 to wp_hide_post_Public::query_posts_join() expected to be a reference, value given in /home/customer/www/annieandthebeast.com/public_html/wp-includes/class-wp-hook.php on line 307
 Whitehorse (Alaska Highway miles 762-870) – June 2018 – Annie & The Beast
Skip to content

From Teslin, it was off to the big city. Whitehorse is the capital of the Yukon Territory and home to about two-thirds of its population. With the Yukon having less than 40,000 people, Whitehorse’s population of around 25,000 is only large in a comparative sense.

We stayed a couple of miles from downtown at Hi Country RV Park. We called in the morning before we left Teslin and managed to get their last 30A electrical site, which was narrow but had a nice backyard. (Behind our RV was just woods for as far as you could see.) It had a cafe, which we did not check out, and a lovely gift shop, along with snacks, drinks and ice cream. It also had a decent laundry room, dump stations and even a reasonably priced rv wash area. 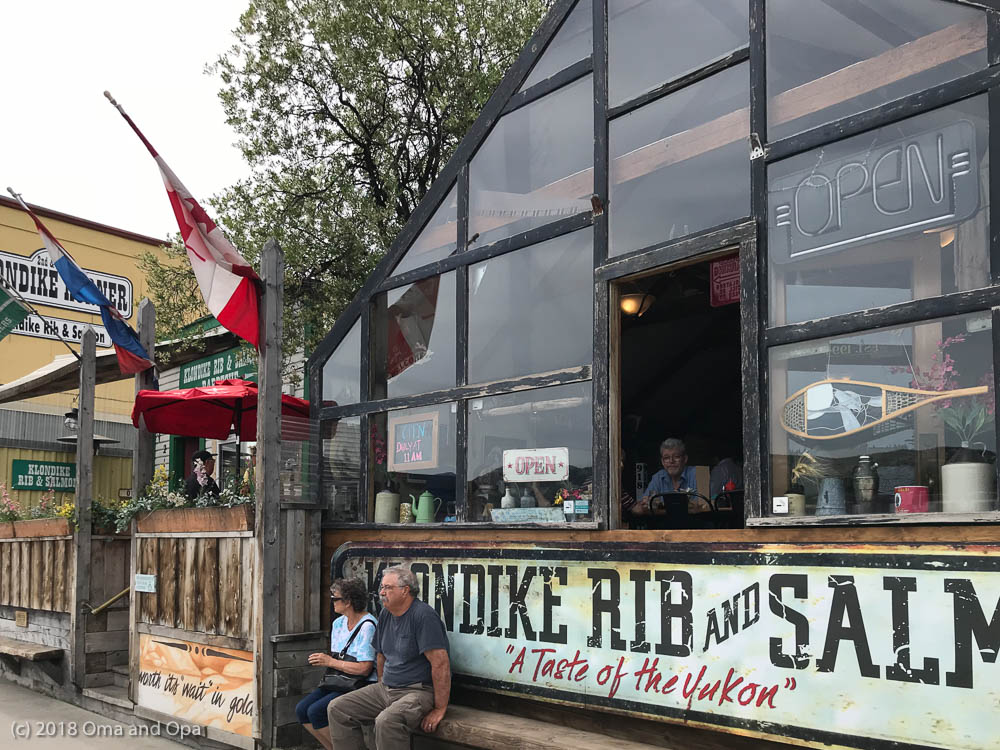 Hi Country was conveniently located on a bus line, so we left the animals in the motorhome and hopped the bus into downtown. We had a fantastic lunch at Klondike Ribs and Salmon, where the haddock fish fry was excellent. The ambiance was warm, friendly and fun. Tables were shared which contributed to fun conversation with new people. We got to sit with two retired police officers from Toronto. Great food, great conversation, who could ask for more?

After lunch, we headed to the McBride Museum of the Yukon. Although it was being renovated, it had a number of nice display areas to browse. They had a great room full of Yukon animals, artifacts from notable Yukon establishments, a nice Alaska Highway exhibit and a few other things.

From the museum, we strolled along the Yukon river and through town, stopping by the old White Pass and Yukon train depot, the visitor center, and the SS Klondike, now a National Historic Site administered by Canada Parks.

The Klondike was a wood-fired steam stern-wheeler, one of many that provided transportation between Whitehorse and Dawson City (home of the 1898 gold rush). Whitehorse was served by train (from Skagway) and eventually road (after completion of the Alaska Highway), but until the Klondike Highway was built around 1950, the primary way to transport goods and people was on sternwheelers that traveled the Yukon River. The ships ran only in the summer, since the river is frozen the rest of the year.

There is an interesting video (probably 15-20 minutes in length), and entry onto the ship is free. The park offers guided tours a couple of times during the day, or you can purchase a self-guided tour brochure for $2.00. We had missed the guided tours, and chose the latter. A few areas were closed for maintenance, but it was interesting to see this history and realize that these ships had been the primary link with Dawson City nearly until we were born.

Whitehorse has several other museums, but nothing that we had read or heard inspired us to spend more money and time in them. It seems that every town has a museum or two, and even skipping a number of them, we’re just not that into museums enough to want to check out all of them.

One thing that we had wanted to do was catch the Frantic Follies Vaudeville Revue, which was recommended to us. Unfortunately, they have closed the show after losing tour group business. Although there are limits to how much touristy stuff we can handle, this seemed like it could have been very fun local entertainment.

We spent our last morning in Whitehorse removing a few layers of bugs from the motorhome, hitting Walmart and a grocery store (where Oma snagged a free cake somehow), and filled up with fuel and propane. Then we bid farewell to the Alaska Highway and headed up to the Klondike.