Warning: Parameter 2 to wp_hide_post_Public::query_posts_join() expected to be a reference, value given in /home/customer/www/annieandthebeast.com/public_html/wp-includes/class-wp-hook.php on line 307
 Volcanoes and More – Annie & The Beast
Skip to content 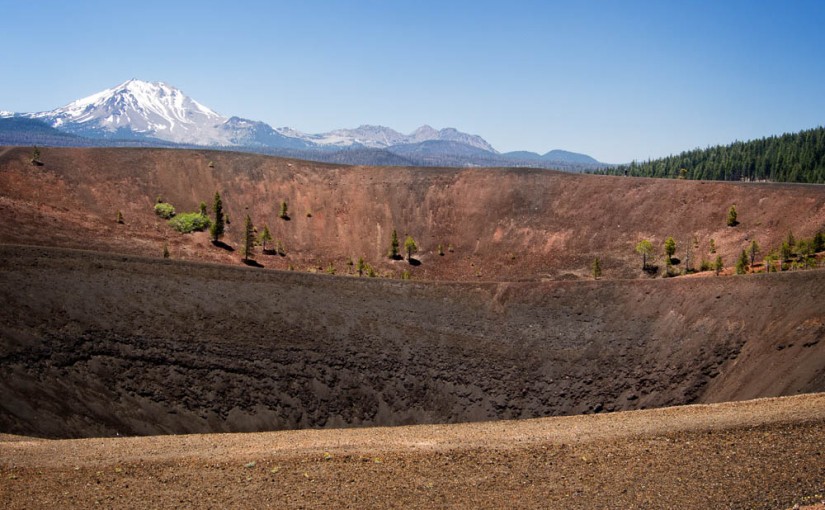 After leaving Yosemite, we headed out to visit Lassen Volcanic National Park in northeastern California. It is a part of the Cascade Mountain Range and the area around Lassen Peak is still active with boiling mud pots, stinking fumaroles, and churning hot springs. Lassen Peak’s last eruptions were between 1914 -1917. Actually, that’s not too long ago. It certainly gives you a perspective thinking about that. The park is also one of the few areas in the world where all four types of volcano can be found (plug dome, shield, cinder cone, and strata). Lassen is a plug dome.

We spent our first day exploring the park, driving the auto tour, walking some of the short interpretive trails, and stopping in at the visitors center. There was still some snow on Lassen Peak and other nearby peaks making them beautiful sights especially when mirrored in the crystal blue lakes. In fact there was still some snow next to the roads, parking lots, and on the trails.

We were treated to beautiful scenery for our lunch stop on a crystal clear mountain lake surrounded by rock and emerald trees. It is amazing to see how much new plant life and trees are emerging from the harsh lava rock blanket of only 100 years ago. All of the rock you see is volcanic.

The next day, we set out to hike the Bumpass Hell trail. This was a moderately strenuous trail with loose rock, some elevation change and snow patches on the trail making it slippery. The reward, however, besides viewing the beautiful scenery of mountain peaks and valleys, is getting down to the basin to explore the steaming pools, stinky boiling mudpots, and array of unusual colors, with a beautiful azure lake at the end. But you must stay on the boardwalk to avoid falling through the thin crust and getting severely burned! We were also treated to seeing a deer stroll through the meadow above one of the beautiful little blue lakes at the end of the trail. All in all, it was a very enjoyable trail!

On our last day, we chose to hike the Cinder Cone Volcano. Now that was a difficult trail! It’s a 4 mile hike but, from the base of the volcano to it’s top, it’s an 846 ft. elevation gain. For every step you take, you slide back a half step on the cinders. It’s really worse than sand. It killed my knees and feet.

But for as horrible as the climb was, the view from the top was simply spectacular! In the distance was beautiful Lassen Peak and some other snow capped mountain peaks. Around the base and extending out was the colorful Painted Dunes, Snag Lake, and the Fantastic Lava Beds. And then Opa took the trail down into the center of the volcano. He looked like a small dot going down. I stayed on the top and took pictures to witness the event. Then we had to get back down the volcano. It was scary but it was much, much quicker than going up! We did it! I will never do that again, but I did it once and it was spectacular!