Warning: Parameter 2 to wp_hide_post_Public::query_posts_join() expected to be a reference, value given in /home/customer/www/annieandthebeast.com/public_html/wp-includes/class-wp-hook.php on line 307
 Top of the World Highway – June 2018 – Annie & The Beast
Skip to content 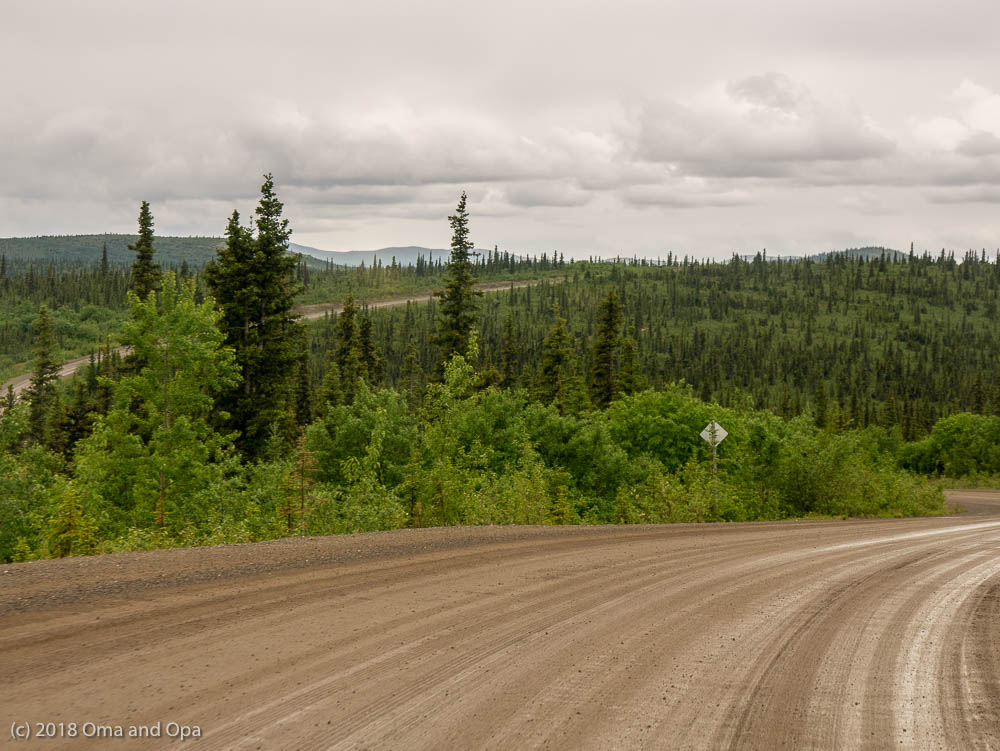 The highway is so named because, along much of its length, it skirts the crest of the hills, giving looks down on the valleys. It is also one of the most northerly highways in the world at those latitudes.  – Wikapedia 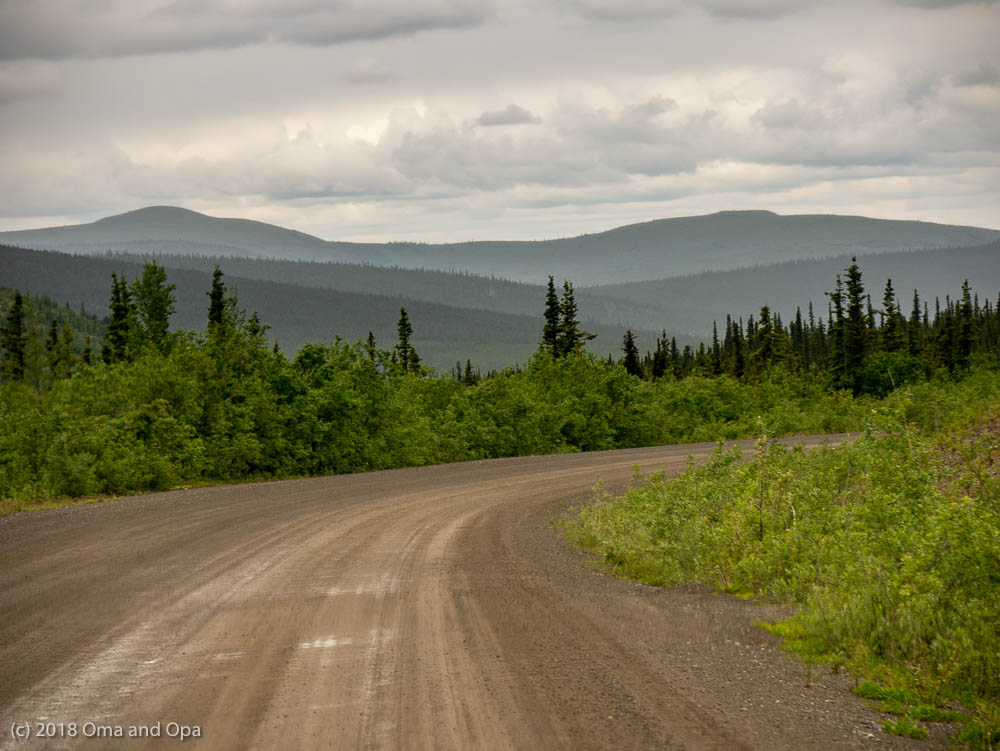 I remember when my parents drove to Alaska in the early 90’s and they came home with wonderful tales to tell accompanied by pictures. I could hardly contain my excitement and kept hoping for my day to come. It finally has and we drove the “Top Of The World Highway” like my parents did so many years ago. 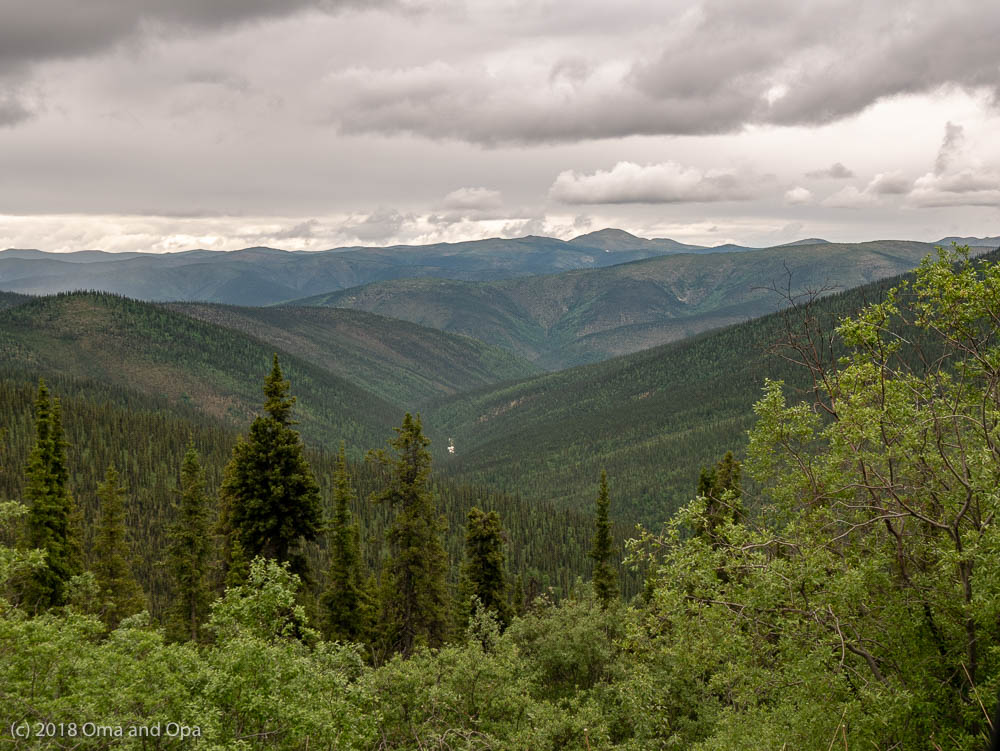 The Highway begins with a ferry ride across the Yukon River and then climbs into the mountains. Not long afterwards, the pavement ends and you are driving along on gravel and dirt. The views are fantastic and I don’t believe pictures can do it justice. 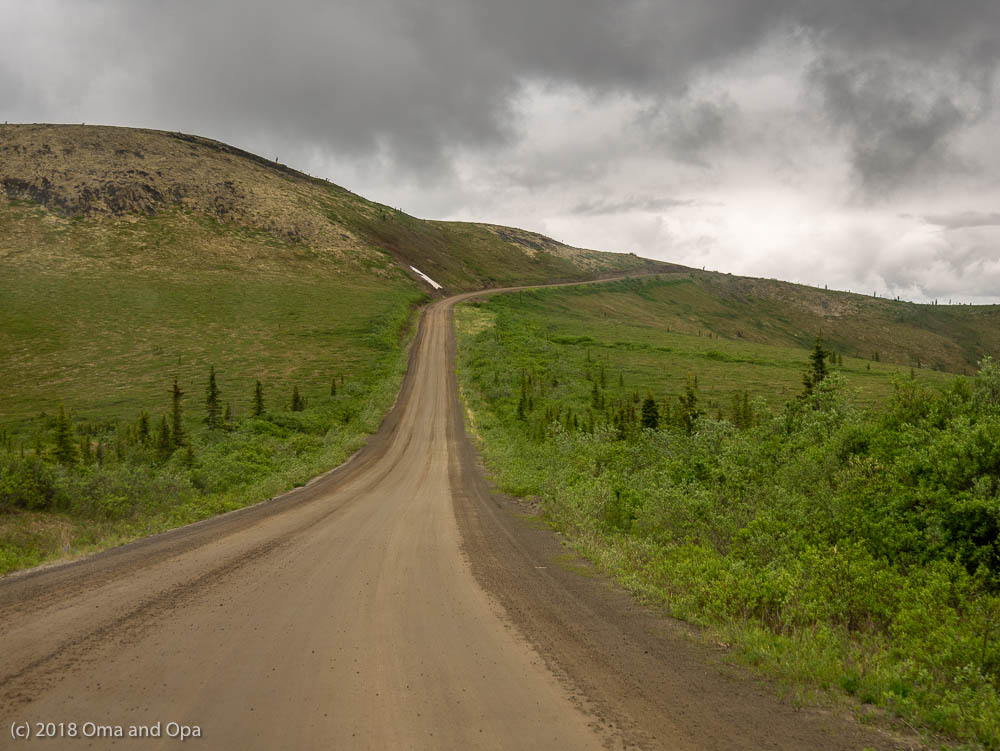 But don’t forget that while you are driving on the crests of these tall hills, it means that there are many steep drop offs and often no shoulders. You can’t make mistakes driving. And there are no shortages of potholes, frost heaves and washboard roads. Our average driving speed was about 35 mph. And it was a light rain and into the clouds for much of the way. 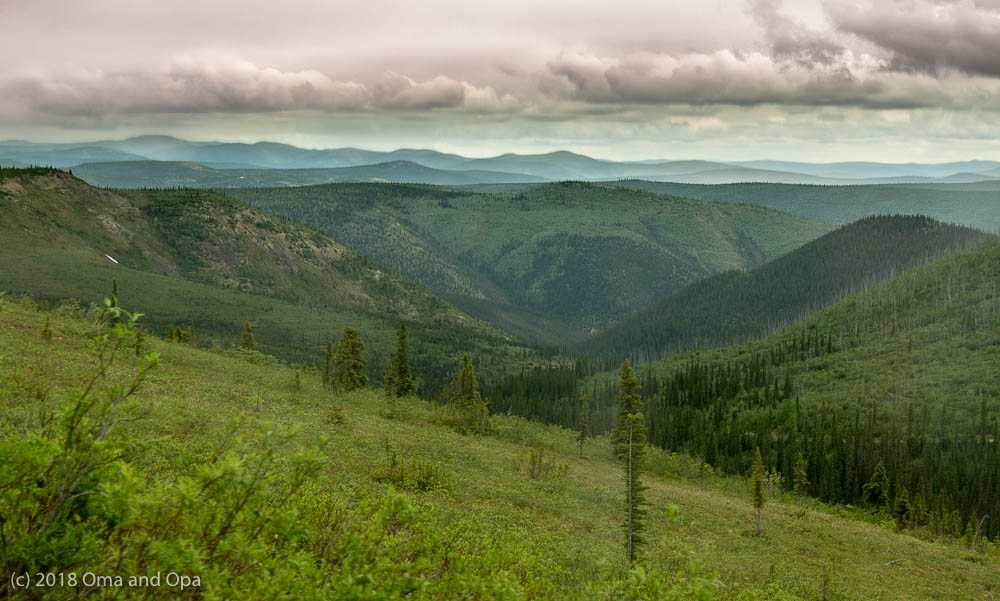 After a couple of hours, we finally arrived at the border crossing. The Poker Creek–Little Gold Creek Border Crossing is on the Top of the World Highway, which connects the communities of Tok, Alaska and Dawson, Yukon on the Canada–United States border. This crossing is the northernmost international border crossing in North America, as well as the one at the highest elevation: 1,258 m (4,127 ft). 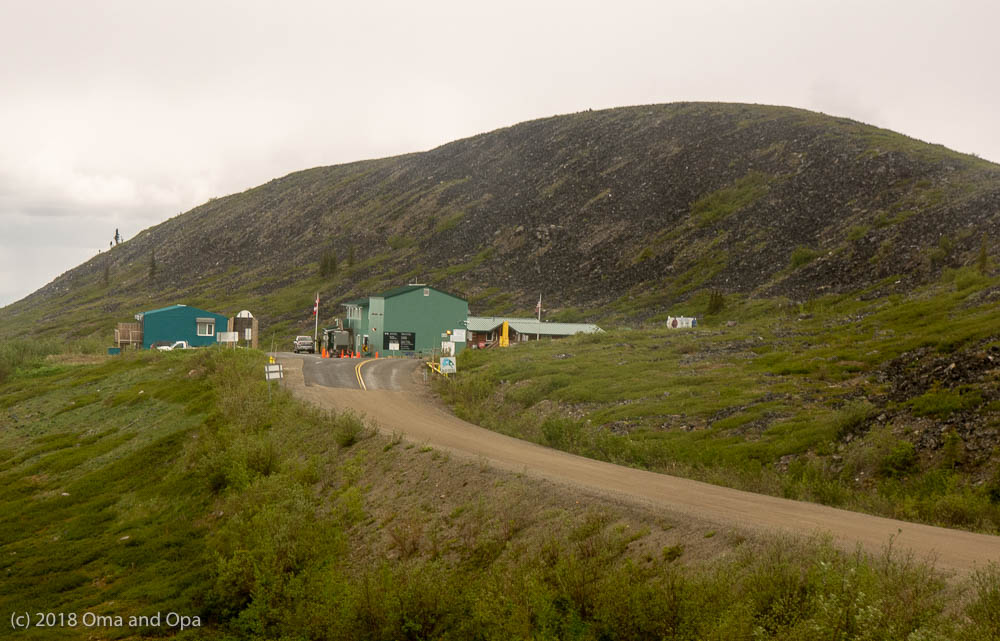 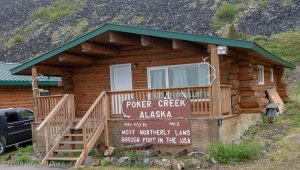 There was only one car there when we got there on Monday. We handed the border control agent our passports and he asked tons of questions about goods that we acquired in Canada, and of course foods. He asked about citrus and asked to see the lemon we had. Well we still had an old lemon from the U.S., so after he saw the U.S. sticker on it, he let us go.

After the border crossing, the Top of the World Highway eventually turns into the Taylor Highway in Alaska. The Alaska side of the border is not nearly as scenic and, after a short segment of beautiful pavement, the highway became much worse. We were now averaging about 25 mph driving. We even came upon a large broken down motorhome in the middle of the road about 15 miles from Chicken. We looked to see if anyone needed assistance but there was no one around. Later, after we arrived in Chicken, we heard people talking that they were waiting for a tow which would take at least another two days to arrive. I hope that all ended well enough.

Be prepared to know that you will come off this highway filthier than you could ever imagine getting. But that’s part of the adventure, right? 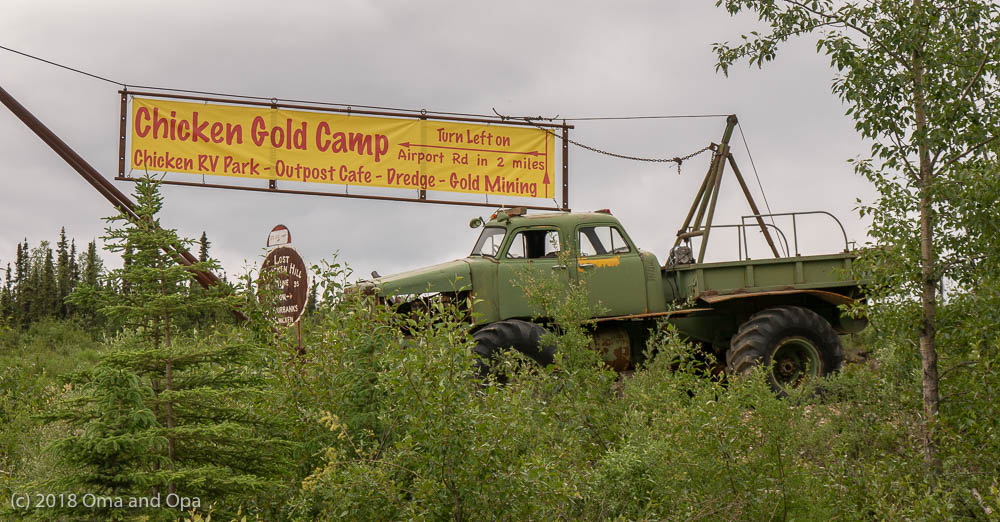 Finally, we arrived at Chicken, Alaska. Chicken was founded in the 1890s by prospectors mining for gold on the nearby Fortymile River. Story has it that the settlers survived their harsh first winter by eating ptarmigan, a local grouse that’s now the Alaska state bird. So the grateful townsfolk decided to call their new home Ptarmigan but they weren’t great spellers and decided to name it Chicken instead because everyone could spell that correctly. Chicken was a boomtown, the second incorporated town in Alaska. Population then was over 400 and now is about 7. It has a very interesting history and is a fun town now to visit.

We chose to stop and stay overnight there as it was a long enough drive. We toured the gift shops at the two rv parks, and took pictures of all the welcoming chickens. Then we headed over across the street to downtown Chicken. Downtown consisted of 4 buildings. Another gift shop, a liquor store, a saloon, and the Chicken Creek Cafe. We enjoyed tasty chicken pot pies for dinner, and took along a gigantic cinnamon roll for breakfast. They offer free camping next to the cafe and we took advantage of it. It wasn’t a pretty place to “camp”, but they offered a picnic table. No services available and a very rutty parking area. Unfortunately, they run a generator all night for their power since the town as no electricity, so it was a little noisy but otherwise it worked as a free and safe place to park for the night.