Warning: Parameter 2 to wp_hide_post_Public::query_posts_join() expected to be a reference, value given in /home/customer/www/annieandthebeast.com/public_html/wp-includes/class-wp-hook.php on line 307
 The Columbia River Gorge – Annie & The Beast
Skip to content

Although in many ways we began our trip home when we left the coast, we had two final “destinations” before we got serious about moving east. The first was the Columbia River Gorge.

After leaving the coast, we detoured into Portland to get our brake actuator replaced. Fortunately, it never repeated its “always on” state after I disconnected and reconnected it back on the coast, but the manufacturer recommended replacing it under warranty and with a 17,000 lb. trailer wandering through mountains, solid brakes are really important to us. Curtis RV, a large RV operation, was recommended by the manufacturer. It was very hectic and pretty tight quarters with a lot of RVs moving in and out, but they took care of getting the actuator swapped out and getting the brakes back in business. It’s maybe a little soon to pass final judgement, but so far we were happy with the work they did.

We left Portland around 5:00 (rush hour!), and after a very slow drive out of the city, we arrived at our home for three nights: Ainsworth State Park. Ainsworth had full hookups (clean sheets and clothes!) and was a good place to check out many of the waterfalls along the Columbia Gorge. Which is what we did on one of our two days. It was the weekend, and it was busy. Even leaving early in the morning, parking lots were nearly full. We also passed a couple of parked cars with busted windows – I don’t know if they left something tempting in sight or just had bad luck, but I’m glad we didn’t have to deal with that. We didn’t check out every waterfall, but we did walk several trails, saw a number of waterfalls and basically got our fill before heading home in the early afternoon as the temperature climbed into the 90s.

The other day was a long day as we backtracked somewhat. We had wanted to experience a day of wine tasting in Oregon’s Pinot Country. We had an unbooked weekend while we were supposed to be on the northern coast that I thought we might use for that, but our brake issues derailed that idea. Ainsworth State Park was a good 90 minutes each way from the heart of the Willamette Valley wineries, but it was doable and as close as we were going to be on our trip. So off we went.

With hundreds of wineries in the area, and not a lot of experience with Oregon wineries, we basically picked an area near Dundee at random and checked out several wineries that were clustered close together. The first tasting was at a beautiful winery and had good wine, but with the prices of the three wines we tasted running $60-125 per bottle, it ought to be good wine. Suffice to say that we were not so blown away that we felt a need to buy any bottles, although we certainly enjoyed the tasting.

After a break for lunch, the second winery was less upscale, with the tasting room basically located in a barn-like structure. I was hopeful that a simpler tasting room might translate into good but reasonably priced wines. I was disappointed. While I thought that the wines were okay, prices started at about $45 per bottle and up (hardly cheap) and nothing we tasted there inspired us to spend that kind of money.

The day was winding down, so we went next door to Vista Hills Vineyard & Winery, our last Willamette winery of the day. This one had a nice outdoor tasting area. Instead of doing the tastings at a bar (most common), the tastings were handled as table service. We sat outside on a raised deck, shaded by trees, that looked over the vineyards and enjoyed a leisurely hour-long tasting. Even better, we really enjoyed most of the wines, and prices were much more reasonable as well. We closed the place, and it was a great way to end our day.

From Ainsworth, we moved about an hour up the Gorge to Memaloose State Park, where we had a dry camping site (no hookups) that overlooked the Columbia River. Although Memaloose does have full-hookup campsites, most of those are away from the water, and we wanted a water view. My only concern was that normal high temperatures for the area are in the upper 80s, and without hookups the only way to run the air conditioning would be to also run the generator, something we did not want to do.

On the day we moved to Memaloose, my worst fears were realized. Temperatures were triple digits.

We delayed our departure from Ainsworth as long as we could and cooled the trailer down as far as we could (which was still only the low 70s). When we arrived, we sat in the shade, appreciated the breeze and suffered through the evening. The next day was much cooler, with highs only around 90. And the rest of the week saw highs only in the 80s. With the constant wind (this area is the wind/kite surfing capital of Oregon, with wind speed consistently in the teens and gusts to 30 mph every day we were there), it was very pleasant and except for that first evening, we never missed having air conditioning.

It was a very nice site at another quiet state park (except for the occasional train – more on that later). With the pleasant weather and lovely gorge views, I could have relaxed here for a couple of weeks. And we took advantage of that on a couple of days with several hours in the afternoon, chilling with a beverage and a book.

It wasn’t all chilling. We did an all-day trip around Mt. Hood. We didn’t tackle any long hikes, but we did several stops including the Timberline Lodge, constructed by the WPA during the Great Depression. It is a beautiful, rustic hotel (similar to the great national park lodges) in a beautiful location. It is also known for being used as the exterior of the Overlook Hotel in the movie The Shining. This was a nice drive, although not quite as stunning as we expected. 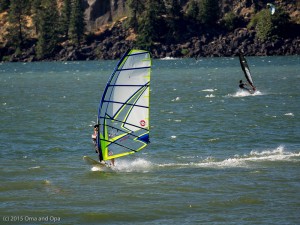 We spent time on the beach watching the kite surfers and wind surfers on the Columbia River. Hood River (the city) is something of a sports mecca, and national competitions are held there. Nothing official was going on when we were there, but we enjoyed being able to sit along the banks of the Columbia and watch all the people out on the river with their boards. It seemed like an appropriately summer thing to do.

We also wandered along the Washington side of the gorge. Bridges in this area are all toll. The Hood River Bridge that we used is also extremely narrow with 9’4″ lanes. The Beast is basically 8′ wide not counting the mirrors, so crossing was a little nerve wracking with inches between the truck and the guardrail on one side and inches between the truck and oncoming trucks on the other side.

While on the Washington side, we climbed Beacon Rock. This is an 858′ tall basalt monolith. Some crazy guy (Henry Biddle) purchased it in 1915 for the purpose of constructing a trail to the top. It took him three years and the trail has over fifty bridges and switchbacks. It’s now part of the Washington State Parks. There are great views of the Columbia Gorge as you climb and descend the rock, although the view from the top was blocked by vegetation in many directions.

We found time to spend a lovely couple of hours at a local winery that focused on Italian-style wines. This winery also had table service for the tasting, and we followed the tasting by relaxing with a couple of glasses of wine and a plate of antipasti. Life is good.

The trains along the gorge also entertained me. The Union Pacific tracks were right behind our campsite, along the river, and we had a nice view of the trains that went by. Trains were intermittent. Sometimes we’d get four in an hour; other times the line was nearly dead. Burlington Northern Santa Fe was on the other side of the river and actually seemed to run more trains, but the river is wide enough that those trains were pretty far away.

On two occasions I went down to the UP tracks to try some train photography, but my luck was bad and almost no trains came through while I was down there. And while I was close to our campsite, just slightly lower down, the acoustics were such that I didn’t hear the few trains that did go by until seconds beforehand. (There are no crossings nearby, so no train horns; good for sleeping, not so good for hearing trains coming.) So no good train pictures. Oma tried to help, and managed an interesting self portrait.

Other than our first afternoon/evening when we had well-above-average temperatures, we really enjoyed our stay. Bottom line – this is another park I’d be happy to come back to and hang out in.