Warning: Parameter 2 to wp_hide_post_Public::query_posts_join() expected to be a reference, value given in /home/customer/www/annieandthebeast.com/public_html/wp-includes/class-wp-hook.php on line 307
 Sequoias – Annie & The Beast
Skip to content

As we were staying near civilization for the first time since Texas, we had some chores to take care of. Most important was replacing my phone, which had taken an unplanned swim and did not survive. There was a Verizon store only 40 minutes away, so we did some chores in the morning and then headed into town.

First stop was a fruit market to get some fresh fruit. It seemed a little pricy, but we did get a few items including a nice bag of oranges. Then off to Verizon, where there was a wait to get helped, but after getting a sales guy, my new phone was working in no time. And it appears that this time he did not hose my plan. (When I switched my iPad from month-to-month to our shared plan last year, the Verizon sales guy at home totally messed up my plan, which took a month to get fixed. And these were both actual Verizon stores, not resellers.)

Then off to Costco for groceries. Costco with the trailer is a little bit of a challenge. For things we use a lot of, Costco quantities are fine. For many other things, the quantities are way too much. But sometimes there are hard decisions. When the 24-pack of beer costs about the same as two six-packs in the local grocery stores, do you try to find room or just pay twice as much? In my case, I passed on the beer, and then couldn’t bring myself to buy any later at the crazy California grocery store prices. So in the end, I guess I saved money and space.

Finally, off to the Sequoias. We were staying near the southern entrance to the park, and the park recommends no vehicles longer than 22′. Fortunately, at 21′ 11″, we were under that by a full … inch. We saw a few larger vehicles, but the road is very curvy and even we used part of the oncoming traffic lane on many curves. Although it is a scenic drive, it did take over an hour one-way (at 15-25 mph) to reach the first major grove of sequoias, the Giant Forest region.

We had a nice walk on the Big Trees Trail. Rumor has it there are sequoias on that trail, but all of our pictures seem to be of a mother black bear and her three cubs. There was also a fifth bear in the meadow, but he was both farther away and did not have the cute factor of the three bear cubs.

The bears were clearly habituated to humans, although a cub did briefly charge someone who got too close. As usual, parents allowed their kids to get way too close (IMO), and I seemed to be the one keeping people back. (Every time I’d suggest that Oma move back and give the bears room, everyone moved back.) All that said, Oma and I were still no more than 25 yards from the bears and we probably spent an hour observing and photographing them.

After we finally decided to move on, we headed up the road a short distance to the General Sherman tree trail. We had planned on walking the entire Congress trail (only 2-3 miles) after that, but our dawdling with the bears cut our time short and we only ended up with time to walk half of it.

It was a great day. The crowd level was manageable (far from empty, but not overwhelming). It was great to see the sequoias, although the bears were definitely the highlight.

We decided to head back to the Giant Forest area and make a loop of the Moro Rock trail and the Soldier’s trail. The description did not seem too bad, about five miles of trail and the only significant mention of elevation gain was the climb up Moro Rock.

The Moro Rock trail was very enjoyable. We had the trail mostly to ourselves, and while there were not tons of sequoias, it was a beautiful forest area. There was not too much up and down, at least until you made it to Moro Rock. The rock was a pretty good climb (300 ft), but well worth the views from the top. 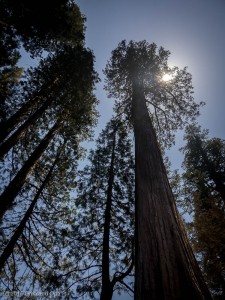 For some reason, the trail descriptions don’t mention that the other half of the loop, Soldier’s trail, crosses several ridges. So the trail that lists 300′ of total elevation gain (which is just the climb to the top of Moro Rock) actually ended up with closer to 1000′ of elevation gain. We really enjoyed the trail, though, and while I won’t say that climbing 1000′ at elevation is easy for us yet, we did okay. We also got to see bear #6, although to our relief it moved off of the trail away from us as soon as it saw us.

I loved the bears and the peaceful walks in the sequoia forests, and hope that we can come back and spend more time in a park that we barely scratched the surface of.