Warning: Parameter 2 to wp_hide_post_Public::query_posts_join() expected to be a reference, value given in /home/customer/www/annieandthebeast.com/public_html/wp-includes/class-wp-hook.php on line 307
 Meet Annabelle – Annie & The Beast
Skip to content 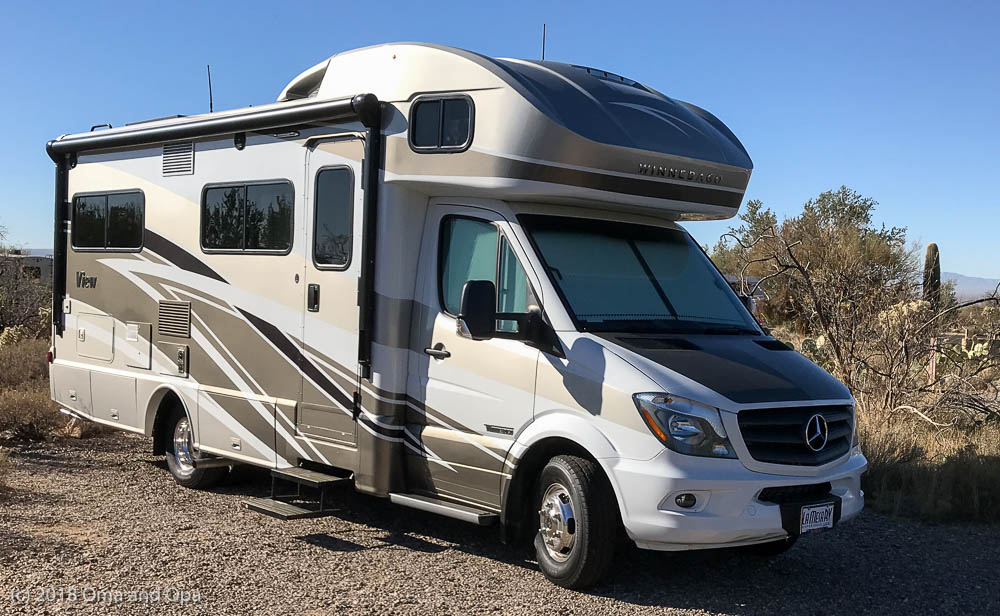 So there we were in Tucson, checking out various class C motorhomes on a random dealer’s lot, when we stumbled across Annabelle….

(Annabelle got her name because she is a compromise between Annie (the fifth-wheel) and Belle (the truck camper), with additional characteristics all her own. A friend suggested we name her Goldilocks as being “just right” between Annie and Belle, but Annabelle the motorhome just doesn’t have golden locks (or golden anything).)

We looked at mid-sized gas class C’s, but all manufacturers clearly focused on price over quality. And it wasn’t clear that the floorplans and sizes were an improvement on the smaller class A’s that we’d looked at. We’d looked at nice Mercedes Sprinter-based models that were under 1,000 lbs. of capacity dry (Leisure Vans, Tiffin). These were automatically out because that’s just not enough cargo capacity. But we did find a Winnebago View that we liked.

The View 24J model has much more floor space than the truck camper, so the dog has more room and we don’t have to constantly try to jump over him. The bathroom is larger. The dinette is large and has leg extensions so that we can comfortably lie back with our legs up. (Not quite as comfortable as true recliners, but not bad.) The driver’s and passenger’s seats swivel to become part of the living area. And there is sleeping room for 5-6 inside, so all of the grandkids would fit. It’s also about 6″ narrower, a foot lower and a smidgen shorter than the truck camper, which will allow us to fit into even more places. Ours has about 1,000 lbs. of cargo capacity remaining with a full load of fresh water, propane and diesel, enough for the four of us and a moderate amount of food and gear. The only real negatives compared to the truck camper are cost, ground clearance (although the foot lower height offsets that) and a slightly smaller refrigerator.

However, Annabelle had been sitting on the dealer’s lot for a while. She had the options that we wanted and only one or two that we didn’t care about. And critically, they were willing to let her go for thousands less than we could order or buy a similar one for. (We called dealers across the country and also checked into ordering a similar unit.) In the end, we decided that the money in our pocket was worth the pain of dealing with two RVs this winter.