Warning: Parameter 2 to wp_hide_post_Public::query_posts_join() expected to be a reference, value given in /home/customer/www/annieandthebeast.com/public_html/wp-includes/class-wp-hook.php on line 307
 Into Canada and a Stop at Writing-on-Stone – May 2018 – Annie & The Beast
Skip to content 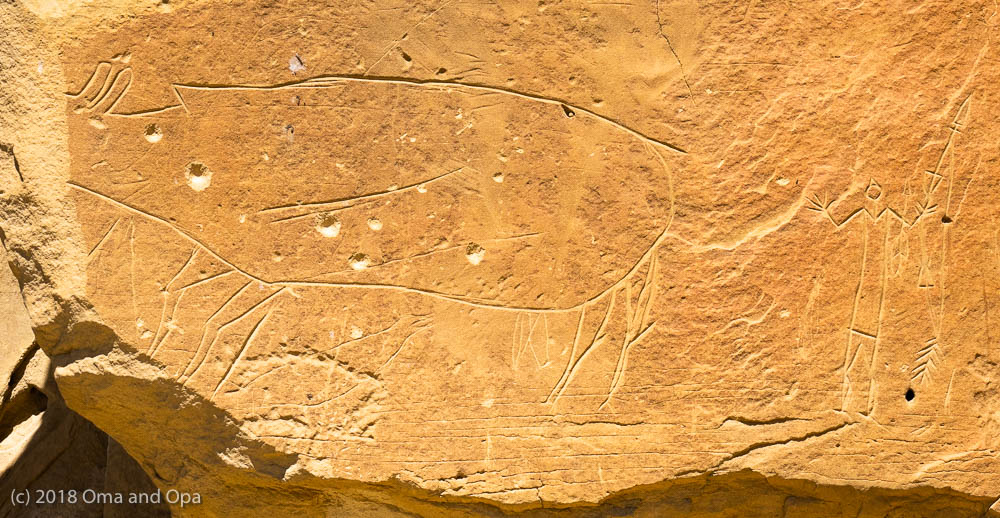 Traffic was light heading north, and we were afraid the Canadians at the border would have too much time on their hands and want to do a thorough search. Not that we had anything to hide, but it’s pretty inconvenient and usually kills 30-60 minutes. Instead, they had only one lane open for cars and RVs, and we had the bad timing to arrive when there was a modest line. Still, the wait was only about 20 minutes. We zipped through with only the usual “where are you going” and “how long will you be in Canada” questions, followed by “do you have any weapons” and “how much alcohol do you have?” No questions about animals or food.

We had checked before we left and saw that Google claimed there was a bank in Coutts, just on the other side of the border. For the record, there isn’t. We decided to continue to Milk River, about 15 miles from the border. There we found a bank, but of course my ATM card was not compatible with their networks. Fortunately, I had U.S. cash and the bank’s exchange rate was very reasonable, so we were able to exchange enough cash to last us until we hit up an ATM machine again, probably in Banff.

From the bank it was a pleasant half-hour drive through the Alberta plains to Writing-on-Stone Provincial Park. After checking availability of the petroglyph tour the next day, we picked out a campsite and relaxed for the evening. 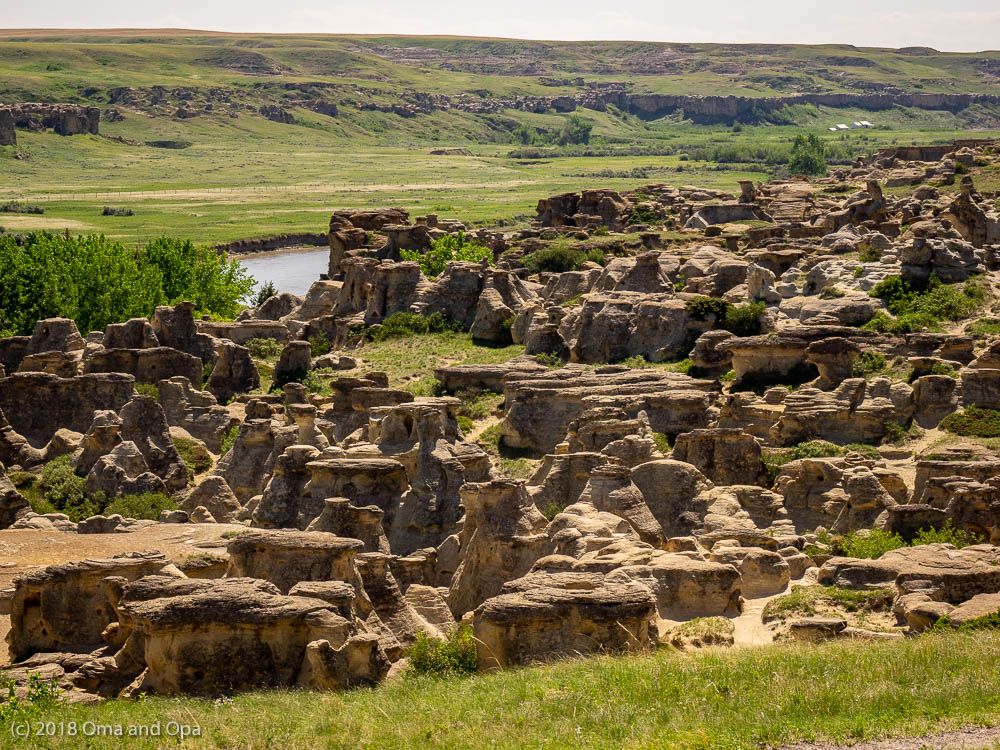 The park is located along the Milk River. The river has carved a decent sized valley in the plains, and left hoodoo cliffs along the walls of the shallow canyon. The visitor center sits above the cliffs, and the campground is located below the cliffs between the hoodoos and the river. 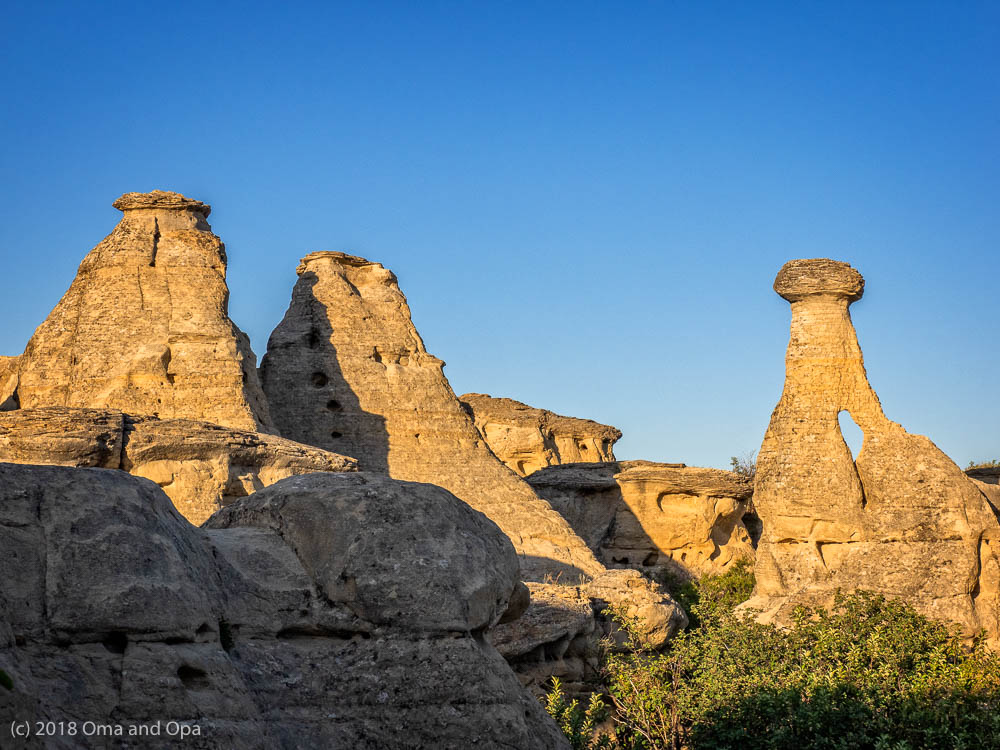 The campground is nice. The majority of the sites have 30A electric. There aren’t really any sites right along the river, although some have views. Based on availability when we arrived, we chose a site close to the hoodoo cliffs away from the river. Spacing between sites varies but overall is fairly typical for a public campground. Although there are many trees and some brush, you will see your neighbors out at least some of your windows.

The following morning was our first laid back morning in two weeks. We got a few chores done, but most of our time was spent relaxing around the campsite. After lunch, we walked up the hill to the visitor center to do the petroglyph tour. 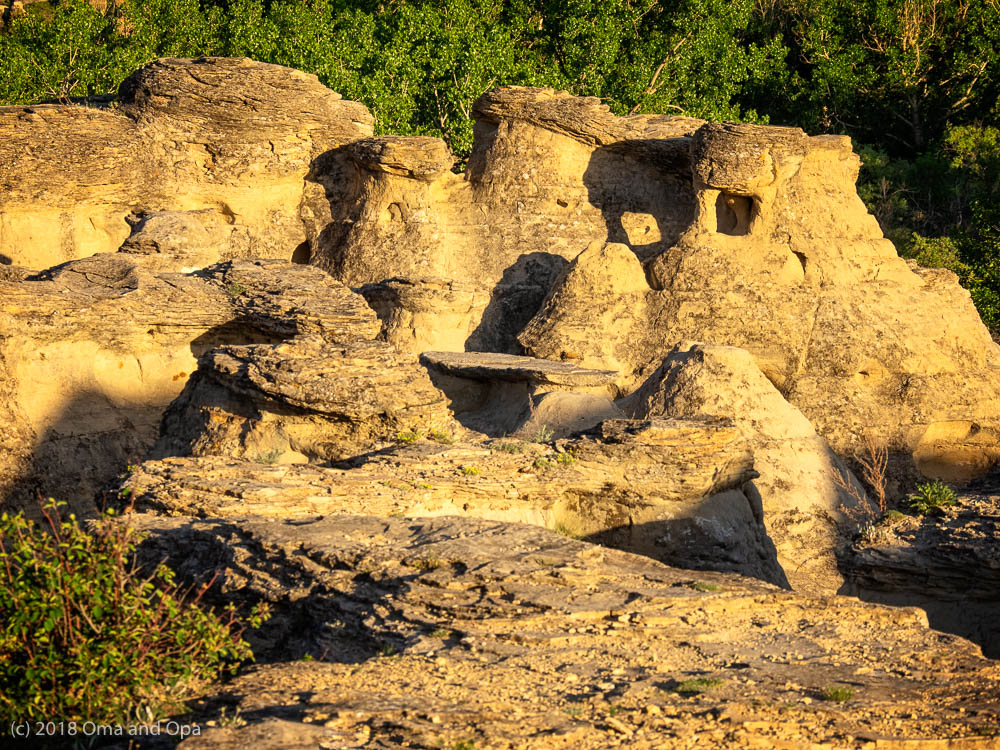 Native Americans (“First Nations” people up here) have carved petroglyphs in the cliffs along this area for thousands of years. There is no way to precicely date the oldest petroglyphs, but the practice continued into more recent history. Since guns and horses did not appear in the area until the 18th century, rock art depicting horses and guns is easiest to date. The latest native american rock art (as opposed to graffiti) is believed to have occurred in the first half of the 20th century.

Much of the rock art is in a protected area that is off-limits without a guide. The tour consists of a short bus ride into the protected area and then about 90 minutes of easy walking along the cliff. Our guide was extremely knowledgeable and covered the rock art as well as some geology and area history. It was well worth the time and cost (about US$15 per person).

Not every petroglyph is in the protected area. The Hoodoo trail passes by several areas of petroglyphs. We had planned to walk the roughly four mile round-trip the morning we left. However, it started raining and instead we decided to just drive to a viewpoint on our way out and walk to the most famous of the petroglyphs along the trail, the battle scene. That walk was only about 1.25 miles round-trip. By the time we finished it, the clouds were clearing and it was turning into a beautiful day to move on to our next destination.

Miles: 161*
Driving time: 3:45 (including the wait at the border)
Roads: Freeway, then back roads
Overnight: Writing-on-Stone Provincial Park
Weather: Mostly sunny and warm (61°/92°)
Total miles since crossing Canadian border: 42*
Total miles: 1610*
* Since our motorhome is our only vehicle, mileage includes side trips.