Warning: Parameter 2 to wp_hide_post_Public::query_posts_join() expected to be a reference, value given in /home/customer/www/annieandthebeast.com/public_html/wp-includes/class-wp-hook.php on line 307
 Here Comes the Sun, Part 3 – Annie & The Beast
Skip to content 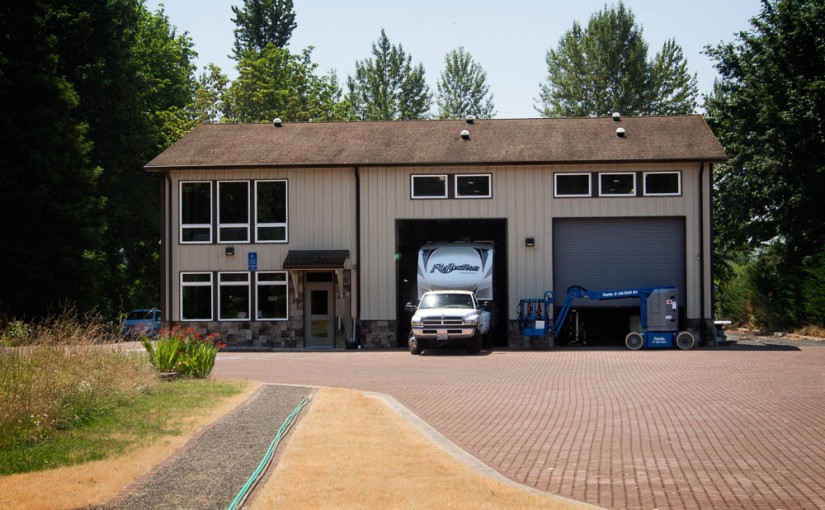 Our instructions were to arrive Monday afternoon so that we could plan the installation. Installation was to happen Tuesday and Wednesday. Monday and Wednesday nights we could stay in Annie at AM Solar, but Tuesday we needed a hotel room.

We arrived Monday early afternoon for the inspection and planning. Mitch, our installer, verified that everything on our electrical system worked, and after waiting for two other rigs, I pulled Annie into the larger of the two shop bays. We planned out the locations of the six solar panels using cardboard templates – one of their guys was on our roof moving the cardboard templates around while Mitch and I worked with him from their upstairs window that looks down on the shop. Plan in hand, I pulled the rig out for the night and we camped behind the shop.

Tuesday morning, I got a surprise. It turns out that they had one of the 60A solar controllers left on a shelf somewhere. Did I want it? Absolutely! We took over their waiting room with the dog and the cat. Not home or our rig, but pleasant. We found out that the fifth-wheel in the second bay was in for a story in Trailer Life magazine. Between someone working on a third unit (parked outside), Mitch on our unit and several people on the Trailer Life unit, progress was a little slow. Mitch worked on our controller and remote, but by days end the roof work had not started.

As things were wrapping up Tuesday, Greg, the owner, stopped over and pointed out that if we add panels later, they won’t be eligible for the solar tax credit. (There is currently a tax credit for adding solar to a home, and self-contained RVs are considered a home.) This was a tough decision, because while the six panels were a good compromise, they were a compromise. With six panels, the generator would be required for any extended dry camping. We could go all the way to ten panels, no need for the generator, take advantage of the current tax credit, all for only about 20-25% more than we were already spending. Which was still a fair amount of money. In the end, we went with the full ten panels. I really like having enough solar to live off of – but we’ll have to dry camp a lot to make it worthwhile.

The good news was that we were able to stay in our trailer again on Tuesday night instead of dealing with a motel. All of us appreciated that. It wasn’t just the money for the hotel room – transporting food, beds, toys, cat litter, keeping the animals in our hotel room, dealing with a pet friendly room (necessary, but meaning everyone else’s pet had been there before) – none of that was appealing.

By Wednesday morning, Oma was going a little stir crazy. She actually requested (and enjoyed) a fast-food burger for lunch! And it was another long day. AM Solar was determined to finish up our rig. They put two people on the roof, Mitch finished up the interior wiring including fixing a couple of wiring issues from the factory. The guys worked late to finish up, and shortly after 6:00 pm we were outside charging the battery using the remaining sunlight.

Thursday we got our walk-through, which was mostly getting the manuals and having Greg go through use of the solar controller remote panel. We also got to hear about his Nicaraguan property and trips, which was quite interesting. The painful part was the bill. Labor hours ended up higher than the original estimate (even accounting for the extra panels), and the extra panels of course also were not in the original plan. Now it’s up to us to get our money’s worth out of them.

Despite another heat wave with temperatures in the 90s (normal highs were 70s), we decided to live off the grid for the day to try everything out. We made it until about 3:00 pm. At that point, it was 90 degrees inside the trailer, the batteries were fully charged, most of the solar was going to waste, and the value of continuing without electrical hookups was much lower than the value of air conditioning. We’ll get a chance to do five days of dry camping in three weeks, so we’ll give them a thorough test then.

AM Solar were great hosts to us the week we were there, and they were great to work with. Because of the pets, they made sure we were able to stay in our trailer every night and allowed us to stay an extra night after the install was complete. Everyone seemed focused on providing the best possible installation, and Mitch and the team really took care to ensure the absolute minimum practical voltage drop from the panels to the controller. (Minimizing voltage drop is very important for maximum performance; extremely poor installations with excessive voltage drop can render solar panels relatively useless.)

The tax credit will help, but our 1000W solar install was not cheap and will probably never pay for itself just from lower campground costs. However, if we do enough dry camping, I’m certain that being able to stay in beautiful places on our terms, enjoying only the sounds of water, wind and wildlife will make solar a worthwhile investment for us.