Warning: Parameter 2 to wp_hide_post_Public::query_posts_join() expected to be a reference, value given in /home/customer/www/annieandthebeast.com/public_html/wp-includes/class-wp-hook.php on line 307
 Heading South – January 2020 – Annie & The Beast
Skip to content 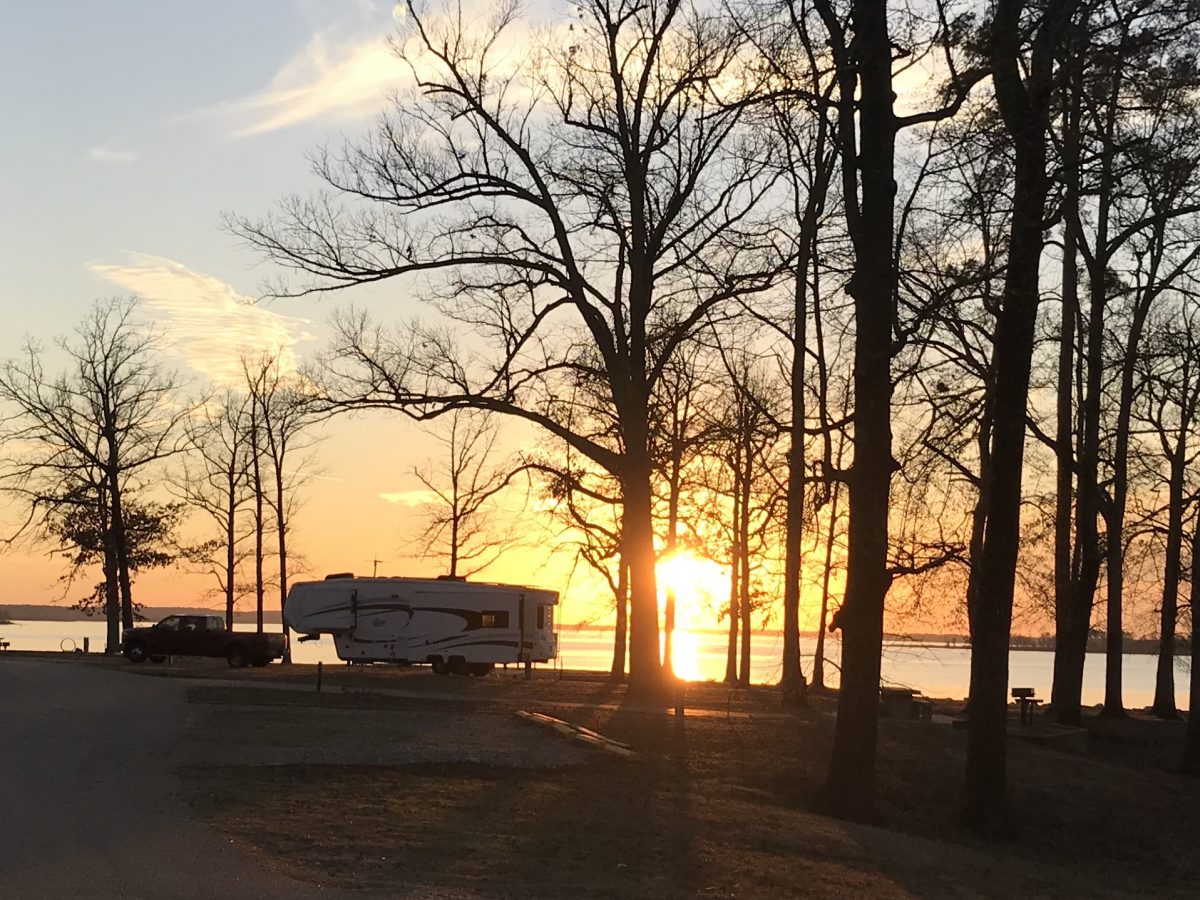 After a wonderful family Christmas, it was time to pack up and head south again to run away from the cold and snowy tundra. We watched for a good weather opening and took off. We want to officially begin our trip at Falcon State Park near the southwestern border of Texas where the US meets Mexico across the Rio Grande River. We seem to have a good plan now. Our first stop is at Double J campground in Chatham, Illinois. It’s right off the freeway with pull through sites, heated water lines, and nice clean bathrooms. It’s still cold there. Our second stop was Delta Ridge RV park in Forrest City, Arkansas. The RV park is conveniently located right off the freeway near Walmart and a lot of stores. It offers full hook ups and roomy pull through sites but there are no bathroom or shower facilities there. You need to have your own. An overnight stop and continue on.

We continue on through Texarkana and decide that we would like to stay at the U.S. Army Corps of Engineers park we discovered two years ago on Wright Patman Lake. There are several campgrounds there, but we like Rocky Point the best. When we were there a couple of years ago in spring, it was very flooded out. But this January, everything was just fine. The temperature was pleasant, mostly in the sixties. We only had time for two nights before we moved on. We did however, make reservations to return in March on our journey north.

We decided that the next point toward our destination was going to be Palmetto State Park in Texas. But that wasn’t meant to be. Shortly after driving through a very active construction zone, we had a tire blow out on the fifth wheel. We called Coach-Net, our emergency road service provider, to get someone to come out and change the tire.

Thirty minutes after calling, they called to say that our fifth wheel was not covered (only the motorhome that was sitting back home on our driveway). This was contrary to what their sales organization told us when we called to renew last year. So we spoke to a supervisor who said that he would cover the tire change just this one time. So we waited for an hour on the narrow shoulder of the highway before learning that our tire change wasn’t coming. The rep goes off to find someone else, and about 30 minutes later, the rep calls back and said it would be at least another 3 hours for someone to get to us.

We were only 12 miles away from Palestine, Texas, so we decided to just deal with it ourselves. Sure enough, by the third call, we found someone who said he get to us in 25 minutes. When taking off the blown tire, he noticed brake fluid on the tire. So one problem resolved, but now we had a 17,000 lb. trailer with essentially no brakes.

The brakes were more complicated than the tire change. We called one place, who gave us two other people to call. Of course, they were not answering their phones. After leaving messages, we got a call back from the daughter of one of the guys, but her dad had just had surgery and wasn’t working yet. But they gave us yet another name to call, and he was willing to do our repair first thing in the morning. He also offered to let us stay on his driveway for the night. Unfortunately, he was also 30 miles away. It was no fun getting there. We drove extremely slowly, with 4-way lights flashing and mostly in the shoulder, but we eventually got there safely.

We promptly cancelled our Coach-Net road service and signed up with Good Sam. I don’t know for sure if Good Sam will be better, but they can’t really do worse than Coach-Net did.

The next morning, our local mechanic had us fixed and on the road again by 11:00am. Hopefully, it will be an uneventful ride to Palmetto State Park.