Warning: Parameter 2 to wp_hide_post_Public::query_posts_join() expected to be a reference, value given in /home/customer/www/annieandthebeast.com/public_html/wp-includes/class-wp-hook.php on line 303
 Coastal Wrap-up – Annie & The Beast
Skip to content 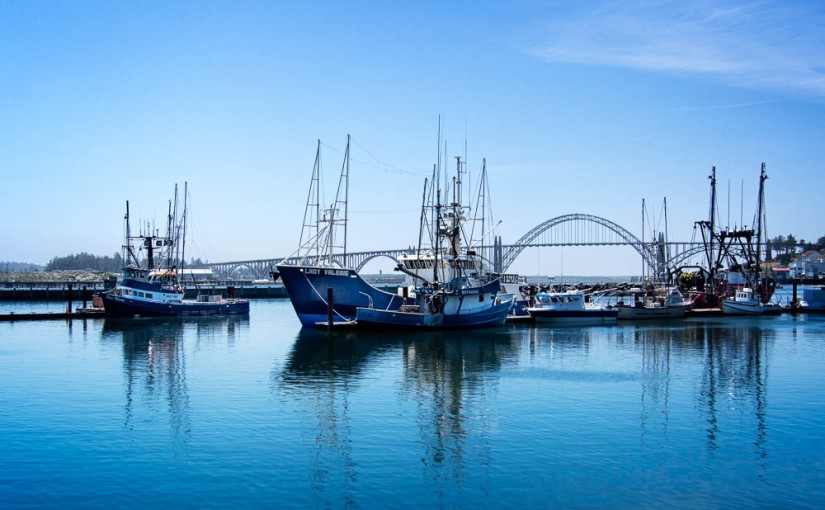 It took 47 days and 4,100 miles to arrive on the Oregon coast, our destination for this trip. On the way, our average travel day was 280 miles, and our average stay was three days. That pace isn’t so bad if you’re young and used to cranking out miles during your two-week vacation, but we confirmed that it’s a much faster pace than we prefer at this point in our lives.

Contrast our early pace with our time on the coast. Even including our detour inland to get solar panels installed, our average travel day since arriving in Oregon was only 120 miles and our average stay was over five days. This was a far more relaxed and much more enjoyable pace for us.

While our National Park swing through Arizona and California was awesome, it was great to finally make it to the coast. The beach was nice and had picturesque rocks just off-shore. It was not far from California redwoods, and I really enjoyed our backtrack to northern California to see an area of Redwoods that I hadn’t seen before. The Samuel H. Boardman Scenic Corridor was just north of the park and netted us our only whale sighting on the coast. It was a great start to our coastal experience.

That said, our site at Harris Beach State Park was not ideal, so much so that getting into it impressed the neighbors. There were better sites – we just didn’t snag one on this trip. It did teach us that unless we really, really want to be someplace, we should look for alternative campgrounds when we can only get a marginal campsite at a state park.

Full hookups, a nice beach at the campground, a nice town (Bandon), the best single dish we had at a coast restaurant (line-caught roasted butterfish with a mildly asian preparation), and a great beach and scenic area on the Bandon side of the estuary with the best tide pools we found this year – the only thing we didn’t have was enough time. This is definitely someplace that I’d like to come back to and spend more time at.

While I hope that we don’t need to return, at least for 10-15 years, I’m very pleased with our solar installation and am glad we went with the full 1,000 watts. And I don’t think our stay could have been too much nicer under the circumstances, with a pleasant waiting area and being able to stay in our home every night.

This was another nice park and area. The trails to the beach were mostly paved which made the walks a bit easier on Oma, and our campsite was reasonably sized, especially with the open area between the trailer and the dunes. The Hatfield Marine Science Center was very nice and informative (and free). The aquarium was nice enough although I think a bit overpriced for what it offered. The Yaquina Head Outstanding Natural Area was … outstanding … with lots of wildlife and a really great lighthouse tour.

However, this was the point where the state parks really started to seem loud and busy. Between the upcoming Fourth-of-July holiday and the summer “school’s out” season kicking off in earnest, there were a lot of louder groups and a lot of kids. It wasn’t horrible, but I definitely was missing the relative quiet of May and early June.

This was our shortest drive between campgrounds of the trip, fourteen miles, and it is a record that may stand for a while. The RV park/marina was a really good choice for the busy Fourth-of-July weekend. While it was full, it was not loud and there were relatively few kids. (I like kids. But I also like peace and quiet. Call me old and grumpy, but a noisy park full of other people’s free-range kids is not my preference.) The park was mostly well maintained, and the full hookups allowed us to get wash done and enjoy all the comforts of home.

With our brake actuator issue and being unable to contact anyone over the holiday weekend, we decided to extend our stay at the RV park/marina … three times in fact. While we had to be mindful of our electrical, water and sewer use (we were dry camping), it was a really great place to stay. During the week, there were never more than three other sites in use (out of 27 total), and even on the weekend the dry camping area was only about 25% full. That gave us tons of space with views of the water out nearly every window. We were able to get the couple of days of down time that our bodies demanded in a beautiful setting, and we got a good test of our solar capabilities and limitations.

It also wasn’t a bad base to explore from. Newport was only about 20 minutes north (although we had explored that reasonably well while at South Beach State Park). From Waldport, we explored Yachats, just 15 minutes south, and we explored different parts of Cape Perpetua over three days. There were lots of beaches (Seal Beach was our favorite of the ones we visited), and if we had been there even longer, I’m sure that we would have explored further up and down the coast. I could easily imagine spending two or three weeks in the dry camping area here with the occasional night or two in a full hookup site when we needed to dump, fill the water tank and do laundry.

Our final stay on the Oregon coast was not in Oregon but in Washington. Cape Disappointment is just across the Columbia River from Oregon.

Cape D (as it’s called) was a great wrap-up to our coastal month. The Lewis and Clark Interpretive Center in the park was well done (although text-heavy) and ties in with our trip through the Columbia Gorge as we work backwards along the last part of their journey. The beach and Pacific Ocean were an easy walk from our campsite. The large mouth of the Columbia River abuts the park as well. The park features not one but two lighthouses, one open for tours and the other still in use by the Coast Guard. Although apparently one of the foggiest places in the USA (Wikipedia claims that Cape Disappointment receives about 2552 hours of fog a year – the equivalent of 106 days), we mostly had sunny days and no fog at all.

Five months in advance, we were only able to book Sunday – Thursday (four nights – it’s a popular park) and so we only had a few days there. The only negative to the park for me was that there is no cell coverage at the campground, so this actually turned out to be the first time we’ve had no internet (wifi or cell) in our trailer. In the past, when having no internet meant getting a reprieve from work email, I didn’t mind. Here, I found myself mildly annoyed and we definitely missed the convenience. Even with no internet, I hope we can come back and spend more time since there is a fair amount to explore outside the park that we did not get to.

We stood on the beach with Coda, looking out at the Pacific Ocean, much like we’ve done at some point most days since we reached the coast. It was cool and somewhat cloudy. The beach was nearly empty, which seemed normal to us – even at their busiest, we’ve never had problems getting at least a few hundred feet of beach to ourselves where we can run the dog off-leash, and frequently, like today, there are only a few other people visible as far as you can see.

It was a little sad knowing that we would not be seeing the ocean again this summer. We’ve had one or two beach walks most days – it was part of our routine. We had seen eagles, thousands of sea birds, seals and a lone whale. We had our sunset routine. Oma had enjoyed the kind of fresh seafood only found on the coast. We had enjoyed temperatures in the 60s every day, while there was a heat wave inland. (Portland has already had more 90+ degree days in June and early July than they normally have all summer.)

As we pulled away from Cape Disappointment and headed inland to get our brake actuator replaced, we were really starting the trip home. We’re not taking the direct route … yet. There are still lots of things to see and places to explore before we get home. And we’ll meet up with our daughter and her family when we get closer. Home is good – we still love our house and aren’t ready to full-time. But it is still the beginning of the end of this wonderful trip, and I’m not ready for that yet.