Warning: Parameter 2 to wp_hide_post_Public::query_posts_join() expected to be a reference, value given in /home/customer/www/annieandthebeast.com/public_html/wp-includes/class-wp-hook.php on line 307
 Buckinghorse River to Muncho Lake (Alaska Highway miles 171-432) – June 2018 – Annie & The Beast
Skip to content 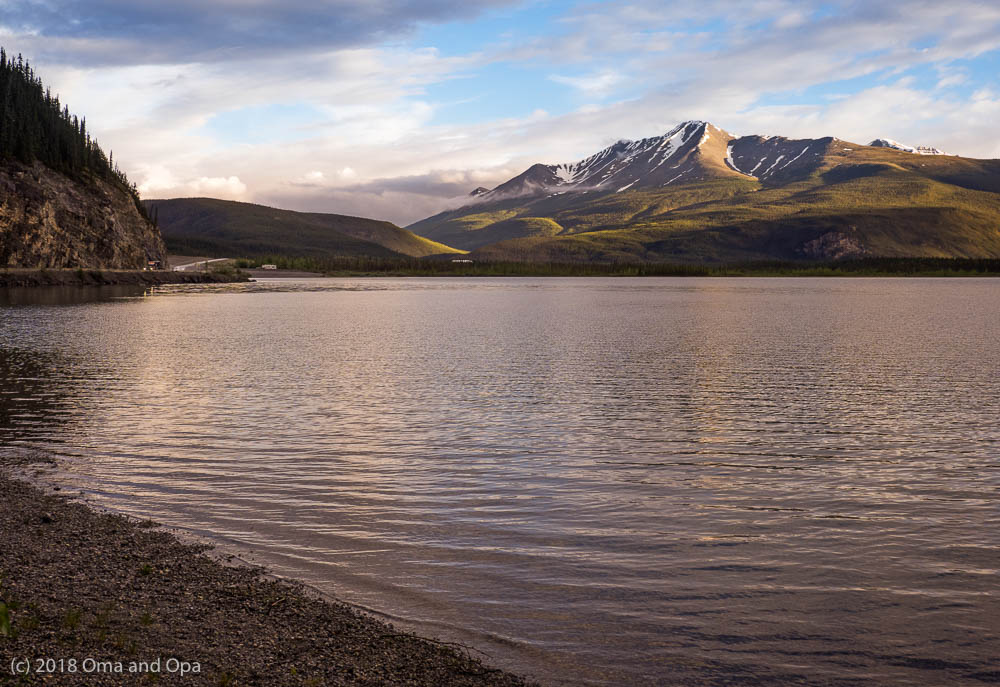 It has been raining in the evening frequently, but the majority of our days had been mostly dry. Today it rained all night and did not get the message to stop. At least we were not in a tent. There were quite a few tenters in our campground last night, and I felt sorry for them this morning. 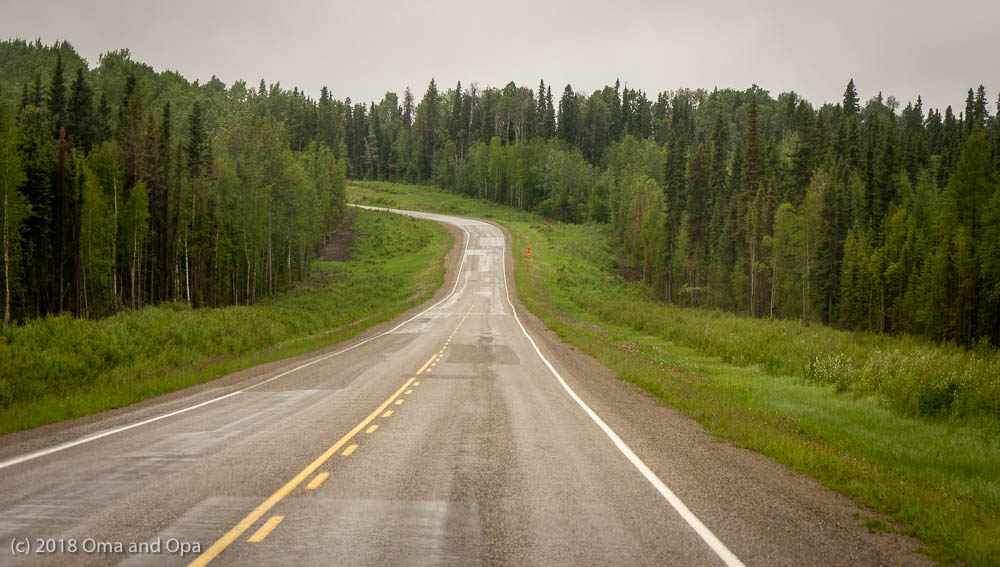 We hit the road, heading for the only city we would see today, Fort Nelson. We stopped at a quilt shop outside of town and down a rural road about a mile because they had advertised in the Milepost. We were about to give up just when we got there, as we had no idea where we were going. Despite being a little off the beaten path, Oma loved the woman’s fabrics and actually bought a few things.

We fueled up in Fort Nelson. The guidebooks described one local museum in town near the visitor center, but Oma wasn’t particularly interested today, so we blew through town and continued on our way. Perhaps she was looking forward to cinnamon rolls. 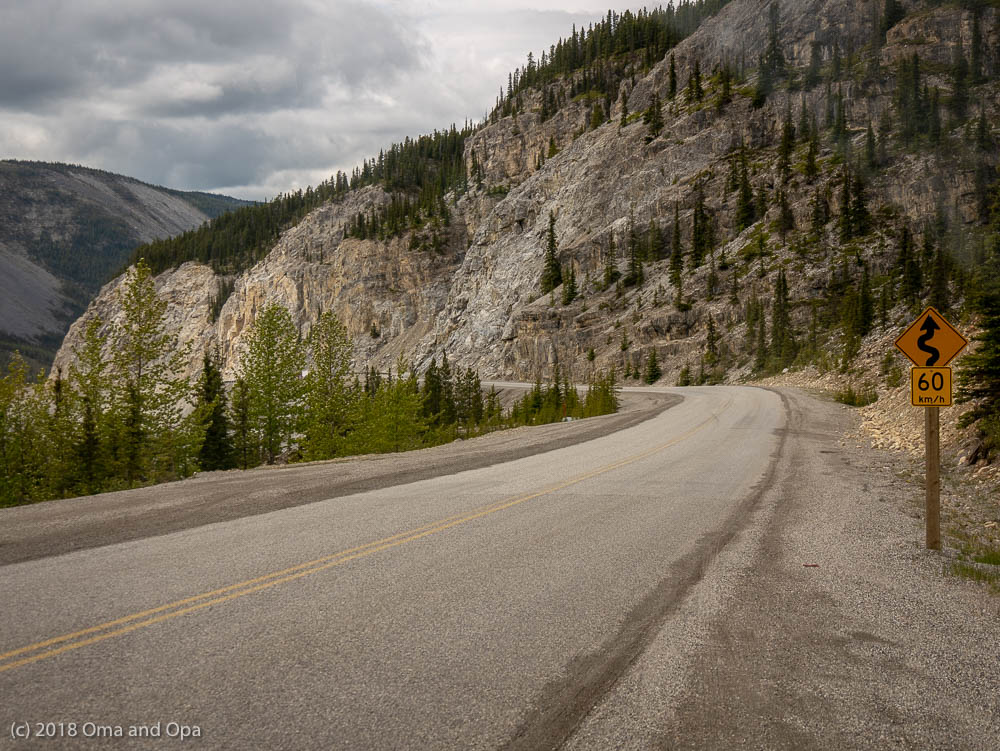 The rain continued as we entered the mountains. The stretch of Alaska Highway from Fort Nelson to Watson Lake (about 300 miles) crosses the Rockies. Unfortunately, as we climbed to the top of our first pass, we had to pass by the scenic overlooks since we were enveloped by rain and fog and visibility was only a few hundred feet. Driving was slow.

After dropping back down below the clouds, we eventually came to Tetsa River Lodge. Tetsa is well known for their cinnamon rolls, and they apparently bake about 400 per day in season. One of the beautiful mountain viewpoints would have been perfect for lunch, but that didn’t work out with the fog. Besides cinnamon rolls, Tetsa also offered soup, and it was definitely a great soup day (besides the rain, the temperature had not yet made it over 43 degrees), so we had a couple of bowls. While there, we ran into several people from our campground the night before. 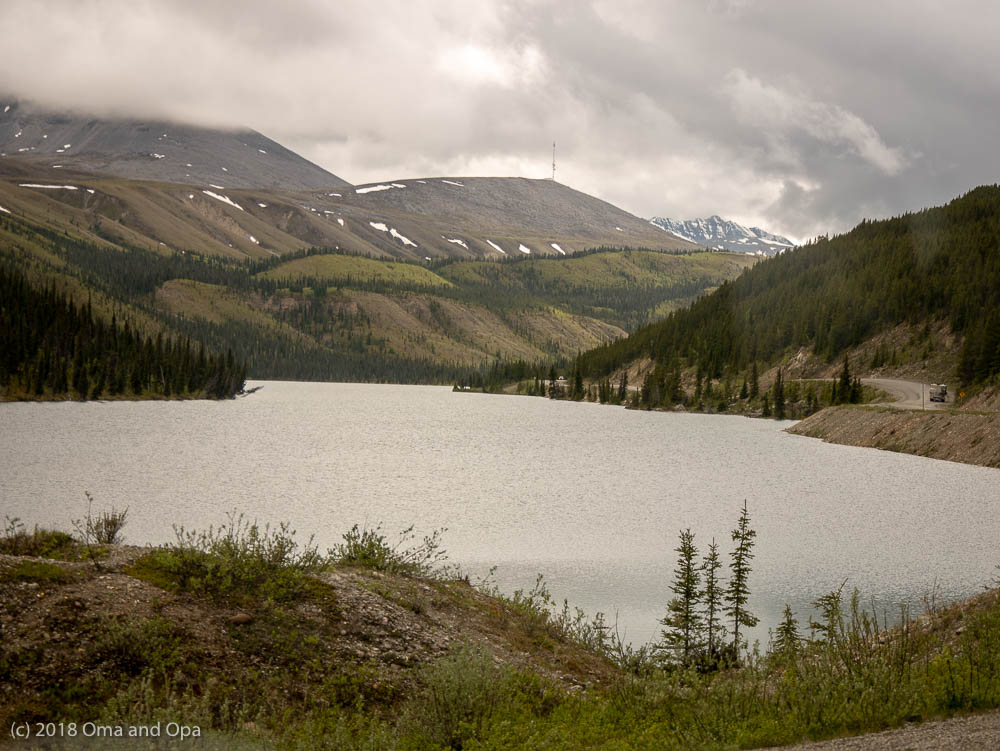 The soup not only warmed us up, it also improved the weather. After lunch, the rain eased and we started getting occasional glimpses of sunshine. We passed Summit Lake (Stone Mountain) Provincial Campground. It was a beautiful setting, but there was no privacy, it is very exposed to bad weather, and one of the obnoxious class A’s from the night before was parked in the campground entrance, blocking anyone from coming in. We decided to move on. 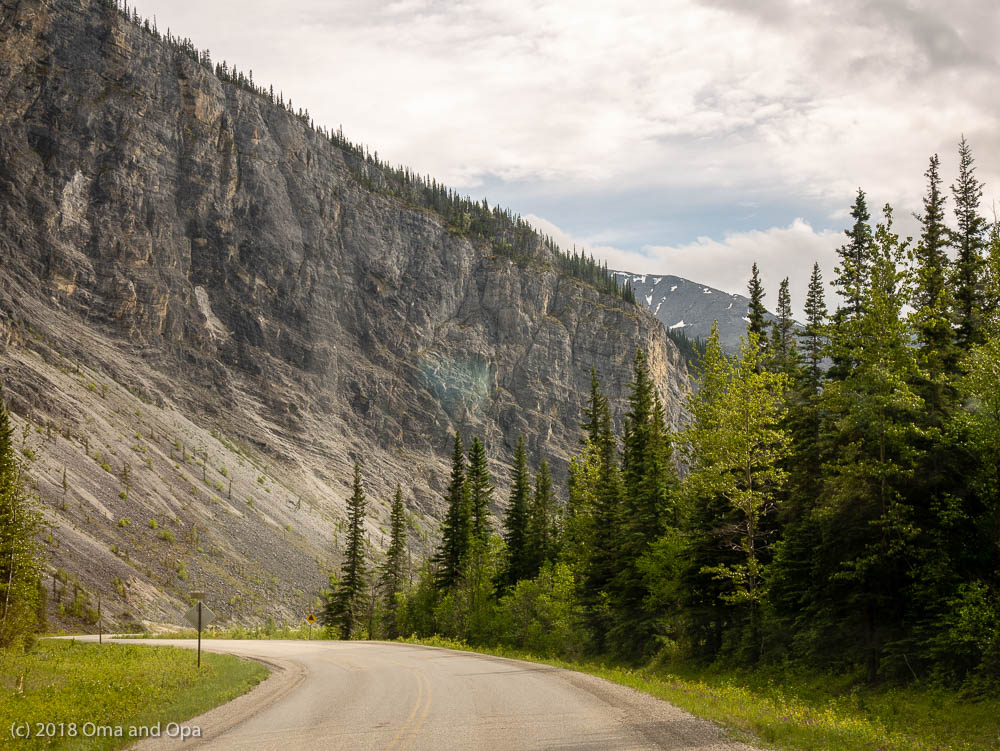 After Tetsa River Lodge, we hit our first major Alaska Highway construction. We lucked out in one sense, as we showed up just as our direction got its turn through the construction and did not have to wait. It was a very long stretch (probably nearly ten miles total), with two-thirds of it being very dusty gravel. The down side of being at the tail end is that we often couldn’t see more than 20-30 feet ahead of us since everyone else’s dust obscured our vision. After leaving the construction, we became a caravan of twenty or thirty vehicles all driving together until we reached our next stop, Toad River Lodge.

Toad River Lodge is another classic Alaska Highway roadhouse. The roadhouses are disappearing due to changing times (more RVs, better roads, changing tastes), but some remain. Toad River had campsites with electric and wifi along the river, and was also considered to have fairly good food. Two sites along the river were available when we arrived, but of course they were the least desirable of them. We had two more opportunities for waterfront campsites still, so we fueled up (nearly US$5.00 per gallon out here in the middle of nowhere) and moved on.

By this time the long line of vehicles that had accumulated at the construction had dispersed, and we got our first big breaks of the day. The huge one was a group of stone sheep on the side of the road. There was actually a shoulder, so we pulled over at a reasonable distance and enjoyed five minutes watching and photographing them. Very cool, definitely the highlight of the day, as neither of us had ever seen stone sheep before.

Eventually, several other vehicles came along and decided to drive right next to the sheep to take their pictures. It doesn’t take a genius to know how that turned out. But just a little ways further we came across two carribou (reindeer) along the road. And we had photo opportunities for two black bears. We’ve seen lots of black bears (five or six in a day isn’t unusual), but good photo opportunities are less common.

Around 5:00 pm, we made it to Muncho Lake, a large, scenic lake and a highlight of the stretch from Fort Nelson to Watson Lake. There are two provincial parks on the lake, with Strawberry Flats (Strawberry Fields according to Oma) located at the southern end. Strawberry Flats still had several campsites on the lake open, so we grabbed one and decided that this would be a perfect location for a rest day tomorrow.