Warning: Parameter 2 to wp_hide_post_Public::query_posts_join() expected to be a reference, value given in /home/customer/www/annieandthebeast.com/public_html/wp-includes/class-wp-hook.php on line 307
 A Volcanic Experience – Annie & The Beast
Skip to content 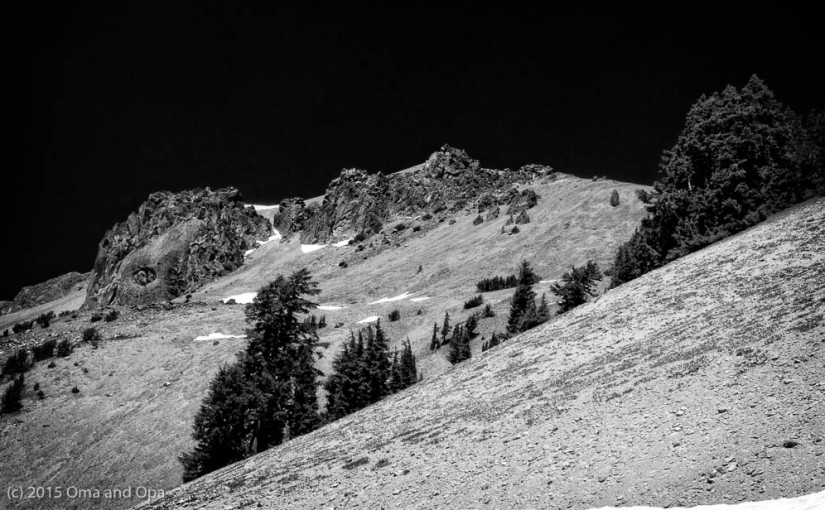 Lassen Volcanic National Park lies more or less along the way from Yosemite to Oregon, so naturally it got put on our itinerary. I honestly didn’t know a lot about it, and didn’t really investigate it at all. I assumed that there would be some old, interesting volcanic features – which there were. What I didn’t realize is that Mt. Lassen last erupted only 100 years ago in 1915. Of the Cascades volcanoes, only Mount St. Helens has erupted more recently (in 1980).

Our drive to Shingletown, California (just outside of Lassen National Park) was uneventful. We considered staying in the national park, but there were no hookups and we did not want to rely on the generator. Instead, we stayed at our second KOA of the trip, which was very nice. Great people, a fairly small park, lots of tent sites and lots of woods. It would not have been bad if it was packed; not being full and with a site in the back, it was great and most of our views were out into woods. 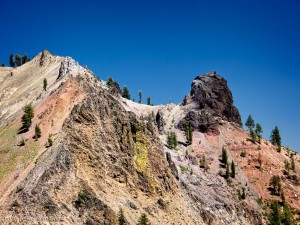 Oma was a little sore, so we did a leisurely drive through the park, stopping at all the waysides and parking areas and doing a few short walks. Since we came into the park from the north, we had to drive the entire park road before reaching the visitor center in the south. We checked out the park movie and exhibits before retracing our route home.

We took the challenge to hike the Bumpass Hell Trail. I think that Bumpass Hell is the most popular thing in the park, perhaps as much for the name as the place itself. (They sell Bumpass Hell t-shirts and hats in the park stores.) Kendall VanHook Bumpass was a miner who guided people into the area and lost a leg after breaking through the crust into the scalding mud below. Although similar in many ways to some of the geothermal areas in Yellowstone, it has a different feel since the rest of the environment is different.

I’m not sure how much busier Lassen National Park gets on the weekend (it’s not that close to any big population centers), but we still decided to save our most off-the-beaten-path hike for the weekend. While the hike is in the National Park, it requires going around the north end of the park and entering from another direction, then heading down a gravel road to get to the trailhead.

While I’ve seen a variety of volcanoes, this was my first cinder cone. It was very cool to see and climb one. This was also the first volcano that I went down to the bottom of the crater, which was actually pretty deep. Current thinking puts its age at about 350 years old.

In three days, we were able to check out about 2/3rds of the park. Park visitation, at least while we were there, seemed pretty light and certainly not overrun with people. It was tempting to stay a while longer, but after a month and a half of travel, we are finally heading to our “destination” for this trip – the Oregon coast.

2 thoughts on “A Volcanic Experience”