Warning: Parameter 2 to wp_hide_post_Public::query_posts_join() expected to be a reference, value given in /home/customer/www/annieandthebeast.com/public_html/wp-includes/class-wp-hook.php on line 307
 A Day in Dawson Creek – June 2018 – Annie & The Beast
Skip to content 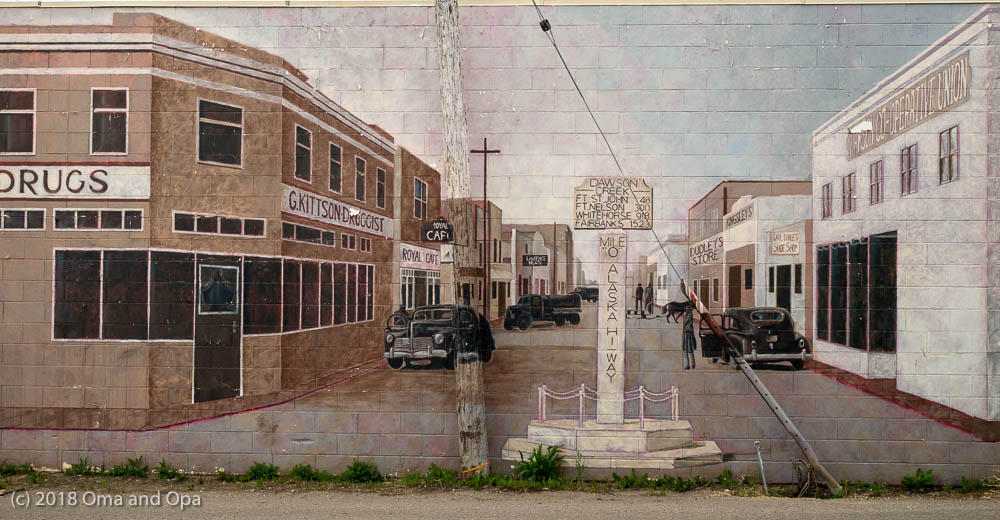 After dinner and dessert with our friends, we spent the next day in Dawson Creek doing laundry and checking out the visitor’s center, mile 0 markers (there are two, in different places), Alaska Highway House and some of the murals. We also took advantage of the liquor store next to the visitor center to restock wine and beer for the remainder of our drive through Canada.

Dawson Creek is the start of the Alaska Highway. It had a population of around 500 in early 1942 when, following the Japanese attack on Pearl Harbor, the government decided to build a road to Alaska. Thousands of troops “invaded” Dawson Creek to begin construction, and as the end of the rail line, the town remained important throughout World War II for men and materials working on the road.

The things we wanted to see were in the center of town. Our campground was about 1.5 miles away, and while it was windy, we chose to get some exercise and walk it, which allowed the animals a day off from traveling. Highway 97 (the Alaska Highway) by the campground was busy and did not have sidewalks, but there was a walk/bike trail that meandered along the edges of town. We took that and got more than our three miles in, but despite wandering through wetlands, the windy conditions kept mosquitos away.

There is a walking tour of Dawson Creek. We did not formally do it, since we’d gotten enough walking through town already, but we saw some of the sights. The town has murals painted on the back of some buildings depicting older city scenes that were quite well done. We saw some of them, and if you have the time and inclination, you could definitely seek them out. 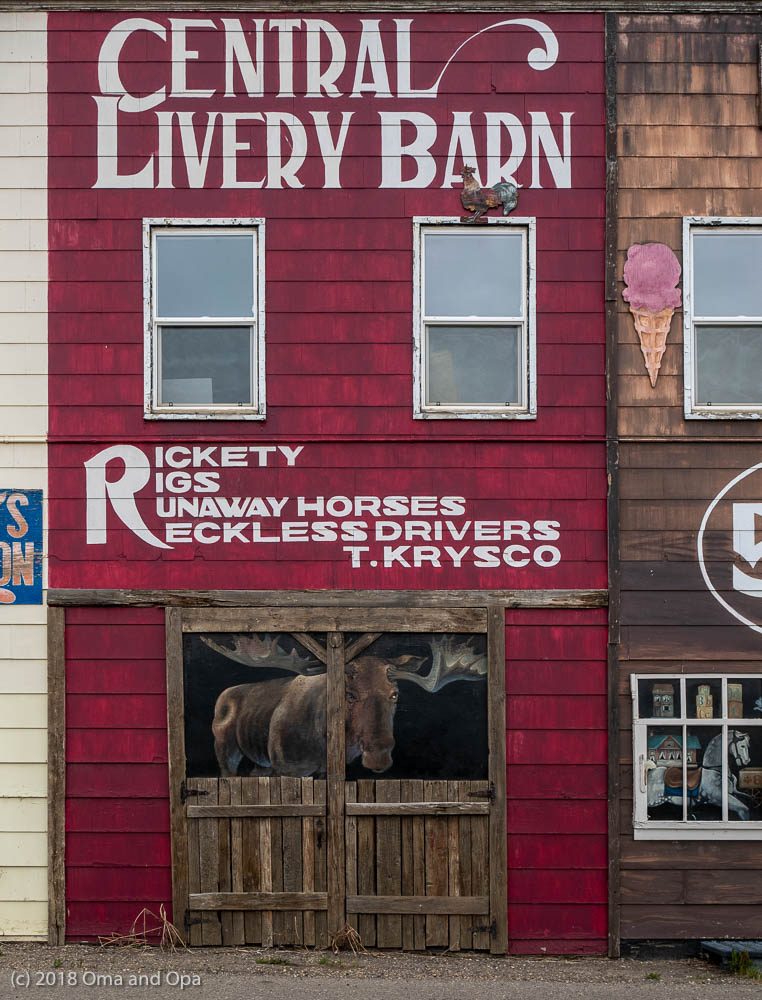 The Alaska Highway House was fine. They showed a very interesting hour-long PBS documentary on the building of the Alaska Highway. They have some other – mostly written – exhibits, many that repeat the information in the video. It’s worth the $5 if you haven’t seen the documentary before and want to spend an hour watching it.

A replica of the mile marker 0 is in the center of the street across from the Alaska Highway House. Apparently this is the third one – the first was destroyed when it was run over by a driver and the second was apparently the subject of frequent pranks and kidnappings. This one is not actually on the Alaska Highway, but it still seems to be a mandatory photo op. 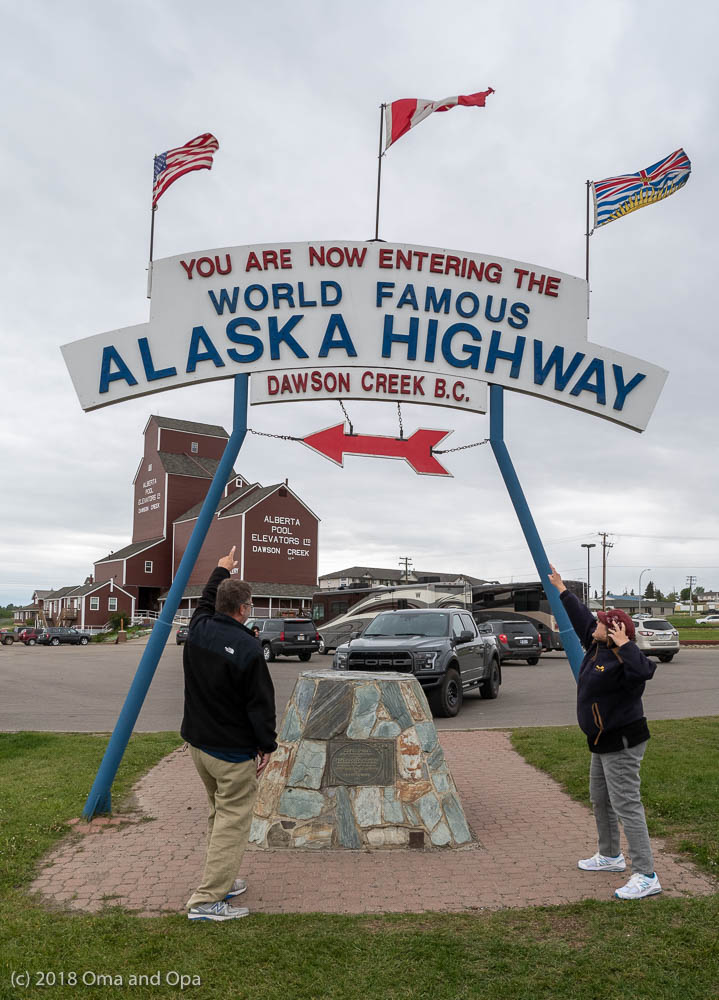 The real mile 0 cairn is located near the visitor center. Parking is easy (it’s a huge lot) and it seems like pretty much everyone who heads up the Alaska Highway takes their picture there. We met someone else from our home state and we took each others pictures.

The visitor center had a bunch of brochures and maps. The most useful thing they had was a listing of gas stations by mile including whether they had diesel and propane. That looks to be very handy. The girl was pleasant but not incredibly helpful. Other than handing out some standard maps and literature (like that handy gas station list), she didn’t seem to know much or particularly care. It was still worth a stop, and if there had been major roadwork, weather or events nearby I’m sure we would have gotten that information. It was just a very different experience than say the great visitor center staff at Mt. Robson.

The BC Liquor store next door to the visitor center was good sized and pretty well stocked. Because wine bottles are heavy and don’t fit well in our small motorhome, Oma is drinking (decent) boxed wine, which is actually pretty common among RV’ers just because of the practicality. I don’t know if most BC Liquors have a large selection of boxed wine or if this one is unusual since so many RV’ers pass through, but they had a lot of options.

The Walter Wright Pioneer Village is located in the same park as the campground. We made a quick run-through. It is pretty typical of similar sets of buildings. Many building interiors were nicely done. Some were filled with more of a hodge-podge of donated stuff. Donations are requested but there was no admission fee. 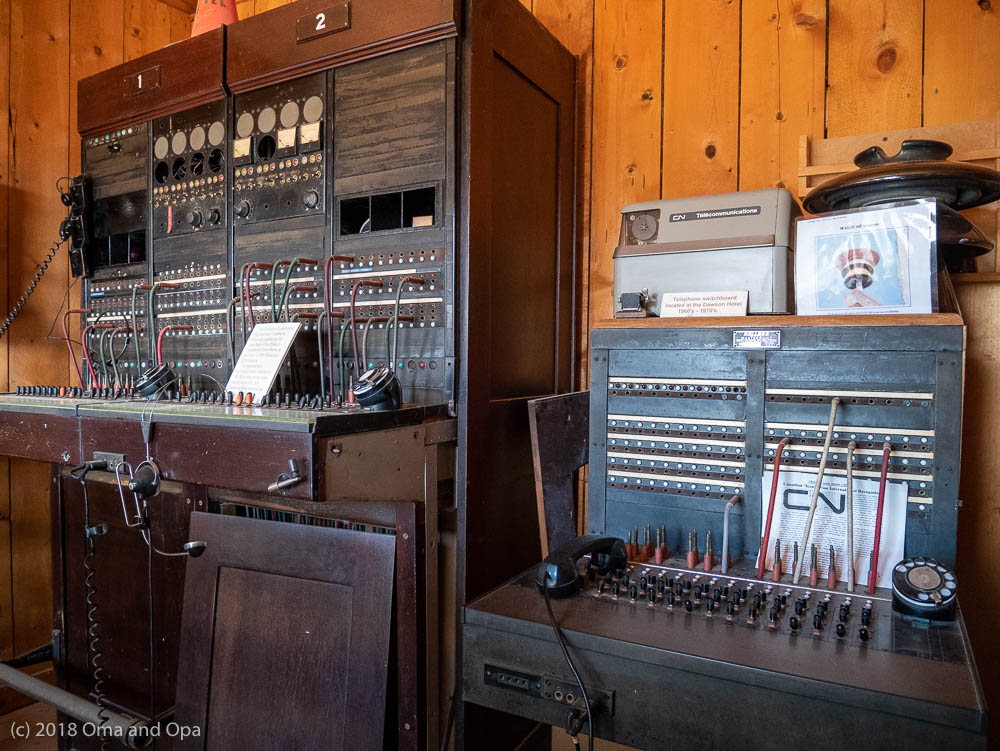 The next morning turned into a social hour with visits from another RVing to Alaska member and our neighbors with a 1980s-era VW campervan. It was great to connect with more people, although it did delay our departure.

Mile 0 Campground was fine, and what I’m imagining a decent northern Canada/Alaska RV park to be. Some trees and okay site spacing, but a long way from beautiful. Sites were semi-level with some better and some worse. Wifi was good and utilities were fine. There was some highway noise as you are right on the Alaska Highway, but it didn’t really bother us. Given the other options, we’d stay here again (although I hear Northern Lights is also decent).